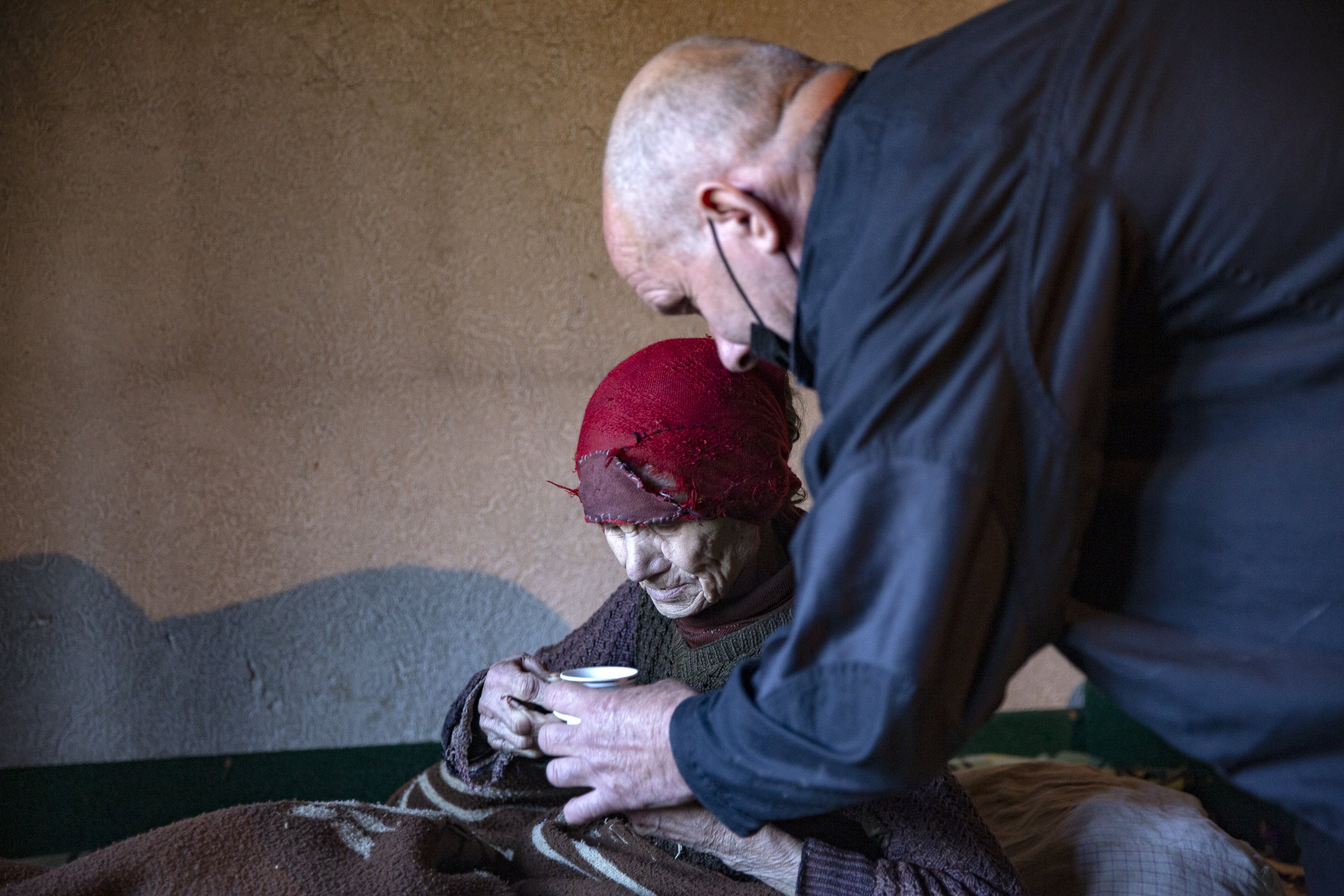 VAGANESH, Kosovo (AP) – 92-year-old Blagica Dicic is the only resident of a remote village from an ethnic Serb minority in the mountains of eastern Kosovo that has been abandoned by all other residents – including her own children.

George, the eldest son, has moved to the Serbian capital, Belgrade, and has no place for her. He can’t remember the last time they met.

The younger son, Slobodan, lives in council-provided housing in the nearby town of Kamenica with his paralyzed wife. He rarely visits Dicic.

But now she feels she has a new son. Even more remarkable is 54-year-old Fadil Rama, who comes from the other side of the bitter ethnic division in Kosovo, being a member of Kosovo’s ethnic Albanian majority and a Muslim.

“I have three sons, not two,” she said, lying in bed with two blankets to cover her in her small home in the village of Vaganesh, 45km (30 miles) east of the capital, Pristina.

“Fadil is the other one who brings me food and takes care of me,” she said, leaning on one elbow as she stroked Rama, who lives less than a kilometer from the ethnic Albanian village of Strezovce.

Until the beginning of November, Dicic was in good health, but now he has become weaker and has difficulty getting up. Still, she refuses to move out of her dilapidated two-story home, surviving on a 60-euro ($ 71) monthly pension and no other official support.

This is one of about 50 houses built of stone and wood, which are slowly crumbling from neglect.

Before the 1998-1999 war, more than 200 people lived there. Now they are gone, the last being Dicic’s son Slobodan when his wife fell ill three years ago.

The war in the former Serbian province killed more than 10,000 – mostly ethnic Albanians – and ended after a NATO bombing campaign forced Serbia to withdraw its forces fighting an ethnic Albanian uprising.

The United Nations ruled the territory for nine years before Kosovo declared independence in 2008, which Serbia does not recognize. Relations between Belgrade and Pristina remain strained.

Rama, who owns a small grocery store, has known Dicic since he was a boy, and she has always had a gift for Strezovche’s children, even during the fighting.

“She was such a good woman before, during and after the war and she treated us like her children,” he said. “When I learned that she was left alone, I felt very sorry and thought of returning her good deeds.”

“We are not interested in the politics of Belgrade or even Pristina, because we have always supported each other,” Rama said.

After the outbreak of the coronavirus in March, Rama visited her twice a week, bringing food.

He cleans her room as much as he can, lights the stove and settles down to cook for her.

Rama said he saw nothing strange in helping an elderly Orthodox Christian Serb. His villagers agree.

“Why? To help an elderly lady? A Serb? And what?” Two men in Strezovce replied together. “Good for him.”

After the war, Vaganesh had no drinking water. Dicic used to go to Strezovce for water and basic supplies, but now it is too fragile.

Rama says local shepherds who heard he was helping her followed his leadership, visiting Dicic regularly, “to see how it was and to bring water or something.”

He gave his word to Dicic’s son, Slobodan, that he would take care of her until the last minute of (her) life with everything I have.

“I will never leave her alone,” Rama said.

A Good Thing is a series that highlights people whose actions sparkle with joy in difficult times – stories of people who find a way to make a difference, no matter how small. Read the storybook at https://apnews.com/ hub / one-good-thing

The Pope, who commemorates the Holocaust, warns of another possible genocide

53 died in the crash of Cameroon by bus and truck