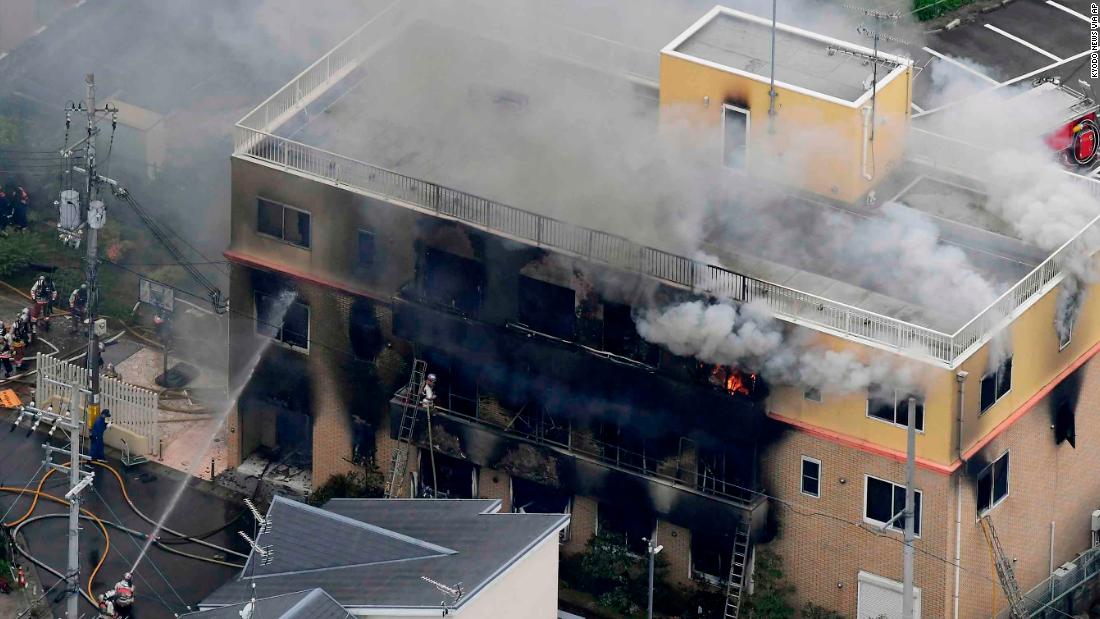 The suspected arson attack on Kyoto Animation on Thursday has left anime fans world-wide grieving the loss of life and a studio that claimed to put its employees first and was a major force in the industry.

Twelve men, 20 women and another individual whose gender was unknown died in the blaze and 35 were injured.

After dousing flames, firefighters entered the building Thursday morning and found 20 bodies lying on the staircase leading to the third floor. Another team found 11 bodies on the second floor of the building and two on the ground floor.

Police said that 74 people were inside the building, in Kyoto's Fushimi-ku district, at the time of the blaze, including the employees of the company
The attack was the worst mass killing in the country since 2001 an arson attack on a building in Tokyo's Kabukicho district, which killed 44 people.

Anime fans and mourners Friday started visiting the building and laid flowers in tribute to those who had lost their lives.

19659002] "I was so encouraged by the KyoAni works," said one young fan, calling the studio by its popular name. "I have no words to say in sorrow."

saying that he was left speechless at the "gruesomeness of the crime," and offered condolences to the victims

The fire started at Kyoto Animation's 1st Studio at 10:30 am local time on Thursday (9:30 pm ET) after a 41-year-old suspect started pouring what appeared to be gasoline on the first floor of the studio before setting it alight.

A policeman said a local resident reported hearing an explosion-like sound coming from the building around the time the fire broke out.

A witness told police the suspect shouted "Die!" as he spilled the unidentified liquid. The man was later found to be carrying a backpack containing several knives, according to the Kyoto police

Another eyewitness told CNN affiliate TV Asahi that the suspect said, "They plagiarized," when the police officer who detained him asked for a reasons.

Officials were unable to question the suspect Thursday as he was receiving treatment for severe burns sustained during the attack.

Footage from the scene Thursday showed a thick smoke billowing out of the four-story building, located in a residential area several kilometers south of Kyoto Station. It took four hours for firefighters to bring the blaze under control.

'A terrible loss for both humanity and art'

Kyoto Animation's CEO Hideaki Yata told reporters the company had received death threats by mail, which had been sent to the police, and expressed sorrow that workers in the industry had been targeted.

"They are the people who carry the Japan's animation industry on their shoulders."

Founded in 1981, Kyoto Animation – – known as KyoAni – has made a name for itself producing high quality animations that draw on both the mystical and the mundane.

Among Japan's best-known studios, its popular works include "Free !," the manga series "K-On!", The anime TV adaptation of "Melancholy of Haruhi Suzumiya" and "Violet Evergarden," which Netflix picked up in 2018.

On its website, the company said its philosophy included promoting a "humanitarian" corporate culture and "promoting the growth of people."

Writing for CNN, Susan Napier, Goldthwaite Professor of Rhetoric and Japanese Studies at Tufts University, said KyoAni had "developed a reputation for being a unique workplace" by employing writers on a salaried basis and "offering the money and security that allowed them to create works of high quality. "

The studio also operated a school for animators.

Napier said the destruction was a "significant loss, both in terms of the terrible tragedy of human life and the lost creative work that may have been stored in the studio over its almost 40-year existence."

The United States is suspending private charter flights to Cuba