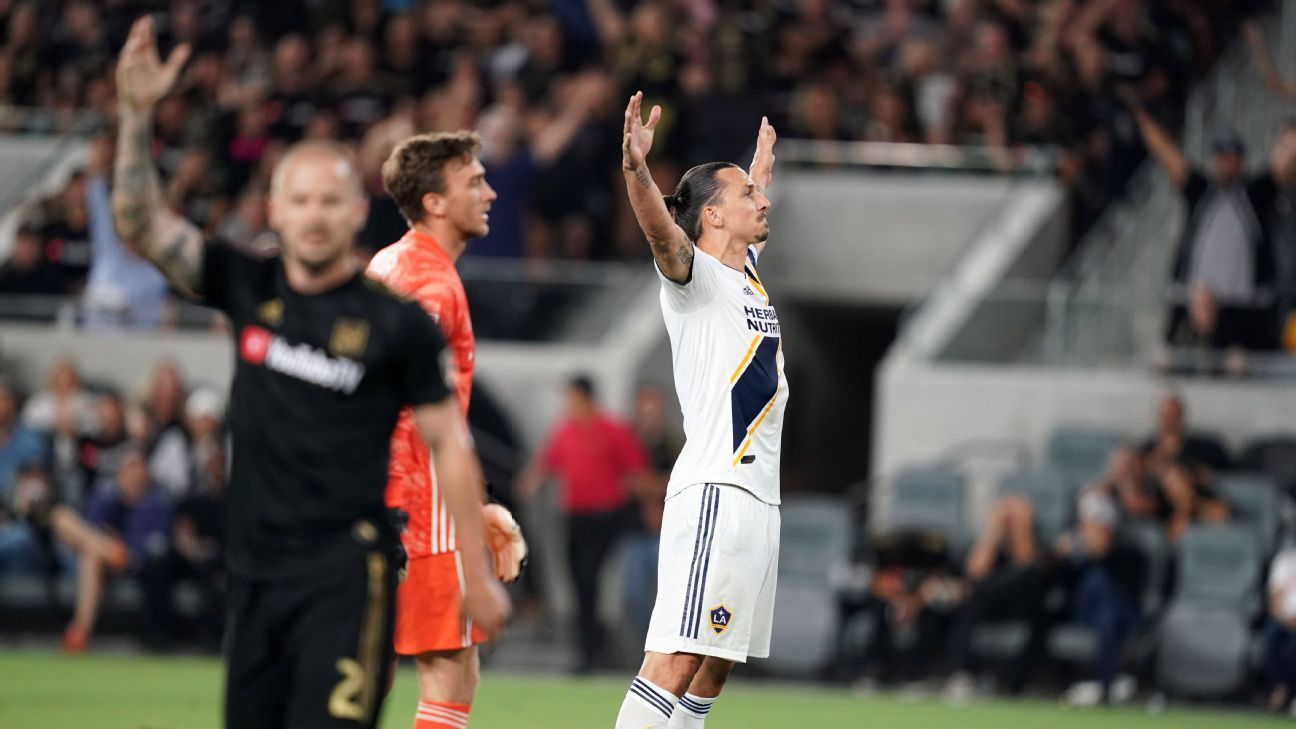 Carlos Vela scored a goal in the 53rd minute and LAFC was able to salvage a 3-3 tie against visiting LA Galaxy on Sunday night – though the club remains winless in two seasons against its crosstown rival.

latest chapter of the 17-month-old El Trafico derby played in another atmosphere of unusual passion and excitement in the often laid-back Los Angeles. Although LAFC only came into existence last season, the teams have created an instant rivalry with their spirited supporters 'groups, premier individual talents and immediate knack for playing thrilling games.

"If they don't beat us, they don't beat us," said Ibrahimovic after the game, who celebrated both of his goals in front of the LAFC supporters' section. "What can I say? I enjoy it when I play against them. I enjoy playing in this stadium."

Their supporting casts also get fired up by the rivalry. Latif Blessing had extra motivation after his friends told him about the billboards way up around the Banc of California Stadium this week showing Ibrahimovic knocking him down during his club last meeting with the LA Galaxy.

"I was mad," Blessing said. "It was so disrespectful. I felt now. I felt like this game, I need to go all-out. I need to do my best."

Cristian Pavon scored his first MLS goal to put the Galaxy up 3-1 after just 16 minutes, but Blessing scored two first-half goals for LAFC before Vela connected for his MLS-leading 27th goal. Vela was unwillingly taken off shortly after his goal with a possible hamstring injury, but neither team could conjure a winning goal in the fifth edition of El Trafico .

The Galaxy are 2-0-3 against MLS -leading LAFC, including winning and drawing this season.

"You lead 3-1, I think we should hold the results, but then we were making mistakes that killed ourselves," Ibrahimovic said. "It wasn't them. I mean, they punished us, but when they play their game, and we make mistakes, they punish us. At a higher level, the one that makes the most mistakes is going to pay the most."

LAFC (19-3-5) is cruising toward the MLS 'best regular-season record and the top seed in the playoffs. LAFC has won five straight games since its 3-2 loss last month to the Galaxy (13-11-3), who are fourth in the Western Conference after their first three-game unbeaten run since April.

season series is over, these archrivals could easily meet in a playoff game in October, adding even more spice to an already sizzling rivalry.

Ibrahimovic still craves the big stages he played for nearly two decades in Europe, and this rivalry already has the closest thing to it in MLS. Unsurprisingly, Ibrahimovic has thrived on it since his Galaxy debut in March 2018, when he came on as a substitute and scored two electrifying goals during a three-goal comeback victory at these clubs' inaugural meeting.

Ibrahimovic had a hat trick against LAFC last month, overcoming two goals by Vela in a 3-2 Galaxy victory.

And Ibrahimovic needed about 100 seconds to get on the board against LAFC this time. After he scored with a left-footed strike on a sublime pass from Pavon, the Swedish superstar celebrated with his arms outstretched defiantly in front of LAFC's vociferous North End supporters. Blessing evened it with a rebound header 10 minutes later, but Ibrahimovic added his 22nd goal in 22 games and blew kisses to the LAFC fans.

Pavon made it 3-1 less than a minute afterward with the rising Argentine star's first goal for his new club, but LAFC rallied. Blessing slipped in to score again shortly before half-time, and Vela tied it with a superb piece of skill in the 53rd minute.

Vela's 27 goals are as many as FC Cincinnati's entire roster has scored this season, but the LAFC captain apparently strained his hamstring moments before coach Bob Bradley pulled him in the 61st minute. Vela threw his captain's armband on the ground in disappointment after he was replaced by Brian Rodríguez, a 19-year-old Uruguayan prospect making his MLS debut.

Both teams played more cautiously in the final minutes. Ibrahimovic almost got another hat trick in injury time, but his wicked turnaround shot from outside the box went just outside the post.