Layers of tragedy, in the cemetery and in the mountains 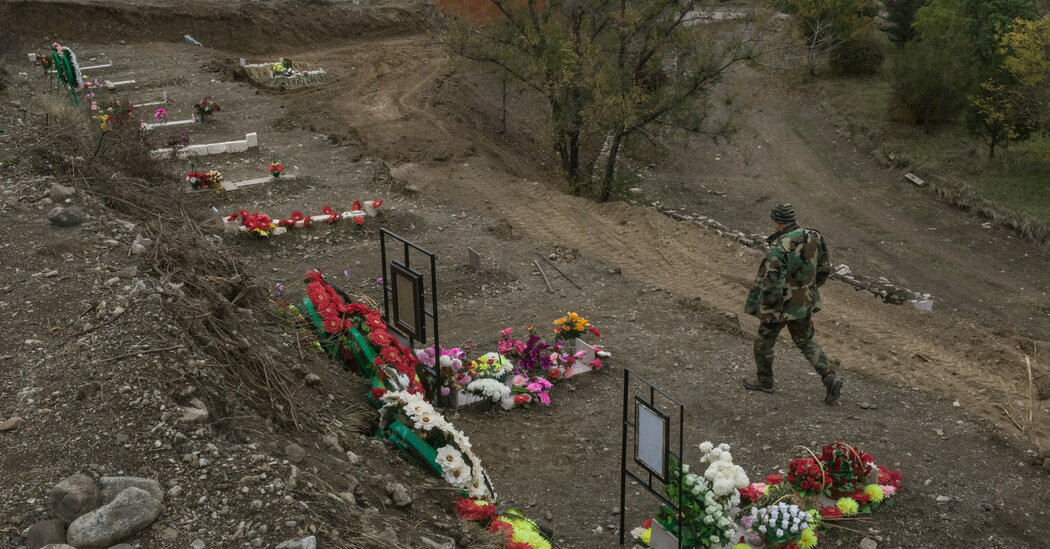 KELBAJAR, Azerbaijan – The little things stay with you.

Men removing the engine from an illegal car on the side of the road. The passing truck was filled with red upholstered furniture worth a living room. The rosy faces of the Russian peacekeepers, leaning forward from the hatches of their armored personnel carriers, buzz down into a deserted, misty valley.

Maybe focusing on the little things is the way the mind works when faced with a tragedy.

This is Kelbajar, the scene last week of the latest generational rift in the Armenian-Azerbaijani conflict.

The mountainous region is part of the breakaway Nagorno-Karabakh enclave, which is legally part of Azerbaijan but inhabited almost exclusively by ethnic Armenians. Armenian troops captured Kelbajar in 1993, expelling thousands of Azerbaijanis who were forced to flee on foot through a cool mountain pass; last week, after thousands were killed in a six-week Azerbaijani offensive to retake Nagorno-Karabakh, Armenians fled what they considered their historic lands, many of them burning their homes on the way out.

Around you here is the ghost of death: the whisper of the bodies of Armenians still scattered on the roads to the south, and the empty eyes of the soldiers when they talk about the armed drones of Azerbaijan. There are also the remains of an Soviet-era Azerbaijani cemetery, a piece of tombstone engraved with minarets, abandoned in the yellow grass.

I returned to Nagorno-Karabakh last week with photographer Mauricio Lima to document the immediate aftermath of the most vicious war of this century in the long-standing unstable Caucasus Mountains. With Russia to the north, Turkey and Iran to the south, the energy-rich Caspian Sea to the east and the strategically key Black Sea to the west, the Caucasus seems destined to suffer as regional powers compete for influence.

And it feels as if the violence is endless. The killings of Armenians by Azerbaijanis in the early 20th century; the “tit for thief” violence of the late 1980s, which escalated into riots, pogroms, war and the forcible expulsion of more than half a million Azerbaijanis from Armenia from the former Nagorno-Karabakh enclave. And now, a six-week war that ended last week after the deaths of more than 2,000 Armenians and an unknown number of Azerbaijanis.

As we headed for Nagorno-Karabakh last Friday, we passed a column of Russian forces in an absurd scene. Our bus, sandwiched between a few cows along the road along the graceful, blue, mountainous Sevan Lake on the left, and Russian armored personnel carriers, with backpacks, cases, and cardboard boxes marked softly, piled randomly on these mechanized killing machines, held in place by green network.

It turned out that we were all heading to the same place – the Dadivank Monastery, a centuries-old Armenian sanctuary whose fate now affects Armenians and historians around the world. It is part of the Kelbajar region, which was to be handed over to Azerbaijani control on Sunday as part of a peace deal brokered by Russian President Vladimir Putin last week, which was later postponed until November 25th.

The Russians set up an observation post near the monastery, where Armenians had gathered to say goodbye and baptize their babies. While I was talking to the abbot of the monastery, Hovhannes Hovhannisyan, the guard house of the monastery below caught fire. The monastery’s longtime guard had set him on fire, although the abbot had asked him not to.

To explain the man’s thinking, Abbot Hovhannisyan called for the 1915 Armenian genocide.

“People have always thought that way,” the abbot said, referring to Armenians as high lumps of flame tore from the roof of the house below and thick yellowish smoke enveloped the monastery. “It’s better to burn down the house he built so you don’t let it be desecrated.”

We continued deeper in Nagorno-Karabakh. After passing more burning, smoldering and charred houses, we entered areas that will remain under Armenian control. The question is: How many Armenians will return?

In Stepanakert, the capital of the enclave, the streets were deserted. There were craters of ammunition, shrapnel marks on the walls of buildings, burnt shops, broken glass, broken windows, broken soft drink cooler doors. There was no hot water or heating, and the only mobile internet service was Azerbaijani, coming from the land the Armenians had just lost.

One of the few people on the street was Mayor Danielyan, 58. He invited me to his house to look in the direction of the historic town on top of Shusha Hill, six miles away – now controlled by Azerbaijan. Now Russian peacekeepers – almost 2,000 of them – had to be deployed along the line with impressive checkpoints and heavy armor – to keep Armenians and Azerbaijanis at bay.

“For now, unfortunately, we have to live separately to exist,” Mr Danielyan said. “One can only hope and dream of living together.”

We stopped at the military cemetery. I was there a month earlier, in the third week of the war, and I found the slope scraped for the recent dead. There were now about 60 new graves, with holes already dug for more, through three rows of stairs, bulldozed into the hill.

I stood below, at eye level with the barren clay and tree roots protruding from it. I knew it contained the remains of men who had been alive only weeks before.

I looked up, saw rows of fresh graves, bright artificial roses and chrysanthemums, framed photographs of soldiers, a nailed wooden cross scratched with the surname Beklaryan, in black marker. Looking up, I saw the mess of tombstones from the war in the 1990s, the resemblance of strict Armenian fighters in uniform, and horizontal-striped undershirts.

And looking higher and higher, I saw an orange stele marking the people of Nagorno-Karabakh who died during World War II.

I thought that layers of tragedy formed these sharp mountains and hills.

And then it was time to go. It was 13:00 on Saturday, and at midnight the only open road outside Nagorno-Karabakh was to come under Azerbaijani control. We were told that the soldiers had diverted us to a side road through the mountains, clogged with traffic for six miles. For hours stuck in the city of Kelbajar, we could barely move, surrounded by fleeing Armenians. The truck behind us seemed to be carrying an entire house intact.

As night falls, the scene becomes more and more apocalyptic. The houses around us caught fire and columns of white smoke rose into the dark sky. At one point, a scandal broke out and with almost no cell phone service, no one knew where to go.

Eventually we turned around and walked along the main road, passing through broken power lines. But before we could, a man got out of the truck in front, lit a cigarette, and unleashed a monumental tirade of swear words.

The man Arsen Nalbanzyan told me that in the area of ​​Armenia where he lives, 31 of the 36 villages were Azerbaijani in Soviet times. “We lived normally,” he said of Azerbaijanis and Armenians, describing shared weddings as godparents to the children of others. Even in recent years, he said he would get drunk with Azerbaijani friends in Moscow and St. Petersburg.

The country’s elite, he said, incite hatred among the people for their own ends.

“It was all done for money, for money,” Mr Nalbanzyan said, his face illuminated by the car’s headlights and the air around us thick with smoke from burning houses on a cool night. “They didn’t think about people – people like us.”