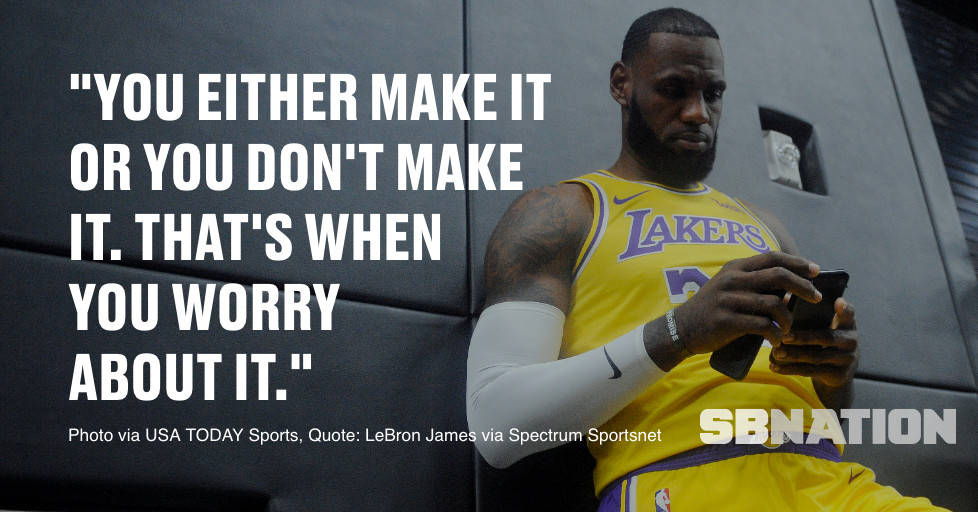 Following their latest nominee for "most-disappointing loss of the season," the Los Angeles Lakers found themselves looking for leadership. Someone to rally around and maybe change the direction this season is heading. In stepped LeBron James.

When asked about when he is starting to get nervous about missing the playoffs, he offered the kind of response you want to hear from the leader in the locker room and savior of a franchise that has not won a playoff game since he won his first title (via Spectrum SportsNet):

"You either make it or you do not make it. That's when you worry about it. "

Well, surely not all of the postgame scrum was that bad, right?

At least when James was asked if maybe the team might have lost focus as the trade deadline neared, he gave a definitive answer that would reassure everyone:

Alright well, at least, he had to have an inspiring message as the team gets ready for a long break from each other, right? Something everyone can really wrap their heads around to come back after the All-Star Break is ready to go:

"You've got to decompress and get away from the game … Get fresh, get your mind right, get your body right and come back with the right mindset to make the playoffs. "

Okay at least that was closer.

Honestly, given the type of effort he gave for most of the Tuesday night's loss to Atlanta Hawks, it was pretty fitting that he half-assed the postgame scrum other than that final quote. myself and others covering the team included) desperately needs the next week or so off. The Lakers are limping into the weekend and they have to be ready to hit the sprint button as soon as they get back, as they find themselves two and a half games of a couple of hungry teams hoping to keep them out of the postseason.

Now, whether the locker room they all come back to looks like the one heading to that break is another thing altogether, but LeBron's comments do serve a purpose: They highlight how the taxing of the last few weeks have been with everything seeming to come it's breaking point Tuesday night in Atlanta.

For now, the Lakers will just have to rally around the team president who said the media is babying them and a superstar who will not worry about missing the playoffs until it's apparently too late. Spotify Stitcher