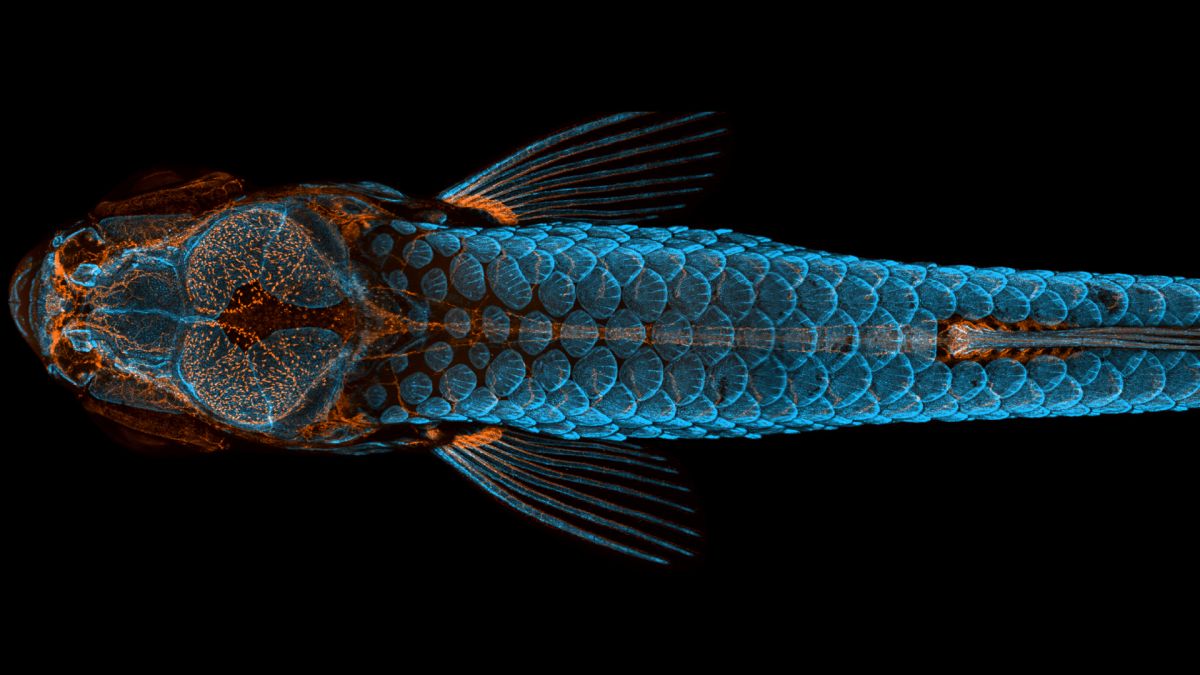 A vibrant, blue-orange photo highlighting the small vessels in and around a young zebra’s brain won first place in A small world of Nikon photo contest, an annual competition showing photos of our world on a microscopic level, Nikon representatives announced today (October 13).

In this image of jaw dropping, the lymph vessels in the fish’s brain glow orange, as do the branching veins that extend throughout the body in a complex network of lymphatic systemwhich frees the body from waste. The compensating delicate orange threads are glowing blue patterns – the scales and bones of the fish.

Daniel Kastranova, Brant Weinstein and Bakari Samasa, researchers at the National Institutes of Health (NIH), took the award with confocal microscopy, an optical imaging technique. Kastranova sewed more than 350 images to achieve the end result, which contestants described as “stunning”

In the zebra, lymph vessels and bones express fluorescent proteins in different parts of the spectrum. The researchers then colored the highlighted areas in the images to distinguish the different proteins, Kastranova told Live Science.

To depict live zebrafish, Kastranova and colleagues anesthetized the animal and placed it in a flexible gel called agarose to keep the fish still for the photos, covering the zebra with water so it could breathe.

“We can depict them and then peel them off the agarose and revive them,” Kastranova said. Researchers have photographed this particular zebrafish during several stages of its growth, creating a timeline that shows where the lymph vessels in the brain come from and how they develop.

Lymph vessels were first discovered in the mammalian brain in 2015 and they can help the brain expel toxins, according to the NIH. This image of a zebra is part of an investigation that for the first time demonstrates that fish also have these vessels in their brains, he explained.

Second place went to the composite image showing the development of the embryo in a clownfish (Amphiprion percussion), in a sequence taken over four days by nature photographer Daniel Knopp. The first egg in the leftmost part is freshly fertilized, while the egg at the end of the line on the right is only hours from hatching, according to the competition statement. The third-place winner, a highly colorful close-up in freshwater snail language, was captured by Igor Sivanovic, a biochemist and neurobiologist at the Max Planck Institute in Munich, Germany.

For 46 years, the Nikon competition has featured photographers and scientists who use microscopes and camera lenses to capture minor wonders. Includes remarkable images from previous years rainbow-colored turtle embryo; clusters of shiny, sequin-like scales around eye of a beetle; and luminous embryonic fish faceto name just a few.

This year, winners were selected from more than 2,000 entries, representing researchers and microscopy artists from 90 countries around the world. Judges evaluate the statements based on their artistic vision, originality, technical expertise and scientific context, according to the statement.

“First of all, the image has to be striking – it has to be aesthetically interesting or pleasing,” said competition judge Dylan Burnett, an assistant professor in the Department of Cell and Biology Development at Vanderbilt University School of Medicine in Nashville, Tennessee.

“An interesting scientific angle is also needed to push the image to the top 20,” Burnett told Live Science. The clarity and beauty of Kastranova’s image – as well as its scientific significance – immediately caught the judges’ attention, Burnett said.

“This was the only image that each of the judges agreed to,” he said. “His position in the first place was almost clear almost immediately.”

You can see all the award-winning photos and honorable mentions of Nikon Small World Contest Website.

Scientists peek into an asteroid – is Benu in the process of spinning to pieces?