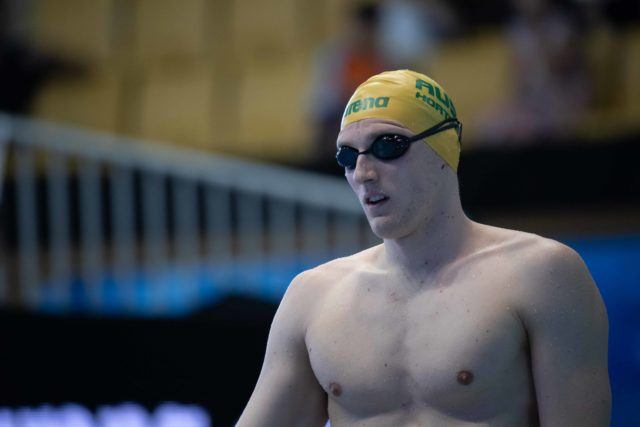 The first podium ceremony at the World Championship in FINA 2019 came with a heavy dose of drama. in Gwangju, protested a gold medalist the presence of Sun Yang by refraining from celebrating the podium standing behind the floor platform during the Chinese national anthem. # FINAwangju2019 #FINAWorlds # Gwanju2019 pic.twitter.com/fabgXk7bpX

The time of the hammer with Mack Horton refuses to stand on Podium to Sun Young ] Horton also preserved a deliberate distance between himself, the Sun and the Bronze Medalist Gabrielle Childs during the post-podium photos in addition to his demonstration at the awards ceremony:

The picture tells everything pic.twitt July 21, 2019

Horton, the 23-year-old, has long had some rivalry with the three-time Olympic champion Sun who, he is involved. in the doping investigation.

Returning and returning back to the Olympics in Rio in 2016. As they competed there, Sun had cast Horton while in the warming pool, and Horton told the media He slapped me to I say hello, and I ignored it because I do not have time to cheat drugs. "

At that time Sun replied with accusations that Horton played in mind to destabilize him. "I do not think I have to explain it any further. I did what I needed to prove I was pure … all athletes should show respect. At the competition stage, every athlete deserves to be respected and does not need to use these types of cheap tricks to influence each other.

Now, Sun is facing a CAS hearing in September on the World Anti-Doping Agency's appeal against FINA's decision not to punish the world recorder in the blood-spreading incident in the vial in September. The sun and Horton were arranged to warm up next to each other in trails 3 and 4 in the training pool before Sun Aussie Coach Denis Kotrel to move the Chinese swimmer into band 5, according to China Morning Post

"I just will not share a podium with someone who behaves just as he does," Horton said after the Sunday race. He asked Detti to do the same, but the Italian said something like: "I worked too hard for bronze, I want the podium."