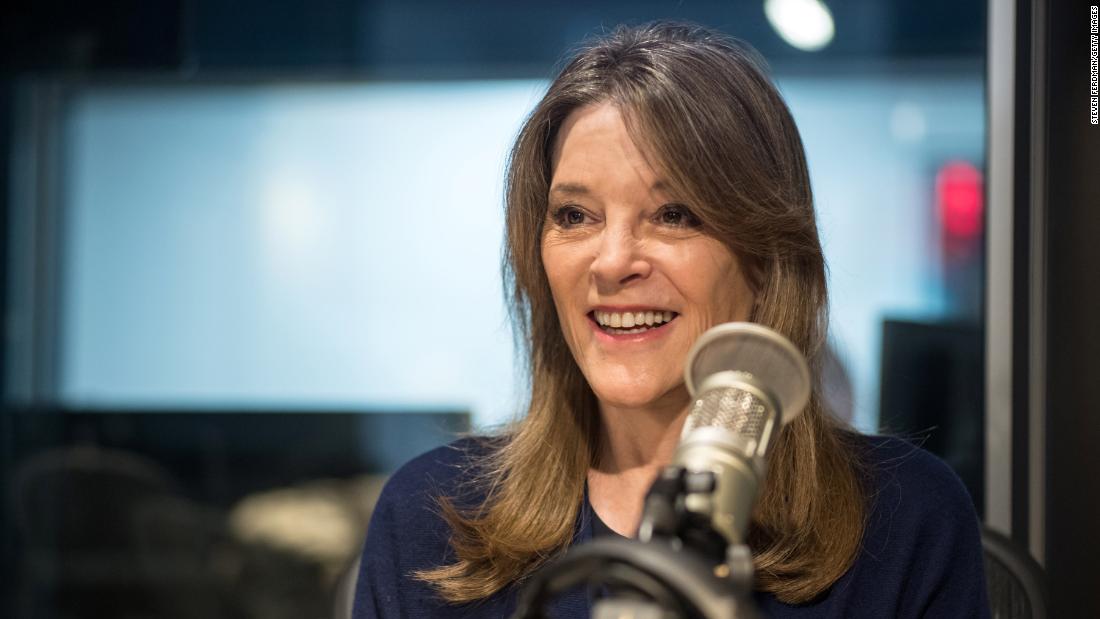 In the 2012 appearance, Williamson declined to challenge the host's conspiracy theory and said that questioning the actual history of September 11, 2001, attacks was acceptable and no different than questioning the government account of President John F. Kennedy's assassination . The interview was first shared on Twitter in early August but has not been widely circulated or reported on.

1 truthers, Williamson campaign manager Patricia Ewing told CNN that "over the course of her 35-year career as an author, activist and speaker, Williamson has been interviewed hundreds and hundreds of times by media outlets that run the gamut." Ewing said the appearances were "not the endorsement of the hosts philosophy or ideas," adding "she's talking about her ideas, not theirs."
Williamson was a guest on Truth Jihad, and a radio show hosted by conspiracy theorist Kevin Barrett. Barrett has peddled claims that Israelis were involved in orchestrating 9/11 and that Kennedy and Texas Gov. John Connally could not have been shot by the same bullet, as a US government commission concluded. Barrett has said in interviews on Iranian government-funded television that 9/11 was an "inside job," a "Zionist coup d'état," and "another Hollywood movie."

"I don't know if you knew it, but I was chased out of the academy back in 2006 for talking about, uh, the questions surrounding what really happened on September 11, 2001, "Barrett told Williamson on the show.

"I've lost two jobs, one tenure track job at the University of Wisconsin and I'm unemployed at the American academy right now. So, if we have a fascist country – if that means that you can't even come close to telling the truth about the most important event of the century and still have a job as a professor, or at least you're risking your job – then we're pretty fascist, "Barrett said, waiting

"Yeah, I couldn't agree with you more," Williamson, who is Jewish, responded. "And I think listen, to have questions about 9/11, to me, is no different than having questions about the Warren Commission. And I don't believe in the single bullet theory of Kennedy assassination either."

Ewing , Williamson's campaign manager, pointed to another section of the interview where Barrett criticized American democracy saying that in comparison Iran "actually looks pretty good." Williamson pushed back calling his comments "radically against the US government" saying that while disagreed with him on some points she celebrated "the freedoms" Americans have to speak their minds.

Later in the show, Barrett asserted that a "Zionist organized crime outfit "were manipulating the Republican Party. Williamson failed to challenge Barrett's views on the orchestration of 9/11, but later offered some push back against Barrett's "worldview" saying she did not want to see Israel "obliterated."

"I think the Republicans are in the hands of Zionist organized crime outfit that has been dedicated to going to war with Iran ever since they blew up the Trade Towers, "Barrett said.

Williamson responded:" So you think the Zionist organized crime unit were the ones who did 9/11? "

Barrett responded by mentioning Larry Silverstein, the developer of the Ground Zero Site in Manhattan, who is also Jewish.

"So wait, I need to ask. So I understand the theory of 9/11 being an artificially created Pearl Harbor in order to justify an Iraq War," Williamson interjected before being cut off by Barrett, who corrected her and said that 9/11 "was about destroying the enemies of Israel."

Barrett's theories that falsely posit a conspiracy involving Israeli complacency in the 9/11 attacks have deeply anti-Semitic roots. Blaming Israel or Jews for manipulating world events, such as the Anti-Defamation League argues, is a manifestation of an age-old trope that Jewish people plot actions in order to gain or maintain power.

Williamson has not used her presidential platform to push these discredited and highly inflammatory theories. But a KFile review of her past appearances has provided a window into past associations with conspiracy theorists. A previous KFile investigation in August found that Williamson's radio show once provided a platform for unfounded theory that vaccines are linked to autism.

In several instances, Williamson has appeared, promoted and featured at conferences, podcasts and radio shows that gave a platform to 9/11 "truthers" who claim a secret plot behind the World Trade Center attacks. Between 2014 and 2016, Williamson appeared on the shows of Sean Stone, Gary Null and John Shuck. All three have individually pursued and promoted conspiracy theories surrounding 9/11 on their programs, though Williamson did not discuss any theories surrounding the World Trade Center attacks during her appearances, according to a review conducted by CNN's KFile.

In 2014, Williamson also appeared at a conference that actively promoted the WTC7 theory which is a prominent conspiracy that a third building at Ground Zero in Lower Manhattan was part of a controlled demolition project orchestrated by the US government. The conference was hosted by the Free and Equal Elections Foundation, which has pushed 9/11 conspiracies on social media and interviewed 9/11 truthers on its podcast.