Maria's fire in Ventura County erupts up to 7,400 acres, threatening Somis and Satiko 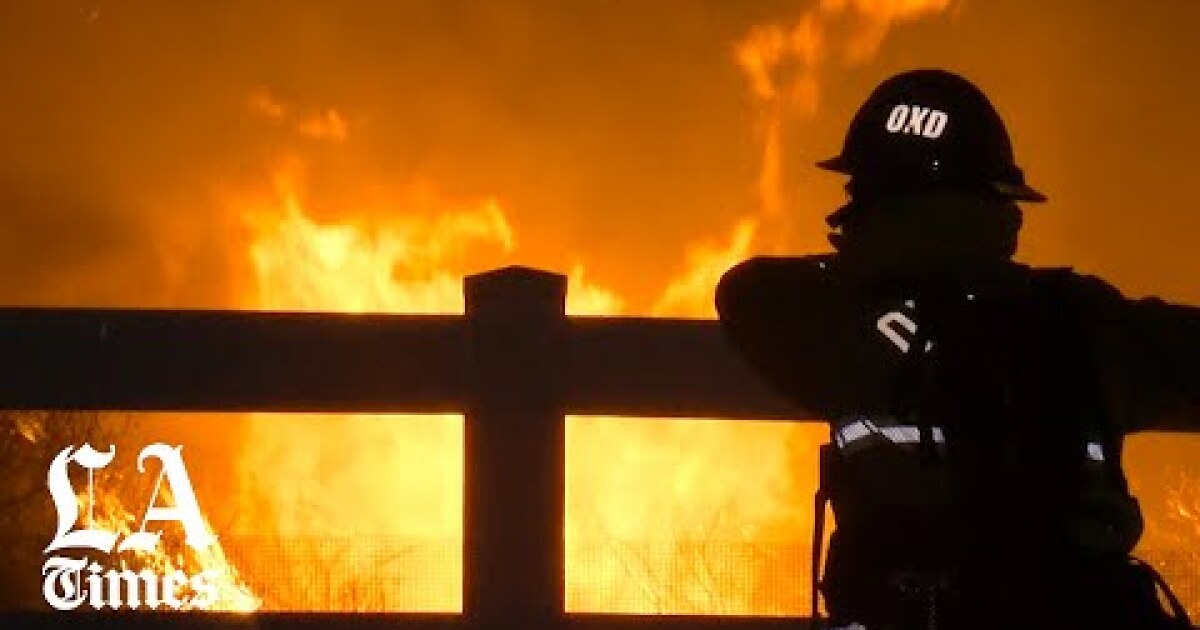 The flame, which was called Maria's Fire, exploded on the summit of the Southern Mountains, south of Santa Paula, moving toward the small agricultural towns of Somis and Satiko. At least two structures were lost and 1800 were threatened.

Authorities have issued mandatory evacuations for a series of homes bordering South Mountain Road to the north, Highway 118 to the south, Los Angeles Avenue to the west and Balcom Canyon Road to the east. At nightfall, firefighters are trying to put out fires in the area and keep flames from spreading north to Santa Paula and south to Somis.

Evacuation orders cover about 7,500 people, according to the fire department.

Aerial video footage shows that at least one home is burning along the south flank of the fire, near La Loma Avenue and Central Road.

About 400 firefighters fight the fire, with helicopters launching water on the flames while ground crews try not to spread it to homes.

Because the flames exploded high on the ridge, it gave authorities time to evacuate before the flames moved down the mountain and into residential areas, said Ventura Fire Chief John McNeill. But the remote location also hinders access to fire trucks, he said.

"I want to assure you that this is not the Thomas fire," he said, referring to the large-scale fire in 2017. McNeill said that the location of the fire in Mary means that he will probably have fuel left for burn after reaching a more manicured landscape at the bottom of the hill.

At one point, the efforts of aerial firefighting were hampered by a small drone that was operated over the fire, apparently by someone who wanted to shoot the flames, Ventura County Sheriff Bill Aib said. Air operations resumed around 11:00 pm

By midnight, winds were still blowing from the northeast to southwest, with sensors recording winds of about 20 to 30 mph, said David Gomberg, a meteorologist at the Oxford Office of the National Weather Service The big problem was the constant dry air – the relative humidity in the area of ​​the fire was dry to the bone 5%.

There was a silver lining – the fire broke out as the wind eased; if this area were lit just 24 hours earlier, "we would be talking about winds of 50 mph to 60 mph, and it's a whole different balp park," Gomberg says.

The Times is offering a fire for free today. Please consider a subscription to support our journalism.

The northeast Santa Ana winds are expected to remain constant until Friday morning and probably into the next afternoon. Around 3pm, forecasters expect Pacific Ocean winds to appear for the first time since Tuesday.

Santa Paula sits in the Santa Clara River Valley, among the most dangerous wind and fire corridors in Southern California. The river valley forms a wind-like tunnel corridor that essentially connects the high desert and the Santa Clarita Valley with the Oxnard Plain on the Ventura County coast between Oxnard and Ojai. The topography carries the potential for the funneling of heavy winds from Santa Ana.

Towards the east of this corridor, the recent fire in Sadleridge was the third flame near Silmar in 11 years. Previously, Sierre's fire burned 11,000 acres in November 2008 and the monthly Creek fire burned 15,000 acres in December 2017. That same month, the huge Thomas fire in the western end of the Santa Clara River Valley burned 280,000 acres in Ventura and Santa Barbara County.

The fire in Maria exploded as crews continue to inflict multiple fires in southern California, including fires in San Bernardino and the Jurupa Valley, which together burn hundreds of acres and prompt thousands of residents to flee their homes.

The critical fire time is expected to remain in effect for the brightest areas of Ventura and Los Angeles counties at least Friday afternoon, continuing the red flag conditions for an additional 24 hours. Unless canceled early, this will result in this period of critical fire time, which began Tuesday at 11 a.m. for at least 67 hours. It is an unusually long time for such a red flag warning; the last one or two days.

The red flag warning, which gives an alarm in high winds, dry air and dried vegetation, is expected to remain in the mountains in the cities of Los Angeles and Ventura, the valleys of Ventura County and the Santa Clarita Valley at least Friday night. due to the continuous northeast winds and very dry air.

The critical time for fire is likely to continue until Saturday.

Santa Ana winds are expected to weaken with each passing day, and Gomberg said forecasts predict the fire risk will decrease significantly by Sunday. "If we lose the wind by Sunday or Monday, we will definitely be in a better situation," Gomberg says.

The cause of this high wind event in Santa Ana was a particularly powerful mass of cold high pressure air that sits above the Rocky Mountains and the Great Basin over Nevada and Utah, causing record lows during that time of year there.

This significant temperature difference with the West Bank has created a particularly large difference in air pressure, which sends fast and dry winds over mountains and through canyons to the low pressure gaps on the California coast

But when the Rockies and Great Pool temperatures begin to widen, the slimming gap between inland air pressure and the coast of California is expected to allow the normal Pacific Ocean breeze to return to California's southern shore Friday, Gomberg said.

Wind gusts recorded Thursday were still strong – 67 mph in Ventu ra coastal valley in the county, the National Weather Service reported, compared to a peak recorded Wednesday from 78 mph at Boney Peak in Santa Monica Mountain. The air is still dry to the bone, with relative humidity levels in the Simi Valley, the site of a fire that threatens Reagan Library on Thursday at 8%.

gusts of up to 54 mph were registered near the Cajon Pass, near where the San Bernardino Hill Fire spread Thursday morning. Riverside Municipal Airport, near a fire in the Yurupa Valley, recorded gusts of 25 mph, said Jimmy Tager, a meteorologist with the National Weather Service in San Diego.

Writers from the team of Paul Duginski and Robert Gauthier contributed to this report.