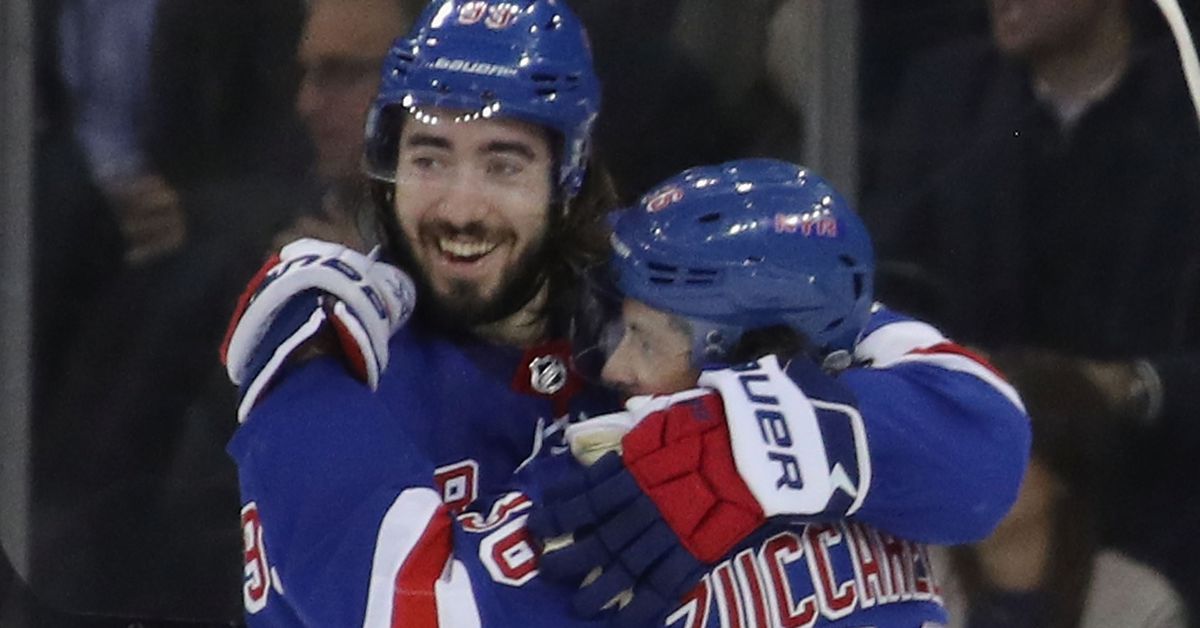 Knowing that something difficult comes does not make it easier. As fans were prepared for the eventual departure of Mats Zuccarello – now steady as he goes to Dallas – it was not easier when the news fell. And when the emotional fans saw the first announcement of the scarce return, it became even worse.

Jeff Gorton acquired a conditional selection of the 2nd round in 2019 and a conditional selection of the 3rd round in 2020. If Dallas Stars won two rounds in the playoffs (and Zuccarello played 50% or more of the games), the second 2019 becomes 2019 1st. If Zuccarello loves Dallas and stays around this summer, then the third round of 2020 will become honorable in 2020.

The deal itself is extremely impressive at its core. Zuccarello has 65 points (if he has played in all 82 games), he is a multiplayer with 50 points and is one of the most skilled rangers we have ever seen for the team recently. Add the fact that Zuccarello is a favorite fan, may be the human incarnation of the Steven McDonald Extra Effort Award, and is the funniest thing that is usually not made, it's hard to see. The return took the knives for Gorton, who must say, stand up against the wall, waiting two weeks ago to sit down and negotiate with Zukarello. I'm not saying things would change in a different way if the two sides spoke for a whole year, but if Zuccarello's request had been reduced to three years (and not the five for which Larry Brooks reported his camp was demanding) we've seen Gorth. willing to keep the Norwegian.

I saw a lot of "Rangers" nothing "about Jukarello. is true, all of them were mentally prepared for Zuccarello to bring back the second round and B-level, and we hope the total package will be bigger, I hope a team will bid in after losing other options and increasing his bets ̵

1; but with the reduced reality the prospect of second and second level was the reasonable expectation of rent here. they got 2nd place and could not get a different perspective, so they took the third round, with conditions that will come for a moment

Back to the "nothing" aspect: The second round is nothing. The problem is to take a legitimate drop in NHLer as each name goes out of the board but there are many players who float their trade (or even dominate) in NHLs in their respective circles, say "Oh, Rangers, get suck in the preparation, "is not a fair part of this analysis. Do you want to blame the team for the lack of high-end project results over the last decade or more? Okay, but it has nothing to do with the return . Rangers will have three choices in the second round this year (or two or one, depending on whether Tampa won the Cup or Dallas wins two rounds or both) to help the farmer who still needs an elite talent. It is not uncommon to find these players in the second round of the project, and Rangers have more shots today than yesterday.

Jeff Gorth and the "best deal there"

Gorton can not just materialize the trading partners. In addition to Darren Dreger's report of the day before, that the Rangers could have a first or a high perspective, almost everyone was second and second. If this. Do you remember a month ago when the conversation was that Zuccarello could not even get it back?

People who scream on Twitter and Facebook that Gorton "escaped" seem to forget that he can not create magical trading partners. At this time of the year (read again: on this time of the year), the income from trade is largely dictated by the market. That's why I gave Gorton so much credit for Michael Grabner's trade last year – he got his deal before the market started falling. I'll get to Gorton's mistakes about this deal later on in the article, but the idea that Gorton has looked at other offers and said "no, I accept that" is absurd. He took the best deal in front of him, and since the talks with several teams last for weeks, it was a trade after a massive market review. The idea that Gorton could "negotiate" for better returns than another team is also wrong. Or the action is there or not.

In a traditional environment (say, in a project or occasional trade in the middle of the season), it's easier to paint with black and white traits on a deal because there are no such drastic factors to play. Once you enter the "selling" part of the season, you are a victim of the market itself (to a certain extent). If there was even one more team who wanted to give Gorton a guaranteed first round, it's hard to imagine Zukarello could not end.

The idea that Gorton "had to wait longer" is just as misguided. The longer these negotiations are withdrawn, the greater the influence of the buyers. Thanks to Ranger's terrible Rangers timeline for "talks" with Zuccarello and Kevin Hayes, it was known that the team planned to move them by February 25 at all costs. If Gorton turned this offer and Dallas or made an offer for Mark Stone or find another wing or decided to do nothing and just move, you could bet that the deal on Monday would be worse than that. Is it possible for another team to panic and give up more? Of course, but that's even more risky than not taking the deal that was on the table at the moment. Gorton's job is to feel the market and move, and he thought this was the best deal he would get.

Ryan Jingle's return (Anthony Duclair and two rounds of round 2) raised his eyebrows, especially as he dropped shortly before being moved to Zuccarello. Keep in mind: Dzingle is four years younger than Zuccarello and is probably seen as someone who has another gear since playing in the Ottawa pit. Probably Columbus did not want to send pictures and prospects (if NYR even asked Duclair back) to a rival for division. Again: It's not black and white.

There is a huge risk for this trade for Gorton, and that's probably the reason he went with this deal for others that were proposed (Calgary, Winnipeg and Nashville and Zuccarello, although we do not know who the company has proposed). If any of these conditions are affected, the deal becomes a host. If both conditions are met? It's a big helmet. If none of them are fulfilled, then Gorton will have at least one more stroke to bring Jukarello back in July.

The West is a crazy conference at the moment, with Dallas sits in the first place in the Wild Card with 65 points. They are six points behind the red-hot blues for the last place in the top-third central. Zuccarello will add a lot of talent to this group in Dallas, especially after he is finally surrounded by elite talents. Although I did not expect Dallas to win two sets of playoffs with a gun in my head, it's not quite impossible. If the playoffs started right now, they would be on their way to Winnipeg, and then they had to go through Nashville or St. Louis to meet the conditions. They became crazier things and I'm curious to see Zuccarello's skill in this line-up.

As for him, it's kind of like a double chance for Gorton. If Zuccarello signs up again in Dallas – it's as likely or unlikely as you can believe it is – Rangers get hat 2020 1st and it's over and done. If Zuccarello does not stay in Dallas, then he will hit the free agency market, and Gorton will be able to get him back.

This deal may be only second and third with Zuccarello, carrying another jersey next year. It may well be 1st and 3rd, or 1st and 2nd, or 1st and 3rd, as Zuccarello returns to New York. It would not be crazy Dallas to fall in love with Zuccarello the same way New York did and do everything in his power to keep him around. There is a lot of stuff in this trade, and although it represents a huge risk, there is also upwards on this issue.

This really is the time of everything.

The most logical complaints from the deal I saw were "Rangers had to keep it if it was the best offer at the table," which I do not think is a crazy thought process. The problem is I'm not sure it's possible after so hard that Gorth and the company are messing up their time.

At the beginning of the year Zuccarello was so sure he would be traded that he had influenced his everyday life and his ice-making. The Rangers did not negotiate with him or Hayes two weeks ago – so they could not even pretend that trade was not the only result. There were numerous reports from the national chapters that both would be distributed throughout the year – and that was a natural assumption – but the local reports, which neither party had spoken a few weeks ago, were telling. Gorton should not let things go so long and at least have to touch the base all season. Zuccarello's five-year querum is not absurd, especially since he completes his four-year extension in which he has certainly left money at the table and knows that this is probably his last big contract in his career. Gorth relinquishes the five-year question, but if these talks happened in November, it would be time to see if he had a middle position. Gorton could always have been clear that he was doing this in addition to a review of trading opportunities, and perhaps Zukarello and his camp would have met in the middle to stay and force Gorton's hand.

At the very least, he may not have created any bad blood that seems to exist now. Based on some reading among the lines of the media in the hall, Zuccarello seems to have gone forever. Two months ago, I would not have thought this was the case – sending and returning it in July have always worked on paper – but that does not seem so likely now. Perhaps it is for the cameras (Gorton and Zukaarelo, who are discussing such things would be a secret agreement), but for now is the truth. I do not think Gorton could turn and sign it for a penny less than his initial inquiry as soon as we get to that point, and that was something Gorton did not want to do.

Not much more to say here. I believe Tom will have a light story we'll need next week. Meanwhile, here's the thread to make you feel better:

Okay, I want all your pictures of dogs in the Rangers' gear. We will use the thread to get through the upcoming Zuccarello Trade. I will start pic.twitter.com/ljUlEmuaBI