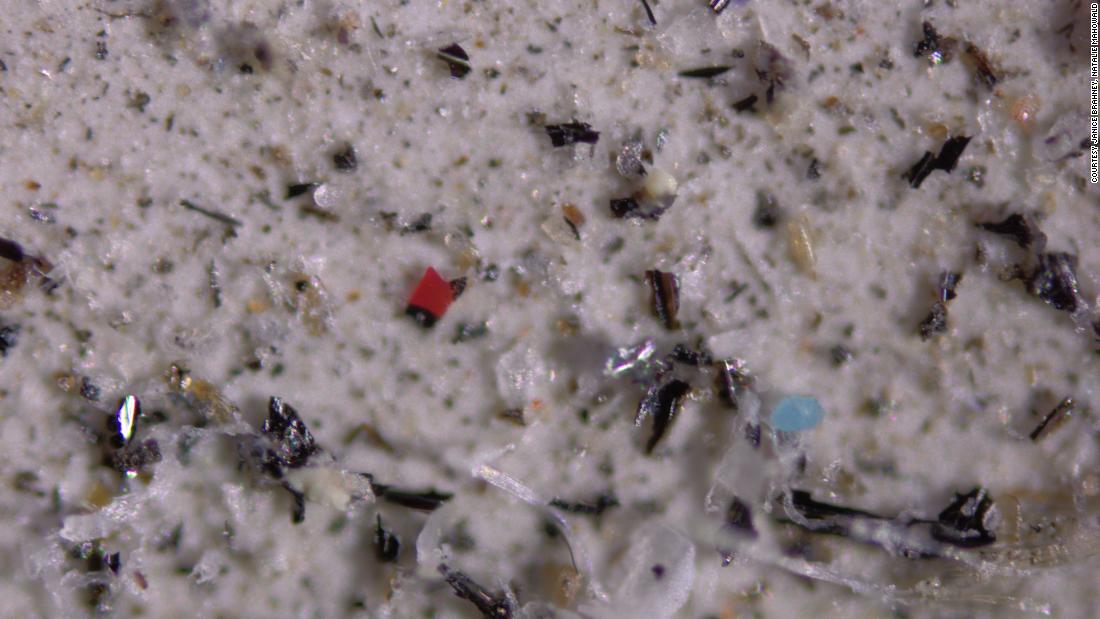 Most of our plastic waste is disposed of in landfills, incinerated or recycled – but up to 18% goes into the environment. Because plastic is not readily degradable, it is instead fragmented into smaller pieces until the microplastic becomes small enough to be carried into the air.

“Linked to global biogeochemical cycles, plastics are now circulating around the world,” said the study, led by researchers at Utah State University and Cornell University and published in the Proceedings of the National Academy of Sciences.

This means that much of the plastic that is dumped into the sea and across the land is degraded and dumped back, creating potential risks to our ecosystems. And although some progress has been made in creating biodegradable polymers, researchers have warned that microplastics “will continue to cycle in terrestrial systems.”

;
“We found a lot of hereditary plastic contamination everywhere we looked; it travels into the atmosphere and settles around the world,” lead author Janice Brahni said in a news release from Cornell. “This plastic is not new this year. It’s from what we’ve been throwing into the environment for decades.”

The research team collected data on atmospheric microplastics from the western states from 2017 to 2019 and found that about 22,000 tons of microplastics are deposited in the United States each year.

In the United States, the main way plastics are thrown into the air is road traffic. Car tires, brakes and even road surfaces contain plastic that can wear out into microplastics that enter the atmosphere. The turbulence of cars on the road – the movement of tires, the braking process, the exhaust gases they emit – help to throw the plastic to the ground and send it to the sky, according to the study.

This also happens in the ocean, where large clusters of waste form entire plastic islands. They decompose into plastic particles that sit on the top layer of water, where they are released into the air by waves and wind.

There are several other ways in which microplastics enter the atmosphere, in large cities through wind and in farms through soil dust during agricultural processes.

Once in the atmosphere, plastics can stay in the air for up to six and a half days, according to the study. During this time, “under the right conditions, plastics can be transported across large oceans and between continents, either on a single trip or by resuspending over the oceans,” the study said.

The United States, Europe, the Middle East, India and East Asia are hotspots for the application of terrestrial plastics, the study said. Meanwhile, ocean sources of airborne plastic are more visible along coasts, including the west coast of the United States, the Mediterranean and South Australia. Sources of dust and agriculture for microplastics are more common in North Africa and Eurasia, while road traffic microplastics contribute mainly to “highly populated regions” around the world.

Microplastics are everywhere – they affect soil and plant production, are consumed by flora and fauna and “act as a vector for pollutants,” the study said. Although previous studies have not found that microplastics pose a threat to human health, researchers in this study warn that “they may have negative and as yet unknown effects on ecosystems and human health.”

“Inhalation of particles can irritate lung tissue and lead to serious diseases, but whether plastics are more or less toxic than other aerosols is still unclear,” the study said. He added that further research is needed to understand the impact of various factors, including population density and ocean circulation.

“Our relative ignorance of the consequences, despite rapidly increasing concentrations of plastics in our environment, underscores the importance of improving the management of plastic waste or, in fact, capturing ocean plastics and removing them from the system,” the study said.