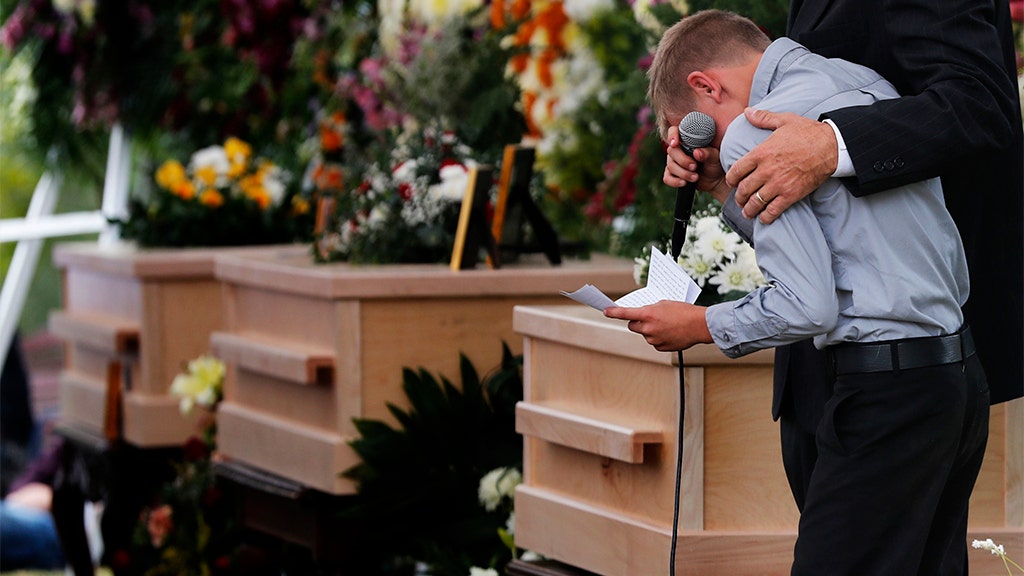 The first funeral for victims of this week's cartel massacre that killed nine American women and children was held Thursday in the remote La Mora farming community in northern Mexico, as a mother and her two sons were laid to rest in a hand-hewn pine coffins in a single grave.

A boy paused next to the coffins of Dawn Ray Langford, 43, and her sons Trevor, 11, and Rogan, 2, who were killed Monday. (AP Photo / Marco Ugarte)

About 500 mourners paid their respects to Dawna Ray Langford, 43, and her two sons, 11-year-old Trevor and 2-year-old Rogan. The trio were riding in a convoy of SUVs when attackers opened fire on a dirt road leading to another settlement, Colonia LeBaron. Six women and three children died in shooting.

Clad in shirt sleeves, suits or modest dresses, mourners embraced in grief under white tents erected in La Mora. Some wept, and some sang hymns. Members of the extended community – many of whom, like the victims, are dual citizens of the U.S. and Mexico – had built the coffins themselves and used shovels to dig the shared graves in La Mora's small cemetery. Farmers and teenage boys carrying coffins.

"The eyes of the world are upon what happened here, and there are saints all over this world whose hearts have been touched," said Jay Ray, Langford's father. "The Plan of God is for His Saints to gather out from among the wicked, become separate from them, to band together to establish together the laws of respect and oneness."

"God will take care of the wicked," he added.

Langford was fond of saying, "There isn't anything in life that a cup of coffee couldn ' t make better, "her sister, 34-year-old Amber Ray, recalled during her eulogy, saying that her sister was a devoted mother to 13 children who loved to laugh and baked the best birthday cakes.

About 300 people live in a small community whose residents consider themselves Mormon but don't affiliate with The Church of Jesus Christ of Latter-day Saints.

Dozens of high-riding pickups and SUVs, many with U.S. license plates from as far away as North Dakota, arrived in La Mora for the funeral, traveling over the dirt road where the attack occurred. Patrols of the Mexican Army troops passed by regularly on the hamlet's only paved road but much of the area is generally without law enforcement. Residents have been taken to providing their own security since the 2009 killing of an anti-crime activist.

Gunmen from the Juarez drug cartel had apparently set up the ambush as part of a turf war with the Sinaloa cartel, and the U.S. Families drove into it.

Mexican officials said the attackers may have mistaken the group's large SUVs for those of a rival gang.

The other victims were expected to be buried in Colonia LeBaron at a later date.

Men long a mass grave for some of the victims who were killed in Monday's Mexican cartel ambush. (AP Photo / Marco Ugarte)

MEXICAN MASSACRE SUSPECT ARRESTED AT BORDER NOT TIED TO ATTACK; CONFUSION OVER WHICH CARTEL WAS RESPONSIBLE

"The country is suffering very much from violence," said William Stubbs, a pecan and alfalfa farmer who serves on a security committee at Colonia LeBaron. “You see it all over. And it ain seems getting better. “Getting worse.”

The Mexican Army Chief of Staff, Gen. Homero Mendoza, said the attack began Monday at 9:40 a.m. The nearest army units were about 100 miles away at the time and the soldiers did not arrive until 6:15 p.m.

Steven Langford, who was mayor of La Mora from 2015 to 2018 and whose sister Christina Langford was one of the women killed, told The Associated Press he expects slayings to lead to an exodus from the community.

"Now this place is going to become a ghost town," he said. "A lot of people are going to leave."

"It was a massacre, 100 percent massacre," the former mayor added. "I don't know how it squares with the conscience of someone to do something so horrible."

Fox News' Dom Calicchio and Stephen Sorace, as well as The Associated Press, contributed to this report. [19659033]
Source link