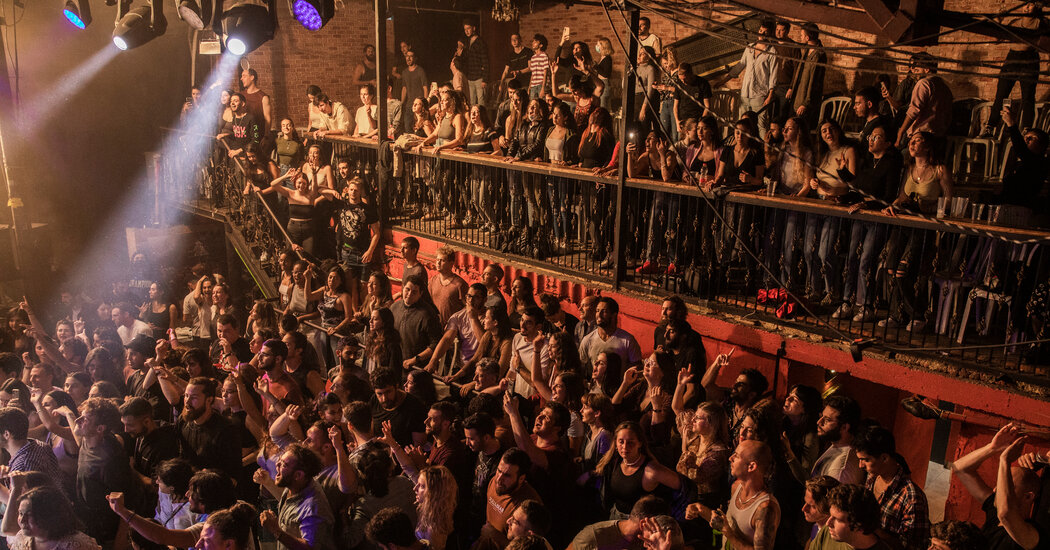 The green pass allows us, the vaccinated, to go to concerts, restaurants and sporting events. But Israel’s real-time experiment after locking up leaves many questions unanswered.

TEL AVIV – As the lights dimmed and the music lit up, a wave of excitement echoed through the crowd. Someone a few rows above me, gorgeous with joy, as if at a Middle Eastern wedding.

I had come to Bloomfield Football Stadium in Tel Aviv for a concert by Dikla, an Israeli singer of Iraqi and Egyptian descent, who was hailed by the city as a celebration of the “return of culture.”

; This was the first live performance I attended in more than a year. There were only 500 vaccinated Israelis in a stadium that usually seats nearly 30,000 people, but it was strange and exciting to be in a crowd of any size after a year of interruption.

The audience was confined to their socially remote places, dancing on the spot and singing under their masks. But the atmosphere was stormy, and that confirmed my status as a member of a new privileged class: fully vaccinated.

We, a group that includes more than half of the nine million people in Israel, have a taste for a post-pandemic future.

Class membership is certified by Green Pass, a document that you can download and carry on your phone. It includes something like a GIF, a slightly moving animation of green people walking around, looking like a happy, fully vaccinated family.

The vaccination program in Israel is remarkably fast and successful.

In recent weeks, new Covid-19 cases have dropped dramatically, from peaking at 10,000 a day in January to several hundred in late March. The economy is almost completely open. Just as Israel has become a real laboratory for the efficacy of the vaccine, it is now becoming a test for society after blockade and vaccination.

Green Pass is your entrance ticket.

Green Pass holders can dine indoors in restaurants, stay in hotels and attend indoor and outdoor cultural, sporting and religious gatherings in the thousands. We can visit gyms, swimming pools and theater. We can get married in wedding halls.

We celebrated the spring holidays of Easter and Easter in the company of family and friends.

Local newspapers and television stations advertise a summer getaway for fully vaccinated people in countries ready to take them, including Greece, Georgia and the Seychelles.

And when you book a table in a restaurant, they ask: Do you have a green card? Have you been vaccinated?

The system is imperfect and, apart from the Green Pass, in many ways the “system” can be an overstatement. The performance is uneven. There are troubling questions for those who have not been vaccinated and noisy debates that are taking place in real time – some sort of landing in court – about the rules and responsibilities of returning to near normalcy.

Furthermore, there is no guarantee that this is indeed the beginning of the future after the pandemic. Any number of factors – delays in vaccine production, the emergence of a new vaccine-resistant variant and the huge number of Israelis who remain unvaccinated – can rip the carpet out.

The New World has also highlighted inequalities and divisions between societies with more or less access to the vaccine.

Friends and colleagues from the West Bank and Gaza have not yet been able to be vaccinated.

The Palestinian vaccination campaign has just begun with doses donated largely by other countries, amid a fierce debate over Israel’s legal and moral obligations to human health in the territory it occupies. Israel has vaccinated about 100,000 Palestinians working in Israel or in West Bank settlements, but has been criticized for not doing more.

More than 5.2 million Israelis have received at least one shot from the Pfizer vaccine. About four million remain unvaccinated, half of them under the age of 16, who do not yet qualify for the vaccine pending regulatory approval and additional testing on children. Hundreds of thousands of citizens who have recovered from Covid have recently been included in Israel’s vaccination program.

And up to a million people have so far chosen not to be vaccinated, despite the enviable supply of vaccine doses in Israel.

Some oppose the filming for ideological reasons, while others say they are worried and expect to see the effect of the vaccine on others. They have generated little public sympathy, and health officials have criticized them for succumbing to what they describe as fake news spread on social media.

The programs present complex moral and legal issues. Should they also have the right to join the world? Is it ethical to discriminate against them? Or is it fair to force those who have done everything possible to protect themselves by getting vaccinated to share space with people who have chosen not to do so?

These questions erupted when another artist, Achinoam Nini, a famous singer and songwriter named Noah, announced a performance only for Green Pass holders in a venerable hall in Tel Aviv.

A small but vocal minority of anti-waxers and others accused her of collaborating with a discriminatory system and supporting medical experiments and coercion.

“You are collaborating with the selection,” wrote one critic, Reut Sorek, borrowing from Holocaust terminology. “You are cooperating with the medical dictatorship and the suppression of personal rights.”

Ms. Nini responded in a passionate Facebook post that vaccination is for the common good, balancing public health against personal freedom, part of a social contract and civic duty, just like stopping a red light.

“We have a problem here,” she said in an interview. “The world is paralyzed, people have lost their livelihood, their health, their hope. When you put all these things on the scales, come on, just get vaccinated! And if you really don’t want to, stay home. ”

To solve the mystery and care for people under the age of 16, the government allowed the sites to offer quick tests as an alternative to the Green Pass. But many business owners responsible for ordering and financing test stations have found logistics impractical.

Unlike concerts and football matches, however, going to work is not a luxury for most people.

An assistant teacher at a school for children with special needs in central Israel refused to be vaccinated or, like her employer, the city of Kochav, Jair-Zur Igal, instead asked to take a negative Covid test on a weekly basis.

The school banned her from going to work, supported by the city council.

Teaching assistant Seagal Avishai appealed to the Labor Court in Tel Aviv. She claims that the council’s requests “affect privacy” and are “without legal basis” and that the requirement for a weekly test “was intended to pressure her to be vaccinated contrary to her beliefs”, according to court documents.

Last month, the court ruled against her, saying her rights should be balanced against those of teachers, children and their parents in “life, education and health”, citing the particular vulnerability of the children in question.

In a country with many doses to go around, access to the vaccine is not a problem, said Gil Gan-Mor, director of the civil and social rights unit at the Israeli Civil Rights Association.

In Israel, he said, “Anyone who complains can get the vaccine tomorrow morning.”

But in the absence of legislation, employers draw up their own policies. At least one college relied on the Labor Court’s precedent of requiring all staff and students to receive a green card to attend classes on campus.

In another lawsuit, the health ministry wanted to distribute lists of unvaccinated people to local authorities so that authorities could, for example, identify unvaccinated teachers who have returned to school and try to persuade them to get vaccinated. .

Citizens’ protection groups have filed lawsuits to prevent the ministry from distributing the lists, arguing that this is a violation of privacy and that medical information cannot be adequately protected. The case is before the Supreme Court.

Even where there are rules, implementation is unstable.

The concert in Tel Aviv was the first time I was asked to show my Green Pass – and the last. Since then, my family has spent a weekend at the B&B in Galilee, where breakfast is served in a closed room for all guests, including unvaccinated children. A crowded Italian restaurant in the area made it clear that it did not comply with the regulations by offering us indoor seats with a 7-year-old child.

Back in Jerusalem, when I called to make a reservation for two at my favorite restaurant, where I served expensive fresh cuisine from a lively open kitchen, I was asked if we both had Green Passes. But when we arrived, no one wanted to see them.

The tables were set as comfortably as ever. Strangers sat side by side by the bar. Our young waitress was exposed. Dinner at the next table doubted how safe it was for Kovid, then shrugged and continued with his dessert.

Some restaurant owners and managers have complained that the pandemic has left them in a chronically short staff and that they cannot be expected to control customers as well.

“It’s a shame,” said Eran Avishai, co-owner of a restaurant in Jerusalem. “I have to ask people all sorts of personal questions.” Some clients have come up with excuses and notes explaining why they haven’t been vaccinated, he said, and “all sorts of things I don’t want to hear about.”

However, some restaurants strictly follow the regulations, even checking the Green Pass against customers’ ID cards. Based on experience, friends share tips and recommendations on Facebook about policies for entering local eateries and holes. And at least one hipster pub in Jerusalem only wants an unknown clientele to show green gaps and use the system to protect the unwanted.

I feel a personal sense of lightness and relief as I deal with my new vaccinated life. I even got caught that day in the supermarket without a mask on, which is still required in public places.

We live in wonderful isolation. Virus restrictions still make most trips discouraging, and non-Israelis are usually unable to enter the country. I miss my family abroad. Until the rest of the world catches up, we are a nation living in a bubble.