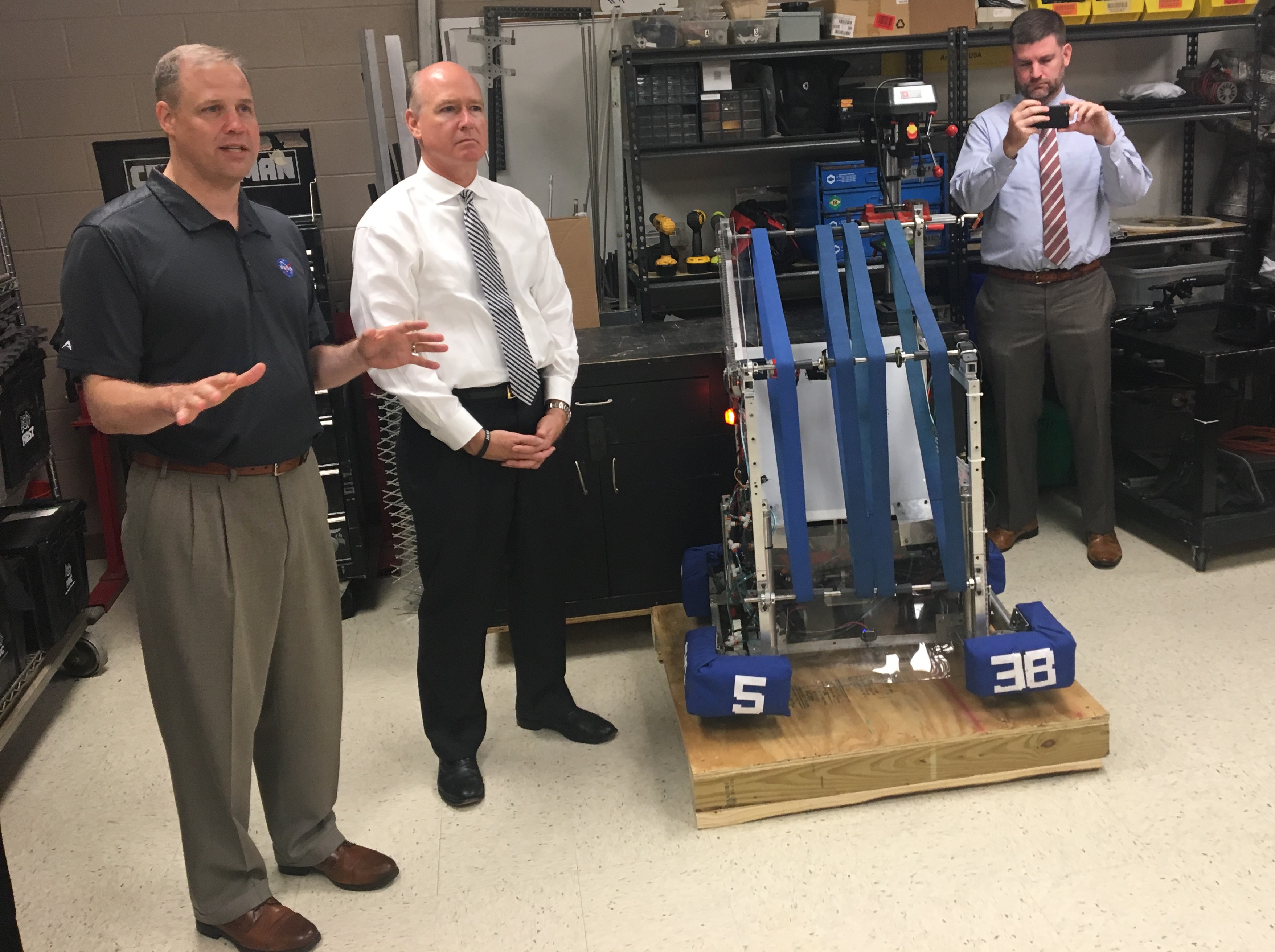 He came out with his right hand outstretched, smiled, and told everyone he met to call him "Jim."

Maybe it just makes life easier when your name is Bridestin. But for a NASA administrator attending an Arab high school on Friday, Jim Bridenstein wanted to make a friend of his own, as he made efforts to bring the Americans back to the moon in 2024.

He visited with students prior to engineering at the school around 30 miles south of Huntsville, marveling at the racing moon they had built ̵

1; and rebuilt, they told the space boss, specifically about his visit.

He oversees a demonstration of a robot built in a six-week after-school disaster program earlier this year by students at Robotics Schools – a robot that competed at the World Championships in Houston in April.

Bridenstein did not mention the main message, which would come hours later at the Marshall Space Flight Center in Huntsville – that the center would

But since it encouraged students to pursue the space program as a possible career, one might wonder if the room has some young brain power that would help soda make a visit to Mars a reality.

"I heard wonderful things about this high school," Bridenstein said while talking to students and school administrators. "It's clear that you do amazing things here at a very young age. And maybe one day NASA will be able to involve you in some of the projects we're working on."

Bridenstein came to the Arabian High at the invitation of and accompanied by U.S. Rep. Robert Aderholt, R-Haleville, which is NASA's most republican science appropriation subcommittee.

"When Robert says, 'Hey, Jim, why don't you help this or help this or get down to Alabama 4th,' the answer is 'Absolutely, we'll be there,'" Bridenstein said. "He is the guy who writes our checks."

Of course, it takes more than money to get NASA into space, and the administrator praises the students he meets to meet the challenges they face and the teachers who to guide the way.

He asked students a series of questions about building a moon buggy and congratulated the robotics program on bringing real-world projects into the classroom.

After the robotic demonstration, Bridenstein said, "This is a very appropriate program. It strongly mimics what NASA does. That's why it's so valuable. "

And speaking to about 50 students at the school's media center after his tour of campus, Bridenstein said," There are no opportunities for people in this room. "

Of course, every NASA event is always improved by astronaut. Ricky Arnold, a two-time mission veteran to the International Space Station, told his students about space travel and answered questions ranging from G-force ascending and descending to how astronauts work to stay healthy over many months missions aboard a space station.

"What I want you to think is how you can be a part of this journey," Arnold told the students.

So does Bridestin. He referred to the recently celebrated 50th anniversary of the moon landing on Apollo 11 as he spoke to students.

From the high school classroom in Arabic to the Moon to Mars, to … hey, who knows?

"What are we trying to do now," Bridenstein said, "a new generation of space explorers is gathering, so in 50 years' time people will be celebrating what we are doing today."