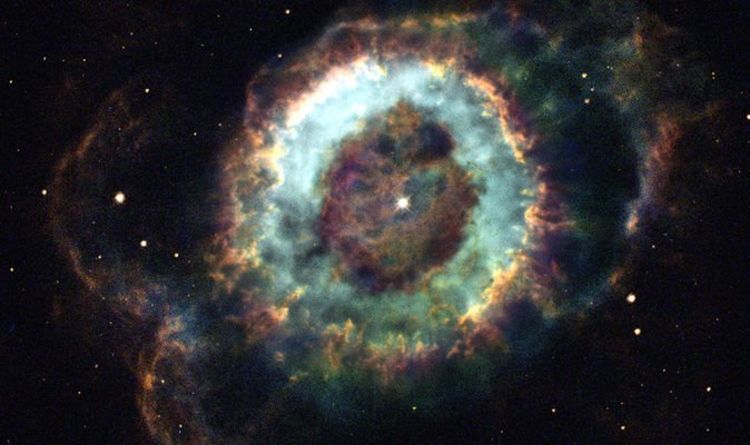 In the image, a mysterious pair of glowing eyes glance threateningly in our direction. Piercing "eyes" are the most striking feature of what resembles the face of an alien creature. But this is not a ghostly ghost. Hubble is looking at a titanic front collision between two galaxies.

The image shows the outline of a face in a ring of blue stars, with other groups of new stars forming a nose and a mouth.

Each "eye" is the bright nucleus of a galaxy, one of which is stuck in the other.

A violent encounter gives the system an arresting "ring" structure in only a short time, about 100 million years.

The crash pulled and stretched the galaxy's gas, dust, and star discs outward.

This action forms an intense star formation, which shapes the nose and face.

Ring galaxies are rare; only a few hundred of them exist in the large space quarter.

These galaxies had to collide exactly in the right orientation to create the ring.

Hubble views this unique system as part of a "snapshot" that takes advantage of the occasional gaps in the telescope's observation circuit to squeeze in additional images.

Astronomers plan to use this innovative Hubble program to take a closer look at many other unusual interacting galaxies.

The purpose is to construct a robust sample of close interacting galaxies that could offer an insight into how galaxies have grown over time through galactic fusions.

Analyzing these detailed Hubble observations, astronomers could choose which systems are the main targets for follow-up to the James Web Web Space Telescope, scheduled to launch in 2021