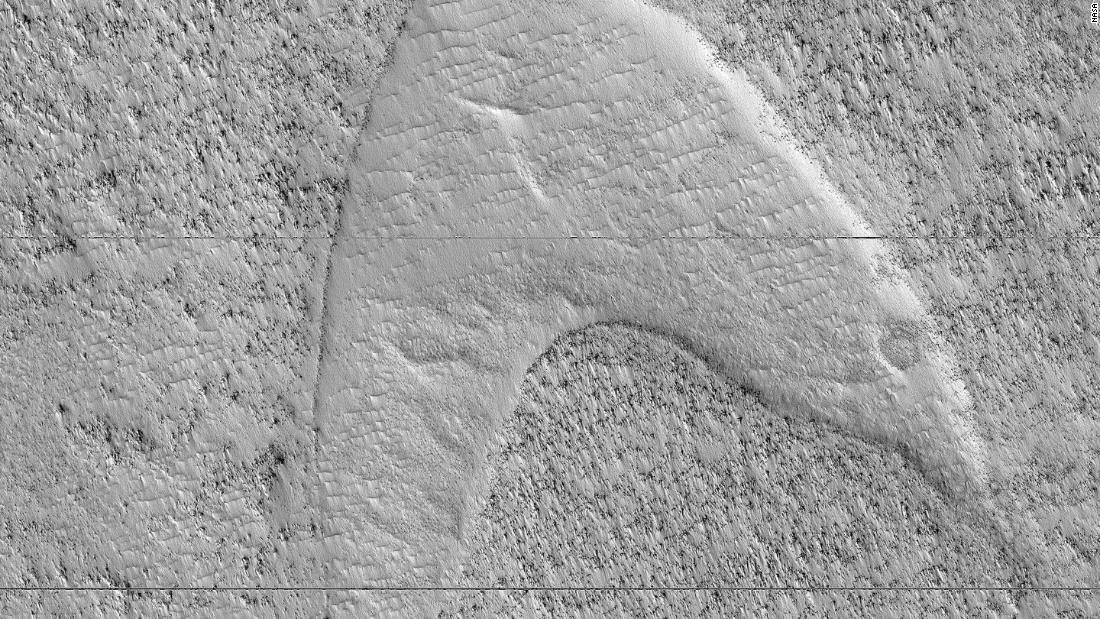 Cooled lava helped preserve and footprint of where dunes once moved across a southeastern region on Mars.

NASA's InSight lander used a camera on its robotic arm to capture this sunset on Mars on April 25.

InSight's seismometer recorded a "marsquake" for the first time on April 6, 201

A photo of a conserved river channel on Mars taken by a satellite orbiting satellite with overlaid color to show different elevations.

NASA has been exploring Mars since 1965. Here are some of the best moments captured by Mars missions over the years.
The Mars Express mission of the European Space Agency captured this image of the Korolev crater, more than 50 miles across and filled with water ice, near the North Pole.

This is NASA's InSight's first selfie on Mars. It displays the lander's solar panels and deck.

This perspective of Mars 'Mars' hemisphere from July 9, 2013, is actually a mosaic consisting of 102 Viking Orbiter images. At the center is the Valles Marineris canyon system, over 2,000 kilometers long and up to 8 kilometers deep.

Rovers can take selfies too. This self-portrait of the Curiosity Mars rover shows the vehicle at Quebra drilling site in the Murray Buttes area on the lower Mount Sharp.

Mars is far from a flat, bare-cut landscape. Nili Patera is a region on Mars in which dunes and ripples are moving fast. HiRISE, on the Mars Reconnaissance Orbiter, continues to monitor this area every couple of months to see changes over seasonal and annual time scales

What are the blueberries doing on Mars? These small, mineral hematite-rich concretions are near Fram Crater, visited by NASA's Opportunity rover in April 2004. The area shown is 1.2 inches across. The view comes from the microscopic imager on the Opportunity's robotic arm, with color information added from the rover's panoramic camera. These minerals suggest that Mars had a watery trap.

Mars is known to have planet-encircling dust storms. These images from NASA's Mars Global Surveyor orbiter show a dramatic change in the planet's appearance when haze raised by dust-storm activity in the south became globally distributed

Curiosity took images on September 9, 2015, of Mount Sharp, a hematite -rich ridge, a plain full of clay minerals to create a composite and rounded buttes high in sulphate minerals. The changing mineralogues in these layers of Mount Sharp suggests a changing environment in early Mars, although they involve exposure to water billions of years ago.

This image, combining data from two instruments onboard NASA's Mars Global Surveyor, depicts an orbital view of the north polar region of Mars. The ice-rich polar cap is 621 miles across, and the dark bands in are deep troughs. To the right of the center, a large canyon, Chasma Boreale, almost bisects the ice cap. Chasma Boreale is about the length of the famous Grand Canyon of the United States and up to 1.2 miles deep

Although Mars is not geologically active like Earth, the surface features have been heavily shaped by wind. Wind-carved features such as these, called yardangs, are common on the Red Planet. On the sand, the wind forms ripples and small dunes. In Mars' thin atmosphere, light is not scattered much, so the shadows cast by the yardangs are sharp and dark.

From its perch high on a ridge, Opportunity recorded this image of a Martian dust devil twisting through the valley below. The view looks back at the rover's tracks leading up the north-facing slope of Knudsen Ridge, which forms part of the southern edge of the Marathon Valley.

HiRISE took this image of a kilometer-sized crater in the southern hemisphere of Mars in June 2014. The crater shows frost on all its south-facing slopes in the late winter as Mars is heading into spring

A dramatic, fresh impact crater dominates this image taken by the HiRISE camera on November 19, 2013. The crater spans approximately 100 feet and is surrounded by a large, rayed blast zone. Because the terrain where the crater formed is dusty, the fresh crater appears blue in the enhanced color of the image, due to the removal of the reddish dust in that area

Opportunity used its panoramic camera to record this eastward horizon view on October 31, 2010. A portion of the Endeavor Crater's eastern rim, nearly 19 miles in the distance, is visible over the Meridiani Planum