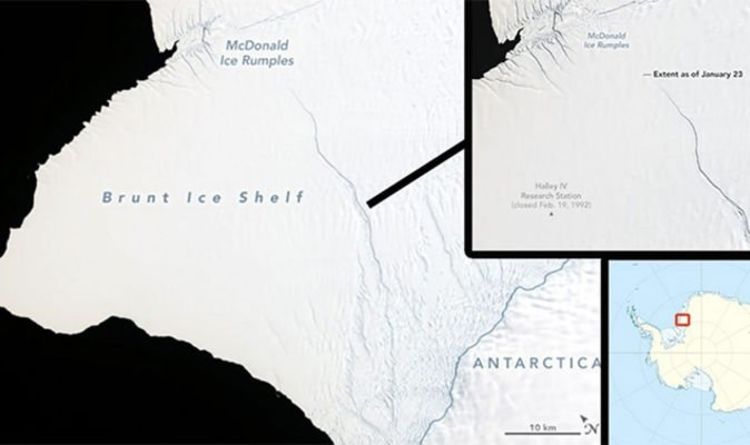 They have said this causes concerns about the "uncertain future" that breakage would create for research opportunities there. Scientists have been observing the brunt ice shelf since 1915 but say this crack would be the biggest since observations began decades ago. The scientists said: "It is not clear how the remaining ice shelf will respond after the break, posing an uncertain future for scientific infrastructure and a human presence on the shelf that was first established in 1955."

A notable crack occurred in October 2016, which continues to progress east, but scientists say their more "immediate concern" is the rift running through the brunt ice shelf

NASA said the rift was "previously stable for about 35 years, this crack recently started accelerating northward as fast as 4km per year. "

Satellite images captured by NASA in January showed the rift, also known at the 'Halloween Crack' which first appeared in October 201

Glaciologist at NASA's Goddard Space Flight Center, Joe MacGregor, said: "The near-term future of the ice shelf is likely to depend on where McDonald's ice rumples

"If they go upstream of the McDonald's ice rumples, then its possible that the ice shelf will be destabalised."

NASA has said the calving effect of the iceberg was part of the "life cycle of the ice shelves, but the recent changes are unfamiliar in this area. "

Through satellite imagery and NASA research planes, they are able to discover and study icebergs

In October a NASA research plane discovered a mile-wide rectangular

The iceberg was known as a "tabular iceberg", recognizable by its clean-cut edges

This kind of iceberg forms when it breaks off ice shelfs with precision, but is

Glaciologist at the University of Maryland Kelly Brunt said in an interview to Live Science: "We get two types of icebergs."

"We get the type that everyone can envision in their the head that sank the Titans cs, and they look like prisms or triangles at the surface and you know they have a crazy subsurface

"And then you have what are called 'tabular icebergs'

" What makes this one bit unusual is that it looks almost like a square. "