Nationals manager Davey Martinez ejected from the World Series after going bananas during "Take Me Out to the Ballgame." 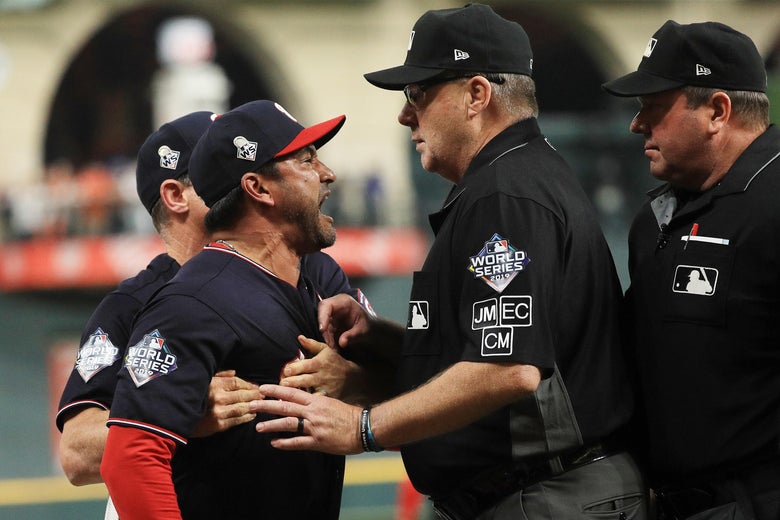 I just want to point out that this meltdown happened during "Take Me Out To The Ballgame" which is not clear on Fox broadcast, and it's hilarious pic.twitter.com/pHFJwSmLMQ

Washington Nationals manager Davey Martinez was, ahem, not happy about home plate umpire Sam Holbrook's decision to call Nats shortstop Trea Turner out for a runner interference on a pivotal play in the top of the seventh inning Tuesday night. Turner's squib back towards the mound turned in Astros pitcher Brad Peacock rushing a throw to first and, as Turner ran through the bag, he collided with Astros first baseman Yuli Gurriel's head, knocking it off his hand.

Trea Turner was called out on this play.

The controversial call robbed Washington of a prime scoring opportunity that the baseball gods — and Anthony Rendon — atoned for shortly after by hitting a towering two-run shot to stretch the Nationals one-run advantage into a 5-2 lead.

Martinez was clearly peeved by the call, and there may have been some residual frustration simmering in the Nats dugout about some close balls and striking calls over the past couple of games. The Nats manager tried to protest the call, prompting umpires to go head to head and confer on ruling with MLB in New York. After a four-plus minute delay, Martinez appeared to have gotten his frustration out, and life appeared to move on. That is, until the middle of the inning, when the national TV audience went to commercial, the organist cued up "Take Me Out to the Ballgame" for the seventh inning stretch, and Martinez went bananas trying to fight though Nats bench coach Chip Hale first to get in Holbrook's face, and then to tangle with crew chief Gary Cederstrom. It was like an old school, performative manager-umpire bust-up and it got Martinez tossed, making him the first manager in nearly 25 years to get ejected from a World Series game.

During the 7th inning stretch, Nationals Manager Dave Martinez was visibly upset with the umpires and was ejected during the exchange. pic.twitter.com/AZ23MusrNN

“Part of me just said, 'Hey, we'll protest the game.' I know we can't. But just check the rules, and they did that, ”Martinez said after the game. Honestly, [I was protesting] nothing because I knew we didn't. But I wanted them to look at the replay. ”

“It was the right call,” MLB Chief Baseball Officer and former manager Joe Torre said. "Of course, then you watch Davey Martinez, and I can relate to that."