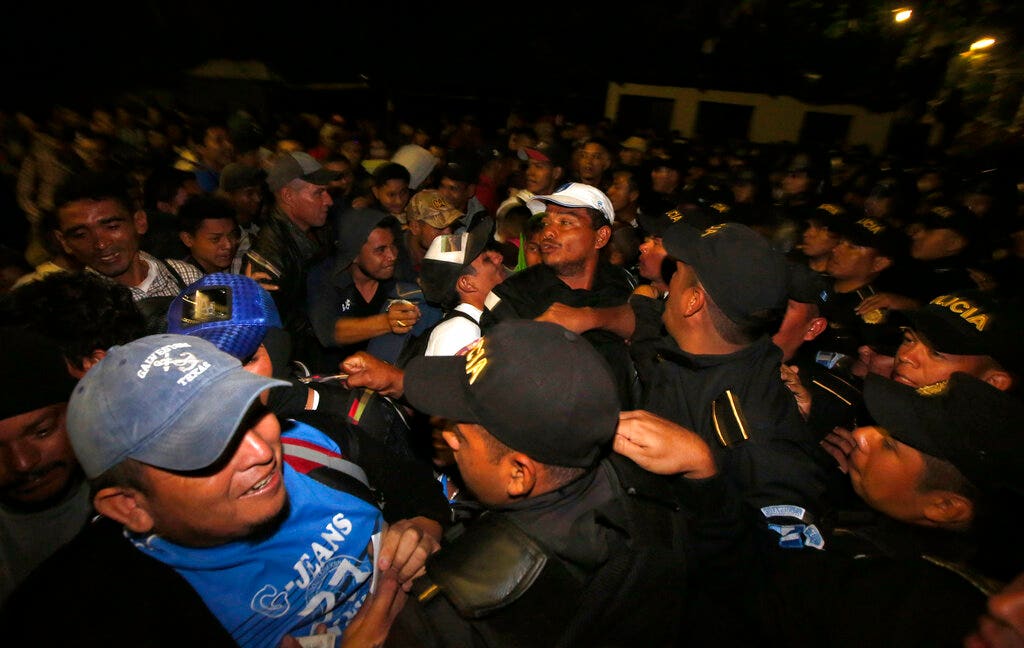 GUATEMALA-MEXICO BORDER – Approximately 1,000 Central American migrants in the new caravan have begun the process of crossing into Mexico from Guatemala, and a Mexican immigration official stationed at the border between the two countries told Fox News on Thursday night.

A new process instituted by Mexico means that migrants will have to wait five days for their paperwork to be processed before entering the country. The new system is meant to keep things orderly after the last caravan rushed the border through the Suchiate River at the Guatemalan border city of Tecún Umán

Migrants arriving at the border were given identification bracelets and directed to a Mexican immigration office, where they filled out paperwork for a one-year visa to work and travel in Mexico.

A RAPE SUSPECT, AND RADIO SHOW HOST AND AN IMMIGRATION RIGHTS GROUP AMONG THOSE LINKED TO CENTRAL AMERICAN ORGANIZING CARAVANS [1

9659003] The members of the caravan are currently staying in Guatemalan shelters and camping out in a nearby park. However, officials are planning to open a shelter on the Mexican side of the border Saturday to house migrants until they are allowed to enter

So far, there have been no visible confrontations like the fights marked the arrival of another Central American caravan in October, when migrants tried to push through closed gates and ranks of riot police, leading authorities to fire pepper spray. However, some caravan members have told Fox News that they do not trust the Mexican government and may try to cross the border bridge again.

Previous estimates put the caravan at about 1,800 people, including about 100 from El Salvador. But, many of the migrants were still traveling through Guatemala, and it was difficult to say how big the caravan would be once it began making its way through southern Mexico.

Julia Escalon, 43, of the Honduran city of San Pedro Sula , resting under the shade of a tree on the Guatemalan side, cradling her 2-year-old daughter in her arms. Escalon brought along a total of four daughters on the trip.

"In San Pedro, we have nowhere to live. rent and place, "Escalon told The Associated Press. "I'm going to fulfill my dream and get to the United States."

However, that may not be easy. The border city of Tijuana was saturated by the first caravan in November, testing the patience of the city's residents, and Mexico's new government has since agreed to house third-country migrants while their asylum claims are heard in the United States