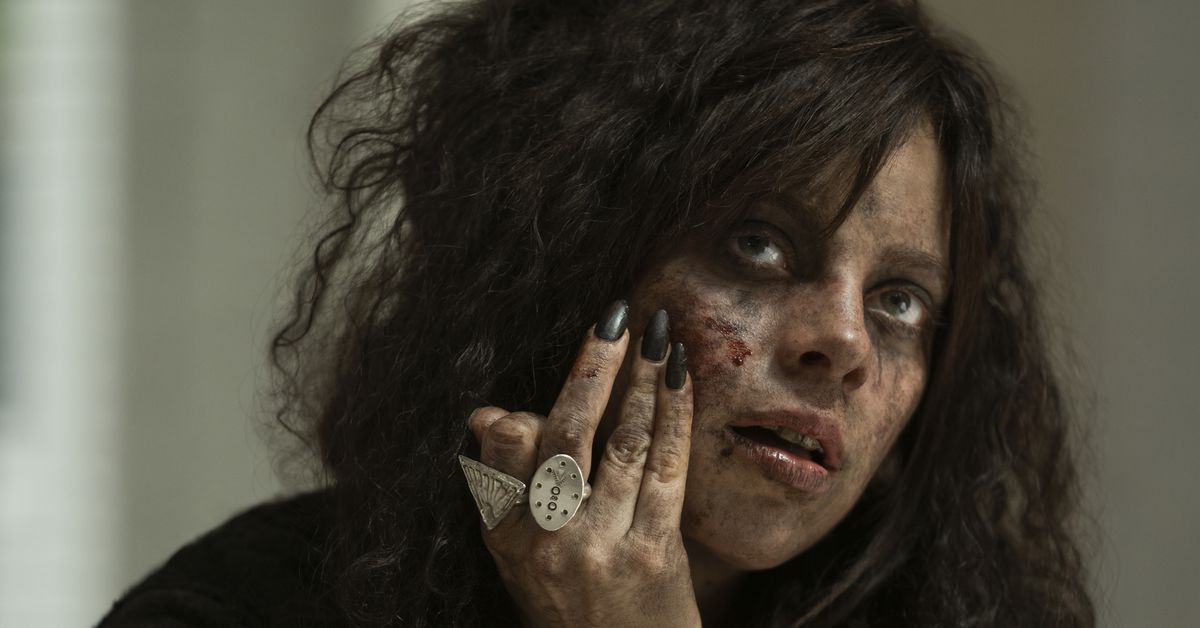 Daybreak 's Josh Wheeler (Colin Ford) has a killer origin story. But what separates him from Harry Potter, Katniss Everdeen, or any of the troubled teen protagonists who've scraped through their own apocalyptic YA stories is that he thinks of his life in terms like “killer origin story.” From her first Ferris Bueller- inspired moments onward, the new Netflix zombie comedy regularly smashes the fourth wall to deliver a self-aware series where characters are as pop-culture savvy as their audience. The latest attempt to appeal to teenagers hungry for bingeable content offers an unwieldy mix of winking comedy, gory thrills, satirical social commentary, and earning teen storytelling, and it's equal parts exhilarating and exhausting.

It's also a far cry from the source material that inspired it. Brian Ralph's cult hit comic Daybreak ̵

1; published in installments throughout the 2000s, then released as a graphic novel in 2001 – is an intimate zombie story told completely in first person. For the Netflix adaptation, creators Brad Peyton (director of Rampage ) and Aaron Eli Coleite (a writer on Heroes and Star Trek: Discovery ) go big, expanding their world as far as it will go. Peyton and Coleite extend the series' point of view beyond one central protagonist. Instead, they take in a whole ensemble of teen characters left behind after a nuclear bioweapon melts most people over the age of 18, and leaves the rest as zombie-esque creatures called “ghoulies.”

The image of a mushroom cloud exploding over Glendale, California is one genuinely unsettling moment in a series that mostly aims for frothy, gory fun. The show flashes back and forth between the sepia-toned apocalyptic present and the start of the school year, digging into the gap between who their teen characters used to be back in high school, and who they choose to become in a world without rules. Daybreak pulls heavily from the Buffy the Vampire Slayer playbook, using its genre premise to heighten the dynamics of the high school experience. In this case, the difficulties of forging a high school tribe made literal. Cafeteria lunchroom cliques have spilled over into neighborhood clans, from the popular “Disciples of Kardashia” to the nerdy “STEM Punks” in full Steve Jobs cosplay.

Lording over it all is a violent cabal of jocks ice by a former quarterback who now goes by the name "Turbo Bro Jock" (Cody Kearsley). They wear absurd leather outfits and travel in fleet of souped-up vehicles, but though Daybreak is the first to acknowledge that they're Mad Max wannabes, that doesn't make the cribbing feel any less one-note. Defaulting on the idea of ​​jocks as bullies is just one of the many places where Daybreak lazily rehashes 1980s tropes, even as it's desperate to be a cutting-edge Gen Z series.

The show fairs better with its leads. As a proud loner, Josh quips that the apocalypse is the best thing that ever happened to him. He is a former C-student who is now flourishing in this new reality, thanks to his natural Canadian survival skills. But since he still deals with bloodthirsty ghoulies, mutated animals, and those deadly jocks, he reluctantly teams up with 12-year-old pyromaniac Angelica Green (Alyvia Alyn Lind) and jock-bully-turned-pacifist Samurai Wesley Fists (Austin Crute). In the first five episodes screened for critics, the protagonists trade off narration duties in episodes that dig into their pasts through their preferred pop-culture lenses. In the Place of Josh's Quirky Direct Address, Angelica favors the voiceover of a Martin Scorsese gangster drama while Wesley processes his journey through his love of anime and kung fu movies, enlisting the appropriate celebrity cameo to narrate his story.

of tones and perspectives adds a jolt of energy to the series, but Daybreak still finally feels like a lot of style with very little substance. The show is loosely anchored around Josh's quest to find his would-be girlfriend Sam Dean (Sophie Simnett), the affable British classmate he has seen since the nuclear bomb detonated during their school's homecoming football game. Is a tedious mission that characterizes the aimless nature of Daybreak 's storytelling. This is a show that lives or dies by how many viewers connect to its quirky characters and their efforts to forge a new tribe, which they slowly start to build in an abandoned shopping mall, à la George Romero's Zombie Classic Dawn of the Dead.

The young cast all deliver what's asked of them, lending a glossy CW sheen to their respective roles. (Josh seems curiously handsome and well-adjusted for someone who was supposedly a high-school outcast.) But only Austin Crute as Wesley elevates the material he's given, delivering a funny but grounded take on a nerdy black football-playing stoner with a newfound moral code and a secret romantic past. The other standout performance comes from Erstwhile Ferris Bueller himself, Matthew Broderick, who plays sunny Principal Burr. Although it initially seems like Broderick is just there for a quick, knowing cameo (like Michael J. Fox's one-scene appearance in Netflix's teen-time travel movie See You Yesterday ), he actually winds up playing a surprisingly big rolls in the flashback storylines. Broderick undercuts the frenetic energy of the series with a gentler comedic tone that works as an effective contrast.

Broderick is also the only one who even comes close to selling the show's tiresome jabs at " woke sensitivity. He brings a welcome level of earnestness to, for instance, a gag about the school's nut-free campus. Sadly, the same can't be said for eye-rolling jokes about, say, a character who “self-identities his gender as a seahorse.” Despite his penchant for pop culture namedropping, Daybreak 's biggest influenza goes unspoken; it mixes feel-good teen storytelling with a provocatively irreverent tone in a way that very many calls Ryan Murphy's teen shows to mind. Daybreak is like Glee turned up to 11, with action scenes in place of musical numbers.

Unfortunately, unlike Rachel Berry, the action sequences in Daybreak never quite sing. The show attempts to use creative camerawork and bombastic musical cues to hide the fact that it actually says very little to its action scenes. Instead, Daybreak gets the mileage out of its willingness to deliver gruesome imagery. Limbs go flying, minor characters are regularly offed, and Krysta Rodriguez's high-school-teacher-turned-demonic-witch provides some disturbing body-horror elements. (Kudos to Rodriguez for her commitment to a truly bizarre role.) There's an R-rated edge to violence and swearing in Daybreak although its comedic sensibilities definitely skew younger.

the problem with Daybreak is that for every solid joke or hilarious visual gag, there's an attempt at irreverent topicality that falls flat, or an homage that feels lazy rather than clever. The show's mile-a-minute pacing never succeeds at disguising the fact that it builds on fundamentally unsteady ground. Like many previous Netflix series, Daybreak strategically ends episodes on cliffhangers to encourage viewers to autoplay into the next one. (Still meta enough to call out that binge-baiting practice for what it is.) While Daybreak is definitely watchable, it feels like binging on a bag of candy. It still gives viewers a sugar rush, but without any substance.

Daybreak is at its best when creators lean into their most absurdist impulses. The fifth episode softens the show a bit, as the ragtag group of survivors decide to throw the homecoming dance that was thwarted by the apocalypse. The idea of ​​kids banding together after adults is destroyed by the world is a much more timely message than any of its 1980s teen-movie throwbacks or Gen Z irreverence. If the rest of the season leans into that direction, Daybreak could possibly emerge with a comedic voice that feels like something more than a pastiche.

The 10-episode first season of Daybreak ] launches on Netflix on October 24th.