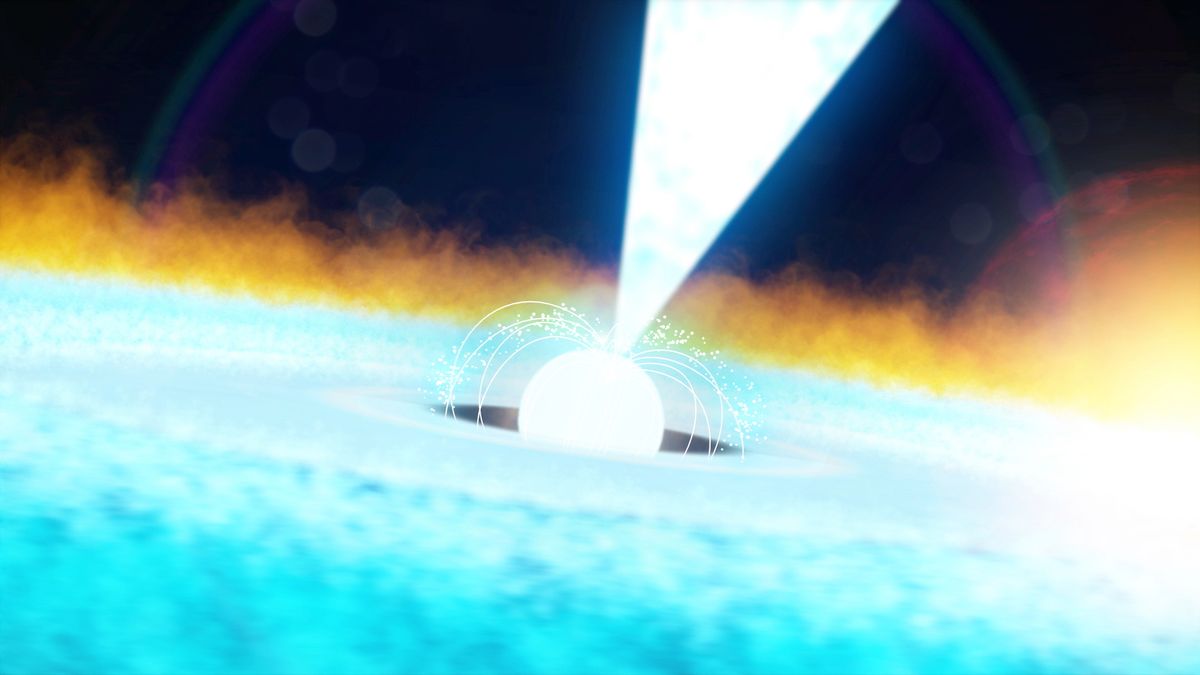 A telescope mounted on the International Space Station discovered a record X-ray launch coming from a flash on the surface of the remains of a blasted star.

On August 20, at about 10:04 AM EDT (0204 GMT on August 21), NASA's NASA NASA Space Composition Telescope, located at the space station, discovered a sudden and extreme X-ray jump. The brightest X-ray explosion observed by NICER released as much energy in 20 seconds as our sun in about 10 days, according to a NASA statement.

The burst came from the SAX object J1808.4-3658 or J1808, a pulsar (a kind of neutron star or the remnants of a star that exploded as a supernova far in the past). The extra-bright burst was created by a thermonuclear flash on the surface of this pulsar, according to the statement.

Related: This newfangled X-ray pulsar orbits its partner at a recording rate

"This blast was exceptional," lead researcher Peter Bult, an astrophysicist at the Godard Space Center at NASA in Maryland, said in a statement. "We see a two-step brightness change that we believe is caused by the discarding of separate layers from the pulsar surface and other features that will help us decode the physics of these powerful events."

This ultra-bright recording-tuning event is classified as Type I X-ray, which is the most common type; it is identified by a brightness that often rises quickly and then slowly diminishes.

With this observation of NICER, scientists will be able to improve their understanding of such extreme eruptions and learn more about what causes them on objects such as the J1808 pulsar.

Pulsars often rotate rapidly and emit X-rays from hot spots at their poles. The J1808, which is about 11,000 light-years from Earth in the constellation Sagittarius, rotates about 401 times every second.

The eruption of the surface of this pulsar returns to the binary system in which it is located, which includes a brown dwarf (an object too large to be a planet and too small to be a star). Hydrogen gas flows from this site to J1808, forming an accretion disk around it. After a period of time, this gas becomes so dense that part of it will lose its electrons (or ionize), which impedes the movement of this gas, and therefore the light, around the pulsar in this disk.

Involved in this slow motion, this energy begins to accumulate, heat, ionize, and create even more of this "trapped energy", which makes the movement of gas into the disk even more difficult. Eventually the gas in the star disk rotates inwards until it finally hits the pulsar. Hydrogen in the gas falls to the surface, adding to the "sea" of such material. At the bottom of this sea, extreme temperatures and pressures force hydrogen nuclei to merge and form helium nuclei, a process known as nuclear fusion.

"Helium precipitates and builds its own layer. Once the helium layer is several meters deep, the conditions allow helium nuclei to merge into carbon. Then the helium erupts explosively and fires a thermonuclear fireball throughout," pulsating, in a statement by Zawan Arzumansky, Godard, NICER's Deputy Chief Investigator.

After the eruption began, the burst brightness leveled off for only a second before increasing again, only at a slower pace, NICER data showed. This brief change in tempo and tempo was caused by an accumulation of energy that blew the hydrogen layer of the pulsar into space. The object's helium blast was then blown into space as the burst continued to increase. After the helium layer erupted into space, it quickly outpaced hydrogen and then settled back on the pulsar.

After this wild explosion, the pulsar illuminated again, but scientists still cannot explain this final illumination.

Researchers investigate these observations in a paper published October 23 in The Astrophysical Journal Letters.