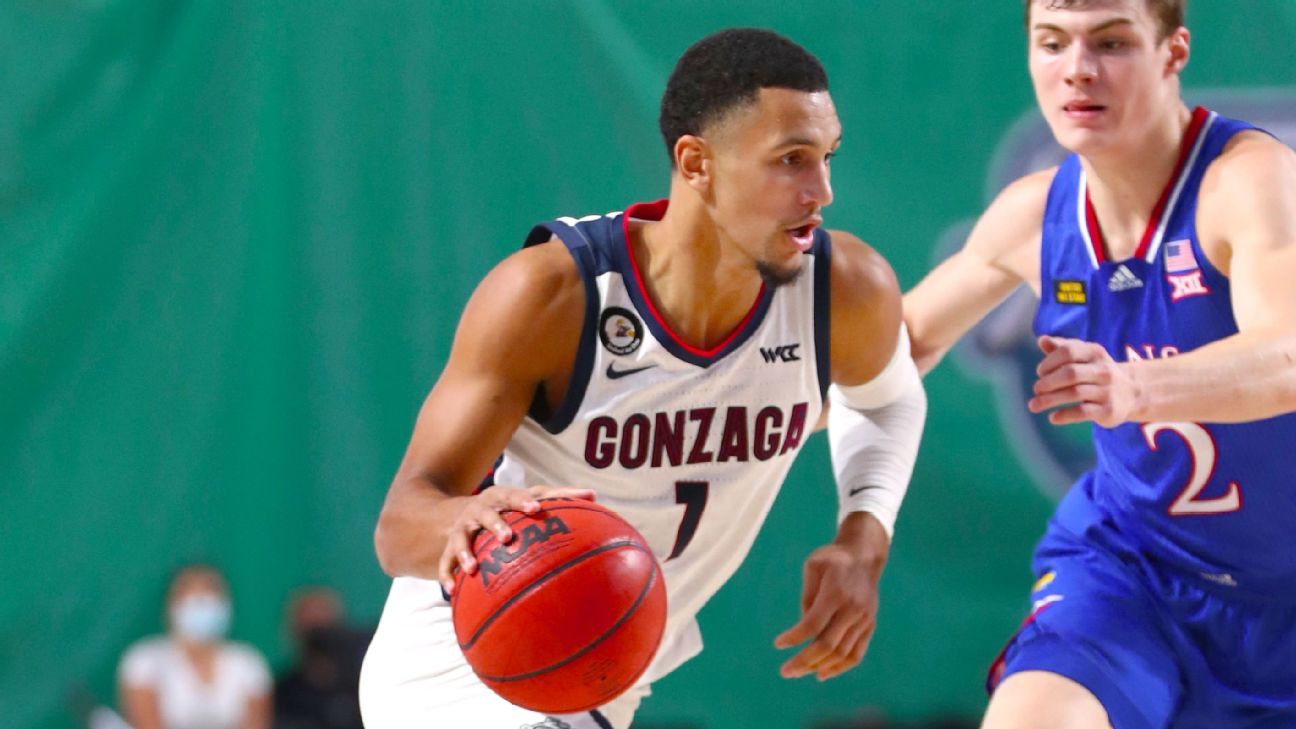 Drew Tim scored 25 points, Jalen Suggs had 24 and Corey Kispert added 23 as No. 1 Gonzaga pulled away from No. 6 Kansas for a 102-90 victory on Thursday at the opening of the men’s basketball season for both teams.

The Bulldogs took a double-digit lead in the first half at Rocket Mortgage Fort Myers Tip-Off, then saw the Jayhawks level the game in the second half before taking them home. Gonzaga went 22-7 to raise 96-78.

Suggs, who got into trouble in the first half, scored 17 of his 24 points in the second half.

Marcus Garrett led Kansas with 22 points and Ochay Agbaji added 17 points. Agbay picked up his fourth foul in the middle of the second half, which injured the Jayhawks. When he left, Kansas was 70-67 behind.

After Gonzaga led 29-15, Kansas played a few games to reduce the deficit to just five. However, Kispert got hot and kept Jayhawk in port. Gonzaga led 54-46 at halftime.

With the victory, Mark Fue of Gonzaga won his 600th victory in his 724th match, becoming the third fastest coach to achieve 600 victories in Division I history after Adolf Rupp (704) and Jerry Tarkanyan (720), according to ESPN Stats & Information.

Three non-Gonzaga athletes isolated themselves in their hotel rooms after one was positive for COVID-19.

A total of 112 tests were given and none of the players from any of the four participating teams received a positive result, event officials said. Auburn and St. Joseph also took part in the event.

The way these teams played each other would come as no surprise to see Gonzaga and Kansas meet late in the NCAA tournament, perhaps the Final Four.

The Bulldogs are deep and look like they can play defensively, like any other Malko team. They can score inside and out.

Kansas never gives up. There are not many teams in the country that can enter a hole of 14 points to the national team No. 1 and return to equalize it. However, the Jayhawks could not recover from Gonzaga’s second offensive attack.

Gonzaga, who plays four no-conference games during the West Coast, including the top 10 games with Baylor and Iowa, will play Auburn at 11:00 ET ET on Friday.

Kansas, which also has a challenging out-of-conference schedule, including Kentucky and Creighton, will play St. Joseph on Friday.