One mistake and the game is over: one man’s hike through Antarctica without help | sports 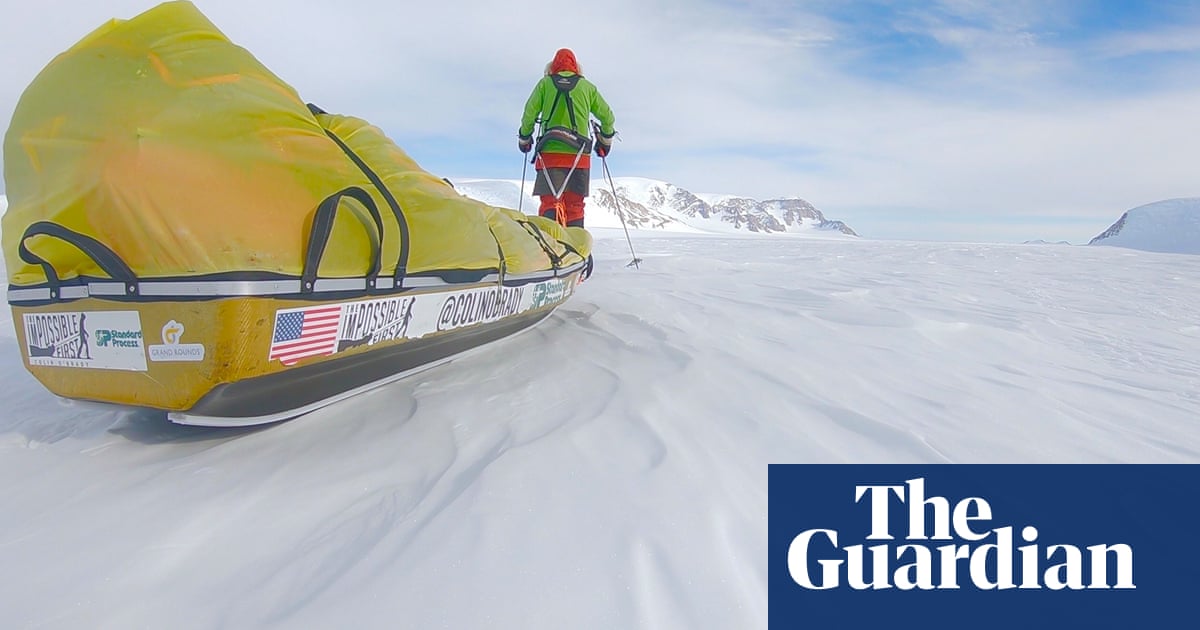 N.an avalanche of hundreds of miles in Antarctica at the end of 2018, American Colin O’Brady reached a memorable landmark: the South Pole. It was just a waypoint on the way to O’Brady’s pursuit – the first of its kind unassisted, unsupported solo crossing the continent. Even so, when it got south, it was time for a makeshift celebration. He made a handstand as if holding the ground.

“I was at the South Pole, at the bottom of the world,”

; O’Brady tells the Guardian. “It was a moment of riding up. My emotions were over me … I am grateful to have let this positive moment pass. “

Things have not always been as meaningless as O’Brady has moved through freezing temperatures and darkness while competing with Britain’s Louis Rudd. Now O’Brady shares his story in a new book, The Impossible First: From Fire to Ice – Crossing Antarctica Alone.

O’Brady recalls his journey of 932 miles in 54 days. He also discusses his previous experience, setting speed records for the Seven Summits – raising the highest point on all seven continents – as well as the Explorers Grand Slam, which includes reaching those peaks as well as the last mile to the north and south poles, He reflected on a time when such achievements seemed impossible – an accident in Thailand left his legs burned, and then he had to learn to walk again, assisted by his mother Eileen.

“Of course there were obstacles,” O’Brady says. “As much as I do not wish them my worst enemy, I have learned my thoughts about positivity and love from my mother, who I can not just achieve but thrive with courage and strength, [toward] bigger goals. “

National Geographic questioned O’Brady’s records earlier this year. The article says that O’Brady used a lane for a maintained car during the last part of its intersection. The article cites a previous self-crossing of the continent – a longer trip than Borhe Osland in 1997, using Iceland at several points. The article asked why the lane constitutes technological assistance, while the maintained track of the vehicle does not. O’Brady called the National Geographic article “completely factually inaccurate,” adding that it contained “clear omissions.” He also asked the magazine to withdraw the article.

The book contains a cast of characters, including himself; his wife, Jenna Besov, who provided key support throughout the trip; and his rival Rud. And what he sees as a non-human player: Antarctica.

O’Brady admits that most readers will never visit the southern continent. He tried to provoke him through sensory descriptions of what he calls “range, grandeur, intensity, emptiness.”

As a kid, he reads about famous Antarctic explorers from the early 20th century, such as Roald Amundsen, Robert Scott and Ernest Shackleton. However, the Explorers Grand Slam was the first to take O’Brady to Antarctica. He learned of unsuccessful attempts at a single, unassisted, unsupported intersection – like the one by Henry Worsley, who cost Worsley his life.

“I was just really fascinated with Antarctica,” O’Brady says. “It was a personal challenge.”

She knew from previous attempts that tremendous physical and mental strength would be required. “I was certainly curious about how it would penetrate my body, mind, and soul,” O’Brady says. “I would be alone after a really intense two months there.”

He attempted cross-country skiing, sliding a 300-pound sled full of supplies, including a tent, stove and supplies. Throughout the trip, Rud was in O’Brady’s mind.

Although they shared a plane to Antarctica, their paths only crossed once during the actual race, on the sixth day. Rud’s place in O’Brady’s mind became apparent when he asked his wife in a telephone conversation, “Is Lou real?”

“It was so weird [question]”I’ve been out there for so long, I didn’t know if it was a hallucination … if I would put this guy in my brain.” By then O’Brady was getting cheeky and afraid of frostbite.

In the end, O’Brady solved Rud’s dilemma, deciding that his rival was “either a real or not a real but great motivator.”

O’Brady says this kind of motivation has been vital, starting from the first day he was desperate to pull his sled, and continues to help when everyone seems lost. He experiences such a moment, not long after his head at the bottom of the world. A fierce Antarctic wind almost pulled her tent into the ice void.

“Fortunately, I caught up with her and held on for dear life,” O’Brady says. “Antarctica is so unforgivable. You can have 40 or so good days in a row before you make a mistake. It would have ended the game. “

However, the game continued and in the end O’Brady ended two days ahead of Rudd on the ice shelf on Ross December 26, 2018.

“We have continued a friendship for which I am truly grateful,” says O’Brady, adding that of the seven billion people on the planet, Rud is the only one who knows what his trip was.

Since then, O’Brady has returned to Antarctica – to set another world record last December. He was part of a team of six in a rowing boat that navigated the Drake Passage from the southern tip of South America to Antarctica.

“It’s one of the most challenging and dangerous waterways in the world,” he says. “It’s a whole different journey.”

The Covid-19 pandemic has put an end to O’Brady’s adventures – he and Besaw have been scheduled for an expedition to Everest. O’Brady, meanwhile, uses his understanding of seclusion from his campaign in Antarctica.

“The lesson is that isolation can be a place where we can get to a deeper point of contact,” says O’Brady, “where we are not completely excluded from everyone.” He notes that even in Antarctica himself, he corresponded with students and answered their questions as part of a nonprofit that he and his wife had established.

“Loneliness certainly has scary, intense moments,” O’Brady says, but it has nonetheless been part of “important pieces in my life … I hope in the midst of the coronavirus crisis … some people may have a moment of reflection, and let’s hope something positive moves forward. “