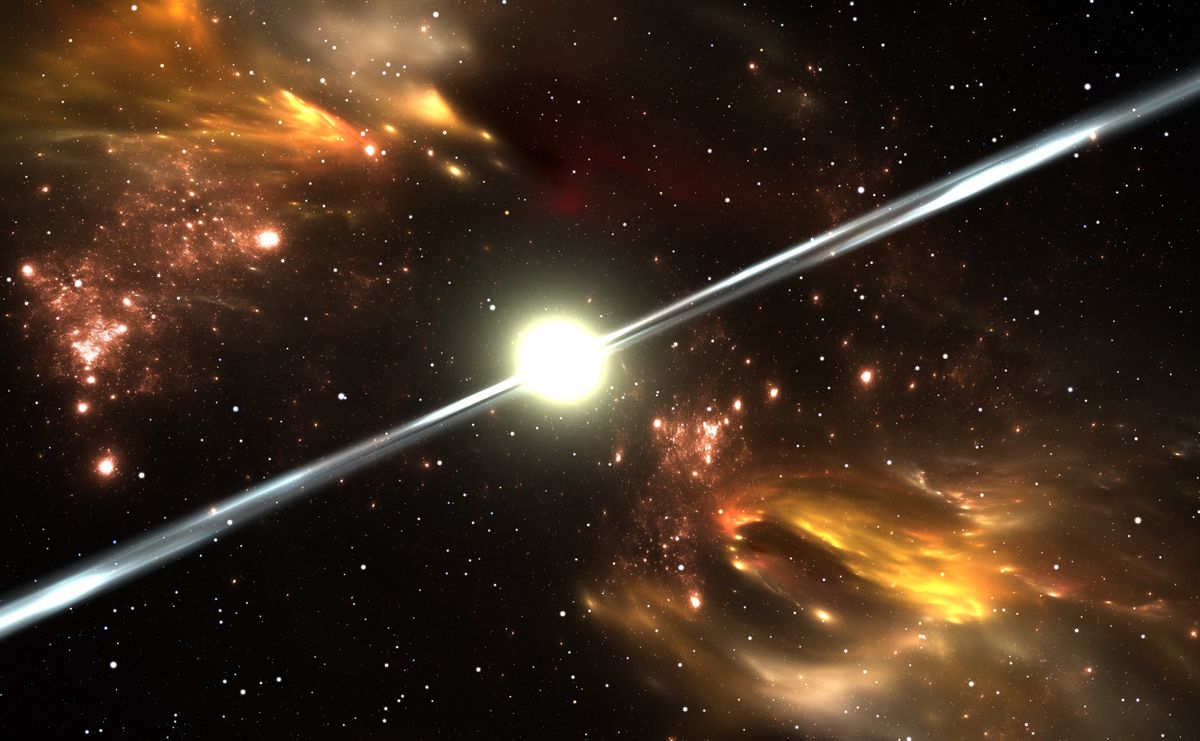 A neutron star that spins at an unimaginable rate of 707 times per second also shoots out powerful pulses of gamma rays into the universe.

The star is at least 4,400 light-years from Earth, though its exact distance is a mystery (more on that later). The celestial body is what is known as a pulsar a dense, rapidly spinning neutron star left behind by the collapse of a giant star. Pulsars have strong magnetic fields, and as they rotate, they spit out beams of radiation along their two magnetic poles. Much like a lighthouse beam, these streams can be seen by Earthlings only when pointing right at Earth, so pulsars appear to blink.

The newly discovered pulsar has the distinctively non-charismatic moniker PSR J0952-0607. The star was originally detected in 201

7 by the Fermi Gamma-ray Space Telescope, according to the Max Planck Institute for Gravitational Physics, but no gamma-ray bursts were initially detected. However, the radio telescope array Low-Frequency Array detected pulsating radio signals from the star, which allowed scientists to work out a few preliminary details: J0952-0607 is part of a binary-star pair, orbiting a common mass in 6.2 hours per orbit with a buddy star in the 50th the mass of the sun. The pulsar's rotation rate of 707 times per second makes it the second-fastest neutron star ever discovered. (The fastest, reported in the journal Science in 2006, rotates at 716 turns per second.)

"This search is extremely challenging because the Fermi gamma-ray telescope only registered the equivalent of about 200 gamma rays from the faint pulsar over the 8.5 years of observations," Nieder said in a statement. "During this time, the pulsar itself rotated 220 billion times. In other words, only once in a billion observations was a gamma ray observed!"

Related: The 12 Strangest Objects in the Universe

Fortunately, the researchers were able to detect these lucky missives, confirming that J0952-0607 really is a pulsar. But they discovered a whole new set of questions about the extreme neutron star .

The first surprise is that the Fermi gamma-ray telescope did not detect any gamma-ray pulsations from the neutron star prior to July 2011. Perhaps the pulsar's orbit changed so that its beams became visible to Earthlings; but Nieder and his colleagues could not find any record of orbital alterations. It's also possible that the amount of gamma rays being emitted from the pulsar changed, but the scientists can't test that idea given the already-subtle signal of the faraway star.

Another mystery: How far is the pulsar really? Optical telescope observations revealed that the pulsar's companion star is locked in a galactic dance with the rapidly spinning pulsar, with the same side of the star always facing its hyperactive companion. (The heat difference between the sides of the star – caused by this interaction – is detectable from Earth.) But while radio measurements suggest that the pulsar and its companion are 4,400 light-years away, optical measurements suggest that they are more like 13,200 light-years from Earth. It is unclear which is correct or why there is such a large difference between the measurements.

The distance matters: If the optical measurements are right, the pulsar's companion star likely fits into the expected density, at least based on the past measurements of the pulsar systems. If the radio measurements are closer to correct, the companion would be extremely dense, in a range never seen before in a pulsar companion.

Researchers are now collecting more Fermi gamma-ray observations to address this question. They published their findings on the new pulsar on Sept. 18 in The Astrophysical Journal .