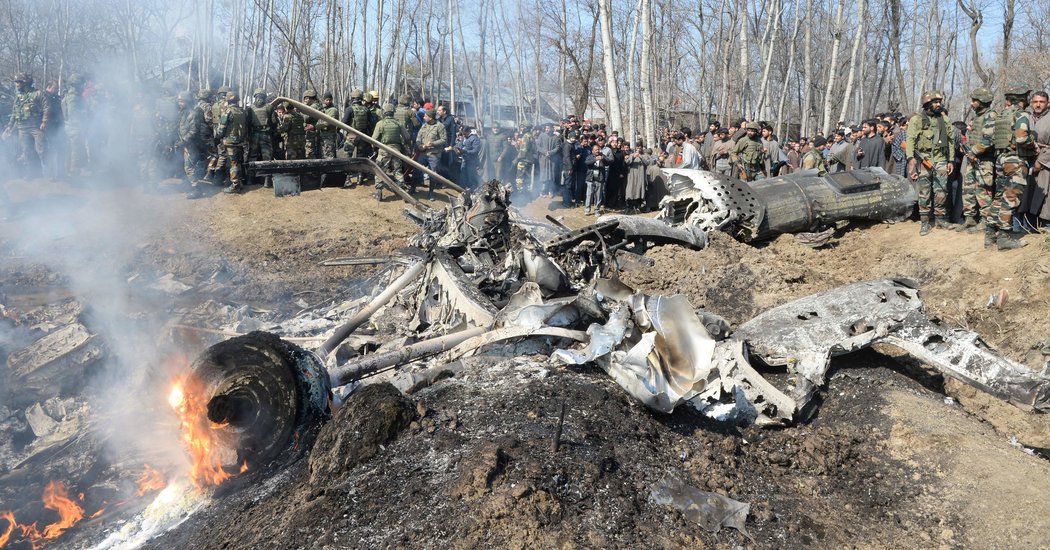 NEW DELHI – Pakistan's military said Wednesday that it shot down two Indian warplanes that had entered the Pakistani airspace, capturing two crew members, in an escalation of hostilities just after Indian fighter jets crossed the disputed Kashmir region to launch an airstrike within

Pakistan said that earlier on Wednesday, the military conducted its first airstrike against unspecified Indian targets as well, although it said no Pakistani aircraft crossed the border. . Earlier, Indian officials said that one of the country's fighter jets had crashed inside Indian-controlled Kashmir, with the cause being unclear.

There are fears that tensions between nuclear-armed neighbors could escalate after Prime Minister Imran Khan of Pakistan promised on Tuesday to retaliate for an incursion by Indian jets hours before. Those airstrikes were the first time since 1971 that the Indian Air Force had crossed the line of control, the de facto border between the Indian-and Pakistani-held areas of Kashmir, that strike inside Pakistan

Pakistan's chief military spokesman, Maj . Gen. Asif Ghafoor said in a news conference on Wednesday afternoon that Pakistan's air force had hit six targets inside India without crossing into the country's airspace. It was unclear what was struck; Major General Ghafoor described the strikes as being in an open area to ensure there was no human loss or collateral damage.

The Indian Air Force responded by entering the airspace of Pakistan, he added, and two planes were shot down.

"Our ground forces arrested two pilots; one of them was injured and has been shifted to C.M.H., and he will be taken care of. The other one is with us, "Major General Ghafoor said, using the initials for the Combined Military Hospital complex.

By Wednesday afternoon, the Indian government shut down the airspace over parts of the country's host military facilities, including Jammu , Srinagar, Amritsar, Leh and Dehradun, according to Rakesh Asthana, the General Director of the Civil Aviation and Security Bureau

Pakistan also shut down large parts of its airspace, including major airports, according to a notice issued by country's Civil Aviation Authority

Residents and officials of Budgam district, in Indian-controlled Kashmir, said one Indian plane crashed into an open field there at about 10:15 am local time.

"It was an Indian Air Force jet. "The jet is completely charred and we have recovered the dead body of the pilot," said Syed Sehrish Asgar, deputy commissioner of Budgam district.

Rashid Ahmad Mir, a resident of Budgam, said he heard a tough crash and looked out his window to find a smoke billowing out of a nearby field.

In the early hours of Tuesday morning, India's Air Force entered Pakistan to strike what the government claimed to be a training camp belonging to the militant group Jaish-e-Mohammed in Balakot, Khyber-Pakhtunkwha Province, resulting in "heavy casualties." But the Pakistani government and residents of the area reached by telephone said the strikes instead struck an open ravine resulting in minimal damage

Those strikes were in response to the Feb. 14 suicide bombings by Jaish-e-Mohammed on an Indian paramilitary convoy in Kashmir, which New Delhi vowed to respond to. The suicide bombing killed 40 Indian soldiers, the worst incident in Kashmir in three decades.

Jaish-e-Mohammed is classified as a terrorist group by the United Nations and blacklisted. Although the group is formally banned by Pakistan's government, American and Indian officials say it operates freely in the country, which Islamabad denies.

In an effort to diffuse tensions, Secretary of State Mike Pompeo called the Foreign Ministers of both India and Pakistan

"I expressed to both ministers that we encourage India and Pakistan to exercise restraint and avoid escalation at any cost. I also encouraged both ministers to prioritize direct communication and avoid further military activity, "according to a statement from Mr. Pompeo's office.

In Pakistan, Mr. Khan said he was meeting with various government bodies on Wednesday to formulate a response to India, including the National Command Authority, the body that oversees the deployment and management of nuclear arms.

The American government has typically played an important role diffusing tensions between India and Pakistan, shuttling between the two rivals in the past flare-ups. But President Trump has shrugged on Pakistan while drawing closer to India since coming to office in 2017.

Early last year, Mr. Trump cut some $ 1.3 billion in military assistance to Pakistan because of the country's support of terrorist groups. Pakistan's military denies those accusations