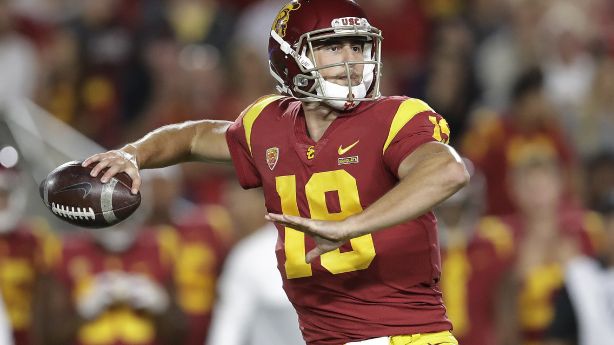 SALT LAKE CITY – Another year and yet another USC Trojans win over Utah in the Coliseum.

After the loss of BYU by BYU last Saturday, the Trojans (3-1, 2-0) responded on Friday with a 30-23 upset over visiting No. 10 Utah Utes (3-1, 0-1) in a chip race between the two programs. Both South Division programs have traded home wins for most of Utah's Pac-12 time, and Friday was no different.

The Utes never led the game but managed to make a one-point play to start the fourth quarter, but USC backup quarterback Matt Fink organized one last hit – a five-play, 69-yard drive that was limited by four yards rushing by Marquis Step – to seal victory for the Trojans.

USC struggled a lot of the night to establish a ground game against a tough Utah front block, but Fink made standout reels to his three star receivers, including an impressive performance from Michael Pitman, Jr., who finished with 232 yards and one tap of 1

0 catches to set the tone for the win.

Fink finished the night, throwing for 351 yards and three touchdowns on 21-of-30 passing to outscore a Utah man. most of the night. Utah tried to replace him in the second half, which worked mostly, but struggled to keep up throughout the game.

"I think we just went out and weren't ready, man," Utah Safety, said Julian Blackmon. "I feel like that's what we're practicing for, but we came out a little slow and they just kept going."

The backup quarterback threw a costly hook to Utre's Terrell Burgess, who returned it for 29 yards to set Utah with a first-quarter touchdown pass – a two-way pop pass from senior quarterback Tyler Huntley to the tight end of Cole Fotheringham.

The Trojans lost starting quarterback Kedon Slovis in the second game of the game after Utah's Leki Fotu caught him on the ground after receiving a pass to one of his receivers. Slovis lay on the ground before eventually being taken to the dressing room for the night.

Fink entered the game and immediately set the tone with a fast drive, which was limited by a pass of 29 yards to pass to Tyler Vaughns for the first score of the game. Fink, again, arranges a quick point shot in the next series, which was closed by throwing 31 yards to Ammon-Ra St. Brown after Utah's Devin Lloyd completely missed bringing Fink down with a sack.

Fink continued with points in the second half with a 78-yard bomb down to Michael Pitman for a break to give the Trojans an 11-point lead early in the third quarter.

Despite strong readings in the passing game, USC finished the night with only 13 rushing yards. For most of the night, USC was in the negative, including minus-15 yards rushing into halftime break. Utah Huntley was the most important offense in the loss, but spent much of the night in scandals as the Trojans continued to blow up his offensive front. Still, Huntley threw for 210 yards and a touchdown on 22 of 30.

The Utes got their first score of the night in a 17-yard rushing game by running back Devonta Henry-Cole after the Score of USC for detection. The Trojans got involved in the startup of Zack Moss and limited him to just 20 yards before leaving the game with an apparent shoulder injury.

Henry-Cole and Devin Broomfield took the lion's share of the carries by the end of the game and operated 247 net rushing yards overnight. The pair combined for 94 yards and one touchdown.

Utah ended the night with a blocked goal attempt – a 41-yard Yard attempt in the first quarter – and a 5-yard pass to USC before halftime, Utah was 2-yard line at USC, but Broomfield killed the ball and the Trojans recovered.

Both teams battled discipline at night and combined for 27 penalties for 237 yards. Utah finished with 16 shots for 120 yards, most of which came from talking and a few unsportsmanlike conduct calls, including one from Whittingham for a dispute with the ref.

"You have to play cleaner in this, and that was certainly a huge (loss) factor," Whittingham said. “We need to be better there.”