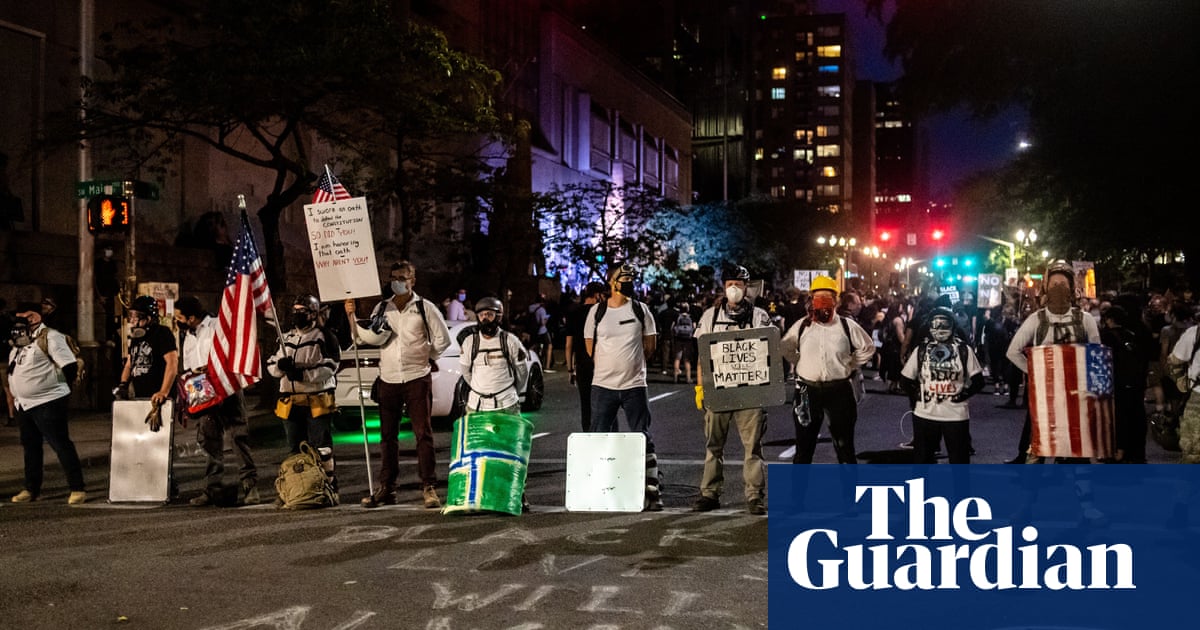 The withdrawal of federal agents from the frontline police at demonstrations in downtown Portland significantly reduced tensions in the city overnight.

Protesters in support of the Black Lives Matter gathered again near the federal courthouse, which became lightning, and the scene of night battles amid a whirlwind of tear gas after Donald Trump sent agents to put an end to what he called anarchy in the city after weeks of demonstrations,

But in the absence of federal officials, the protest on Thursday night passed without much incident or police intervention.

On Wednesday, Oregon Governor Kate Brown agreed with the White House that state police would take responsibility for guarding the courthouse after weeks of escalating protests. She said Trump’s troops were behaving like an occupation army in Portland and provoking riots with heavy-handed tactics.

In contrast, the state military did not intervene, even as the scale of Thursday night’s protest crossed the line, as protesters shook the fence around the courthouse, where in early demonstrations federal agents generally fired tear gas, stunning grenades and ammunition. . ,,

In the absence of confrontation and the state police remain largely unseen inside the courthouse, tensions quickly ease. Without the attention of federal forces, protest organizers kept the focus on Black Lives Matters and Portland police reform.

Some of the crowd worked to avoid trouble, stopping protesters from setting fires and firing fireworks in the courthouse, as they had done the night before.
Dan Thomas, an African-American, stood in the street urging people not to confront the state police.

“The attack on the federal building is not the Black Lives Matter. Leave it. You play in Trump’s hands, “he said.

One woman shouted, “Stupid white people only here for their own reasons.”

Despite worries from many in the crowd that the Trump administration would not comply with the agreement to withdraw federal officers, no one was seen on the street.
Trump tweeted that the agents would remain in Portland until Brown brought control of the protests led by “anarchists and agitators.”

“If she can’t do it, the federal government will do it for her. We will not leave until there is no safety! “Trump wrote.

Brown and Portland Mayor Ted Wheeler said state and city police forces would seek to de-escalate the protests, not confront the protesters.

Wheeler said city police, U.S. troops and the county sheriff’s office have agreed not to use tear gas unless there is a threat to life or serious injury.
“Federal officials use CS gas widely, indiscriminately and at night,” he said. “That’s why it escalates the behavior we see on the street, instead of de-escalating it, and that’s why it has to end.”

Wheeler apologized to Portland police for using tear gas in late May and June to crack down on Black Lives Matter protests.

“This should never happen,” he said.

Earlier in the day, Portland police cleared the two parks in front of the courthouse and county jail, which served as a protest site. Officers then sealed the parks and marked them closed. But this seemed strangely provocative and difficult to implement.

When several protesters removed the yellow police tape and began chanting, “Whose park? Whose park?” Our park? Portland City officials quietly left the park and were not seen again until the end of the evening.