Protests in Hong Kong end clashes between police and protesters 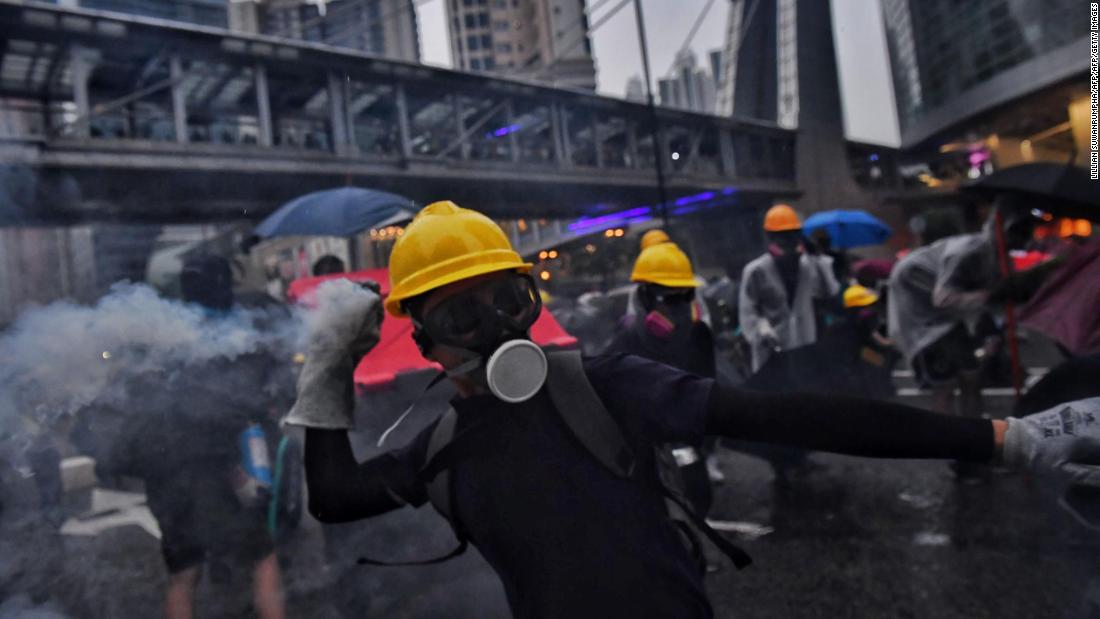 Violence escalated late Sunday night as a smaller group of protesters broke away from the main march of the day and continued on a lengthy march that was not approved. They used traffic cones and street railings to build makeshift barricades on the street, and threw brick and gas bombs.

The police deployed tear gas in the group but failed to disperse them and later used a water cannon against a makeshift barricade. This is the first time water cannons have been used to protest in the last three months, a Hong Kong police spokesman told CNN.

Earlier on Sunday, pro-democracy protests were largely peaceful, with thousands of protesters moving from Kuwait Chung to the Tsun Wang neighborhood, in new areas of the city. They showed up despite the continuing thunderstorm, dressed in plastic ponchos and raincoats, tucked away under umbrellas. According to the organizers of the Telegram messaging platform, the march aimed at reiterating the main demands of the protesters, as well as expressing opposition to the alleged police brutality.

2th weekend of successive protests marks the end of a brief calm that pervades the city. After tear gas was fired over the weekend in July, last weekend was a peaceful march – for the first time in weeks without tear gas. The calm continued throughout the week, with protesters peacefully creating a human chain across the city on Friday – the 30th anniversary of the human chain on the Baltic Road.

They called the doctrine of tactics "a kind of psychological warfare" and stated that they had arrested 16 people on suspicion of disclosing personal data without consent and causing harm and unauthorized access to a computer.

Many in the city are involved with the Hong Kong police and government, and some supporters of the police held a rally Sunday. calling for a communication platform between the police and the public "to repair the broken link" and to ask the police to act "with malice or ill will towards anyone", according to a Facebook post.
This escalating violence peaked in July with numerous meetings between protesters and the police and multiple injuries. The protests continually taxed everyone involved – on Saturday, Lam had posted a lengthy statement on Facebook calling for peace and dialogue.

"After more than two months, everyone is tired. Can we sit down and talk about it? "She said, acknowledging that there were deep societal issues beyond the immediate violence that needed to be addressed.

Hong Kong has been protesting for nearly three months, all started in June, triggered by a controversial bill that would allow extradition to mainland China. the bill was suspended, the demands of the protesters evolved Demands include Lam's resignation, full bill withdrawal and universal suffrage.

Lam condemned the violence and promised greater communication with the public, but many believe it is not enough and several protesters say CNN that they will continue to demonstrate as Lam responds to their requests.