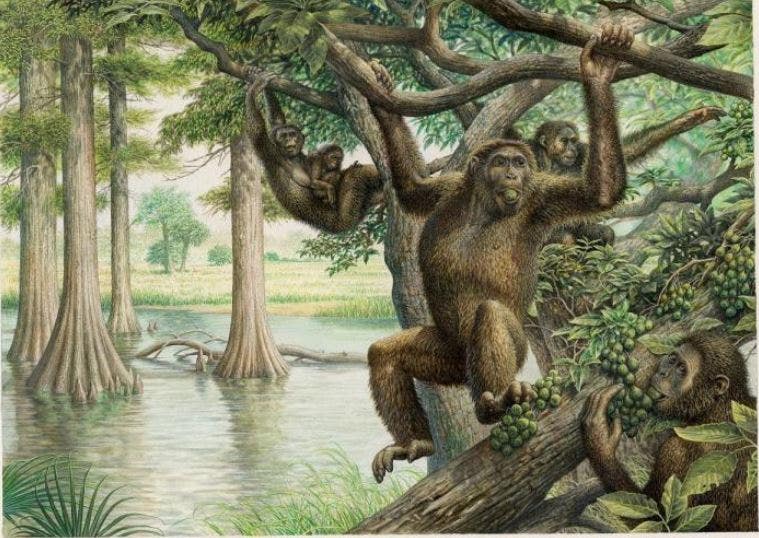 The skeleton of monkeys, known as Rudapitek, was originally discovered in Hungary; The preserved pelvis has been examined by an international team of researchers who finds that human bipedalism – a two-legged locomotion – may have a deeper origin than ancestors than previously thought.

"Rudapitheck was quite monkey-like and probably moved among the branches like monkeys now – keeping her body upright and rising with her arms," ​​Carol Ward, curator honors professor of pathology and anatomical sciences at MU Medical School and lead author of the study just published, said in a statement.

"However, he would be different from the modern-day great apes with a more flexible lower back, which would mean that when Rudapitec came down to earth he might have the ability to stand This evidence supports the idea that instead of asking why human ancestors rose to fours, we might have to ask why our ancestors never descended to fours. "

Modern African monkeys usually have long pelvis and short lower back, t because they are so big animals, this is one of the reasons they usually go on fours when they are on the ground.

However, people have longer, flexible lower backs, which allows them to stand up and walk easily on two legs.

Ward explained that if humans evolved from building the body of African monkeys, significant changes would be needed to extend the lower back and shorten the pelvis.

Digging pelvis from Rudapithecus. The pelvis is among the most informative bones of the skeleton, but one that is rarely preserved.
(Carol Ward)

But if people developed from a predecessor, more like Rudapithecus, this transition would be much more straightforward.

The study was published Tuesday in the journal of human evolution.