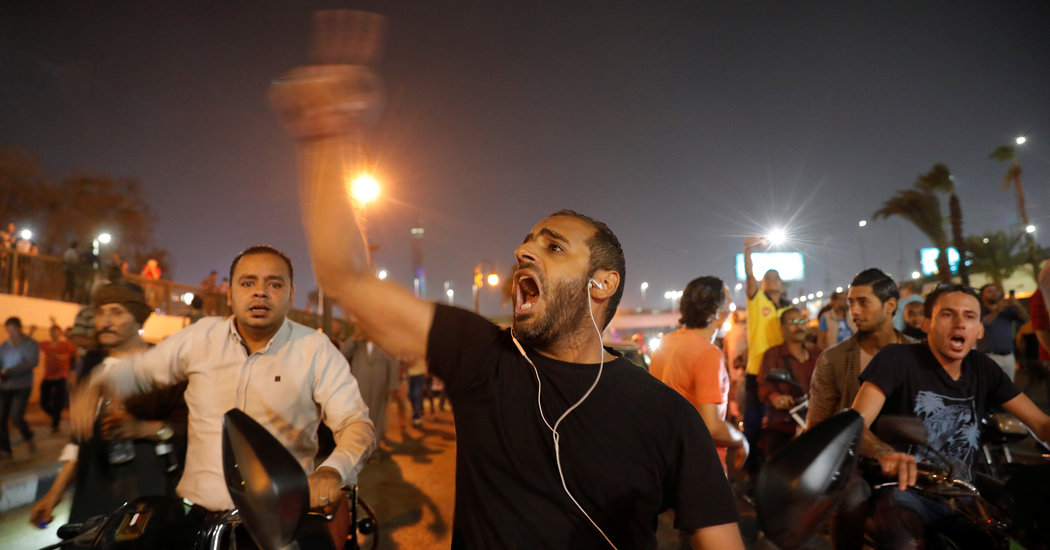 The protests, albeit small, happened when Mr El-Sissy flew to New York to attend the United Nations General Assembly next week – and they were unusual for holding them.

Mr. El-Sisi, who came to power during the 2013 military takeover, strengthened his power through severe repression that stifled critics, restricted free speech, and put an end to any semblance of democratic politics. Even the boldest dissent is met with harsh punishments and lengthy prison sentences.

On Friday, police fired tear gas to disperse some groups, but other protesters continued to clash with police in the early hours of Saturday.

At least four people were arrested near Tahrir Square, where Egyptians gathered to oust President Hosni Mubarak during the 2011 Arab Spring, said the Egyptian Commission on Rights and Freedoms, which monitors the status of detainees.

Human rights groups regularly denounce Mr. El Sisi as one of the harshest leaders in the Middle East. The packed prisons are full of political detention, hundreds of websites are blocked, and the country's press is largely subordinated to the security services.

Still, Mr El-Sissi has met with little resistance from Western allies, including President Trump, who last week called him " my favorite dictator."

Friday's protests were prompted by a call by Mohammed Ali, a builder who worked with the military and appeared in video clips on Facebook alleging widespread public scattering by Mr El-Sissi and his close aides.

In a recent video recorded by Mr Ali of Spain, where he lives in self-imposed exile, he called on Defense Minister Mohammed Zaki to arrest Mr el-Sisi. He called on the Egyptians to take to the streets and demand the president's release on Friday.

Hundreds of young Cairo residents took that call and flooded the streets Friday night after a football match between two popular Egyptian teams. Witnesses and videos suggested that the protests were not centrally organized, but instead emerged from spontaneous gatherings of angry young people, many of working-class origin, chanting anti-tide slogans.

In one place, protesters denounced Mr el-Sisi as "the thief".

Government television stations tried to reduce unrest. Coming from Tahrir Square, an anchor said a small group had gathered to take selfies before leaving the scene. Other channels insist the situation is calm.

But videos posted online show that limited protests have erupted in the second city of Egypt, Alexandria, the Suez of the Red Sea and the Mahala el-Kubra, a textile factory town 70 miles north of Cairo, which is known for his work activity.

Limited protests against Sisi occurred in Cairo in 2016 after the President ceded two islands in the Red Sea, Tirana and Sanafir, to Saudi Arabia. But since then, life has become much more difficult for ordinary Egyptians.

Food prices rose after Mr El-Sissi introduced a rigorous diet, reducing fuel subsidies and certain food products, as part of a rescue package from the International Monetary Fund, which he undertook to decide currency crash in 2016

The official statistics agency of Egypt reported in July that 33 percent of Egyptians live below the poverty line after years of austerity, compared to 28 percent in 2015 and 17 percent in 2000 [19659002] n. el-Sisi was re-elected president in 2018 after a wrong vote in which he did not face serious opposition. A referendum on constitutional changes was adopted this year to expand its governance. But at least three million Egyptians have voted against the measure.

Previously, Egypt's security services responded to much smaller protests, intensifying repression, usually in the form of mass arrests, which saw critics be imprisoned for months or years. Analysts expect a similar reaction to the protests on Friday.

However, some argue that it seems that Mr El-Sissi has turned a corner, however small it may be. al-Mahdi, a political scientist at the American University in Cairo. The police's relatively restrained response "may be a decision to steam," she said. "This was typical of the Mubarak regime. But this is not typical of Sisi. ”