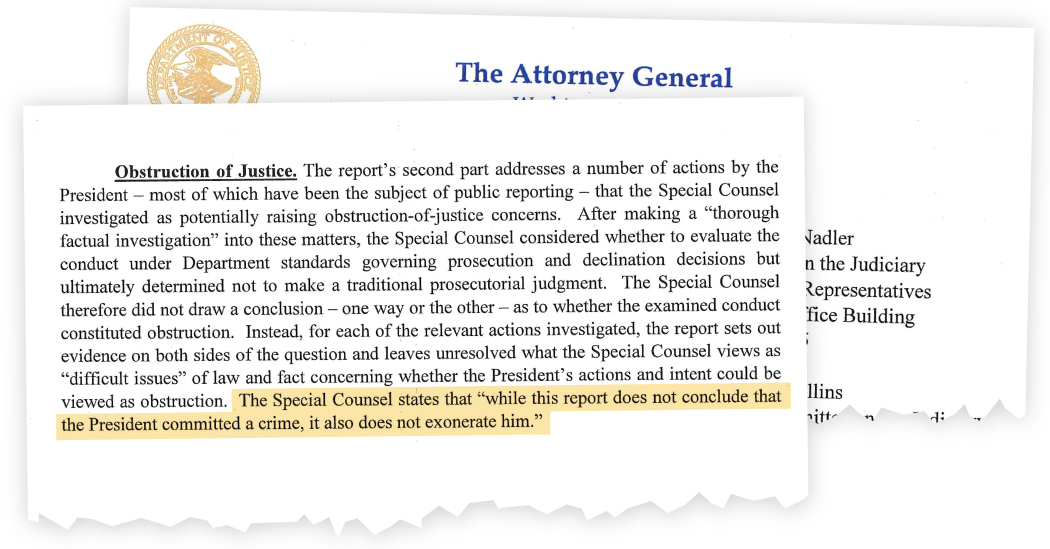 The second part of the report looks at a number of actions by the President, most of which have been the subject of public reporting, which the Special Adviser has investigated as potentially increasing impediments to justice. After conducting an "in-depth factual investigation" on these issues, the Special Adviser will assess whether to assess the conduct of the Unit's rules on criminal prosecution and declination, but ultimately decides not to make a traditional prosecutorial decision. That is why the Special Advocate did not conclude, anyway, whether the conduct under review is an obstacle. Instead, for each of the investigated actions concerned, the report contains evidence from both sides of the issue and leaves unresolved the issues that the Special Adviser is "difficult" questions of the law and a fact regarding whether the actions and intentions of the president can be considered as a hindrance, the Special Advocate states that "although this report does not lead to the conclusion that the president has committed a crime, he does not release him either."

The Special Lawyer's decision to describe the facts of his investigation was to reach legal conclusions, leaves the Chief Prosecutor to determine whether the behavior described in the report is a crime. In the course of the investigation, the Special Advocate's Office held talks with some department officials on many of the legal and factual issues dealt with in investigating the Special Advisor's impediment. After reviewing the Special Adviser's final report on these issues; consulting with department officials, including the Legal Advice Bureau; and by applying the principles of the Federal Prosecutor's Office guiding our indictments, Deputy Prosecutor Rod Rosenstein, and I concluded that the evidence developed during the Special Advocate's investigation is not sufficient to establish that the President committed an offense Of justice. Our determination was made without regard to the constitutional considerations surrounding the indictment and the prosecution of the president-in-office, and not based on them. 2

In making this decision, we noted that the Special Advisor admitted that "the evidence does not indicate that the president was involved in a major crime involving Russian electoral intervention," and that, although not is decisive, the lack of such evidence is related to the president's intention with regard to obstruction. to obtain and maintain a verdict of impediment, the government will have to prove beyond reasonable doubt that a person acting with a corrupt intent participates in obstructive behavior with sufficient relation to pending or planned proceedings. the report identifies no action that we think constitutes obstructive behavior, has an Expected or planned relationship, and is done with corrupt intentions, each of which, in accordance with the principles of the federal prosecuting authority for decision-making in the ministry, will have to be proven beyond reasonable doubt to establish a violation of justice impeding justice. Department Status Review