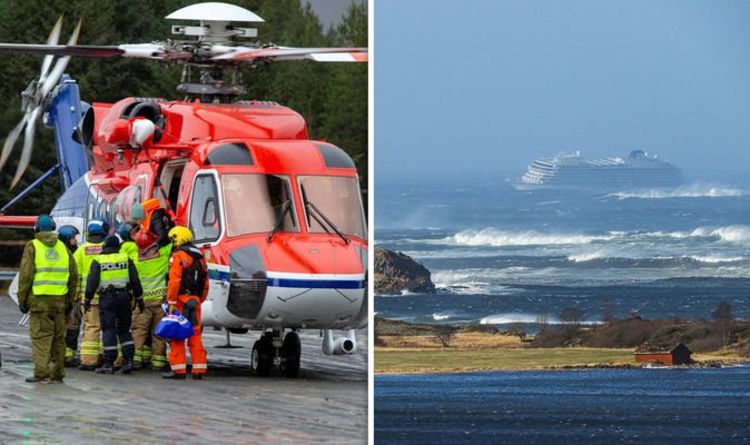 The Viking Sky cruise ship suffered an engine failure in windy weather near the Norwegian west coast on Saturday. The ship had 1,373 passengers aboard and on Sunday 463 people were safely transported in air to land on five helicopters. The ship has suffered engine problems and sent one day around 13:00 GMT on Saturday near Hustadvika in More og Romsdal.

Police have already said that the first 463 passengers were evacuated successfully, with 17 being sent to the hospital, three of them seriously injured.

The evacuation process began at 3:00 pm on Saturday. Flussund, the captain of the Remøy trawler, who is in the area, said he thought it could take about four hours to reach the Viking Sky to the Norwegian town of Molde.

The ship will reach the ground around 1

Mr Flusend told Norwegian NRK television: "Now the weather has settled in the area. Waves are currently about four to five meters high, and the weather is expected to improve over the course of the day. "

The ship carried 915 passengers, of which" a large number "was from the United States and the United Kingdom, According to Rescue Services

According to local rescue coordination, about 17 injured passengers were taken to hospital while others were lightly cut and bruises.

Mr. Lange said, "The ship could get a little farther from the land and go northwest at a slow pace."

One of the passengers said, "We were at lunch when it started The windows were broken and the water was coming in. It was just chaos." The trip with the helicopter, I would rather forget. Sky Viking, built in 2017, belongs to Viking Ocean Cruises, part of the Viking Cruises group, founded by the Norwegian billionaire Torsten Hagen. According to the company's website, its passenger capacity is 930.

A number of people have gathered to follow the dramatic rescue in Hustava. 19659003] The Norwegian People's Aid also confirmed that she had been summoned to support the evacuation.

Operational manager Rouen Töven told the Norwegian paper VG on Saturday: "N we are on our way with a crew of 15 people

Tor Andre Franck in the Møre og Romsdal police district said the ship had suffered engine damage and had trouble driving, saying: "The wind is blowing with 38 knots (43.7 km / h) in the area We created facilities on the ground for the evacuees. "

Mr Frank said the ship was" stuck "and added that the weather in the area was very bad.

Gunnar Holten, a local man in Hustava, the area near where the ship is off, says the turbulent conditions are very bad.

According to Mr. Holton, flying debris can be seen in the air, and a roof from a barn near by is ripped off by the strong winds.

This story is constantly updated with new information.