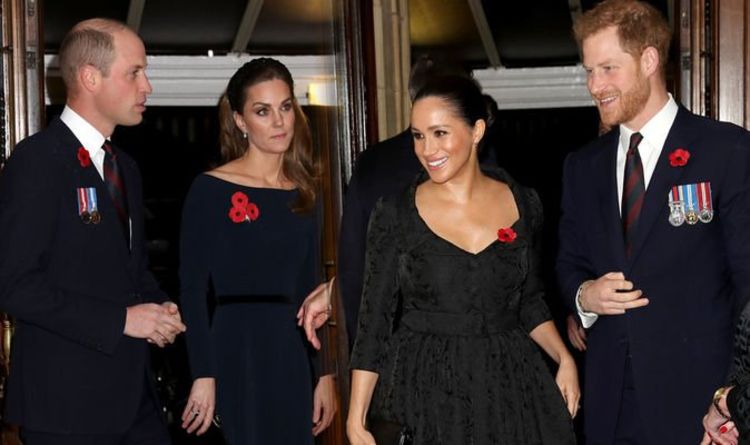 The Royal Family gathers in large numbers on Saturday night for its first public event, totaling after the Unification of Color in June.

The annual Royal Legion of Remembrance at the Royal Albert Hall this year marks the 75th anniversary of several decisive battles. since 1944: Monte Cassino, Kohima and Imphal and D-Day with particular emphasis on the role of the Community and Allied Forces.

Saturday's event also commemorates the 100th anniversary of the Government Communications Staff and pays tribute to RFA Mounts Bay, which delivered supplies and assistance to the Bahamas following the devastating impact of Hurricane Dorian this year.

READ MORE: Megan Markle: Duke and Duchess of Sussex Arrive for Commemoration in the evening.

In fact, the Sussex couple were separated from the Royal Family by Prime Minister Boris Johnson and his girlfriend Carrie Symonds.

Prince Charles and Camilla, Duchess of Cornwall, were seated by the Queen to the left and by the Duke and Duchess of

Princess Anne, Prince Edward and Sophie, Countess of Wessex, Birgita, Duchess of Gloucester and Gloucester around the queen.

But the parents of recently six-month-old baby Archie Harrison of Mountbatton-Windsor were not in the same neighborhood as the rest of the Royal Family. Instead, it looks like the couple was sitting to the side and farther from the front positions in the front row of Kate, William, Charles and Camilla.

Last year, the royal couples sat in the same area of ​​the royal box, but were on opposite sides of the queen.

However, this year, the royal couples are in completely separate rows from the designated area of ​​the queen, potentially showing the extent to which tensions have arisen between the Royal Family and Megan and Harry.

Although, it is possible that couples may have simply followed a seating plan that decided their seats ahead of time without their input.

DO NOT THINK:
How did Harry and William's feud begin? [INSIGHT]
Prince Harry ignites a new feud with his father [PICTURES]
Kate Middleton "ignores" over "more interesting" mom [COMMENT]

It is believed that the Duke of Cambridge did not watch the ITV documentary before its broadcast and was actually "left" "For his brother after the documentary.

Speaking to him about Tom Bradby's anchor, Harry said, "Part of this role and part of this job and this family is under pressure that it's inevitable, you know, things are happening.

"But look, we are brothers. We will always be brothers.

"You know, we don't see each other as much as we used to because we're so busy.

"But I love it dearly and, you know, most of it is created out of nothing.

"Just like I said, as brothers, you know, you have good days, you have bad days."

On Sunday, the Royal Family is expected to attend the annual service and wreath laying at the Senotaph.

The queen has traditionally been joined by high grand for the moving event, during which wreaths are placed at the memorial.

This year, the 93-year-old queen will be watching the service from the Foreign Office and Association's balcony and will probably be joined by Prince Charles, Camilla, Prince William, Kate, Prince Harry and Megan Markle.

The Georgian film “Home” cleans the festival in San Sebastian