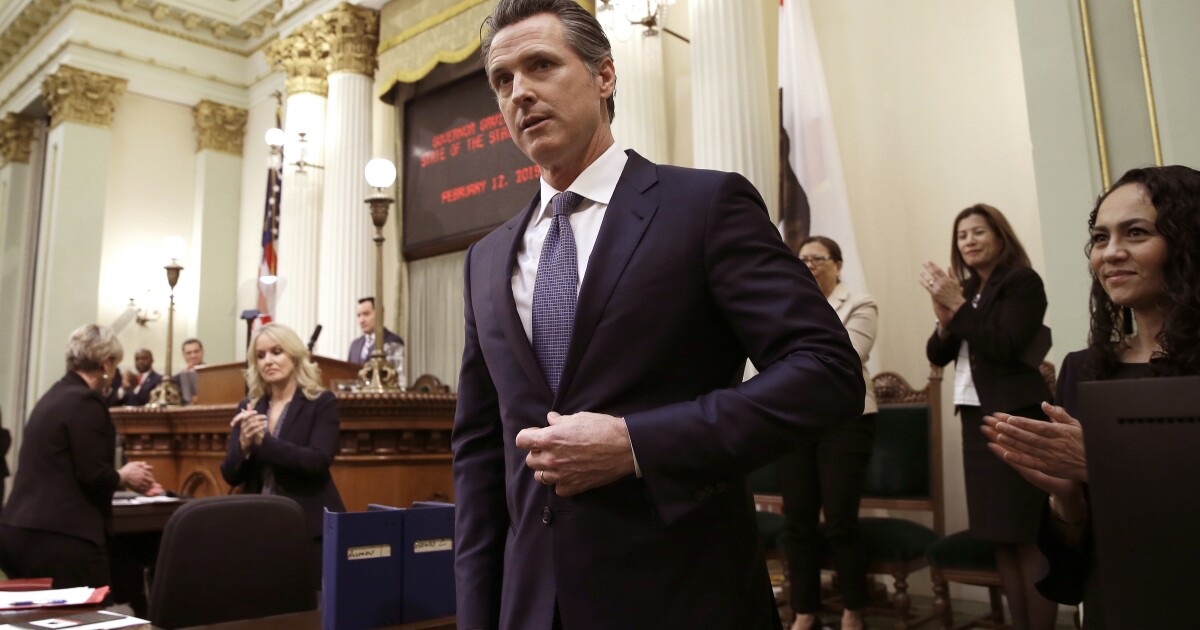 about. Gavin Newsom vetoed a bill Friday that would allow California to maintain endangered species from the Obama era and restrictions on pumping water for the Sacramento-San Joaquin Delta if dismantled by the Trump administration, despised by environmental groups who have been among the governor's most important political allies.

Newsom, which announced its intention to veto Senate Bill 1 after being approved by the Legislature earlier this month, expressed little concern about the rupture with environmentalists over legislation it rejected. as a "solution to the problem."

"I have spent 52 years of my life as an environmental leader and champion and will take the back seat to no one in my advocacy," says Newsom

Cassie Siegel, director of the Center for Climate Law for biodiversity, California said environmental leaders are still "hoping for great things" from Newsom, but its decision to veto SB 1

"Newsom capitulates Trump's relatives and corporate interests and throws endangered species and Californians under the bus," she said.

Siegel noted that earlier this week the Atty condition. Gen. Xavier Bessera joined with 16 other states to bring a case against the Trump administration for weakening the Endangered Species Act.

"This is the political courage we need for California," said Siegel.

Newsom attended events at the UN Climate Summit in New York this week, where he touched on California's environmental performance and declared himself "utterly humiliated" by President Trump's refusal to recognize the established science of climate change.

Kathryn Phillips, director of the Sierra Club California, rejected the idea that she had a big break with Newsom but did not spare her criticism because of his veto.

She said that she believed Newsom was dependent on arguments made by opponents of the bill, including powerful public water agencies, that the legislation would reduce their water supply from the Sacramento-San Joaquin Delta and derail negotiations for the enhanced threatened special cies defenses. The Delta provides water to more than 25 million people and millions of acres of agricultural land in the Central Valley.

"What it has done reveals some of the key challenges that we will face as we move forward in the next 3 years," Phillips said of the manager. "This is a pretty stubborn person we're dealing with, and when he digs his heels, he won't be persuaded by the facts."

In its veto message, Newsom stated that California is "a leader in the fight for resource, environmental and worker protection," adding that since Trump took office, the state has been aggressively fighting any attempt by the presidential administration to overturn those protections.

Newsom claims that the bill is unnecessary and that its administration effectively challenges Trump's policies in court and through administrative action.

"While I disagree on the effectiveness and necessity of Senate Bill 1, I expect to work with the Legislature in our shared fight against the weakening of

Atkins said on Friday evening that she was disappointed with the veto and would continue to press to protect the environment and working Californians. "

" Federal power continues to push back regulations as climate change impacts, "she tweeted." I will continue to work with my colleagues and the governor to squeeze whenever possible. "

The bill added fuel to the continuing this clash between water users – mainly Central Valley farms and cities in southern California – and conservationists over efforts to protect the delta, Chinook salmon trout and steelhead in the delta by limiting the amount of water that can be carried away by habitats them.

The biggest delay in negotiating the bill was a provision requiring the protection of endangered species by the state and limiting pumping to the Central Valley Project, a water system operated by the federal Bureau of Reclamation that provides much of water consumed by farms and people in the Central Valley.

Watersheds receiving water from the Central Valley project are threatening to move away from voluntary agreements negotiated between them and state regulatory agencies. The pacts, which Newsom strongly supports, aim to provide greater flexibility in how to protect endangered species and divert water from the delta.

The influential metropolitan water district of Southern California also opposed the bill. Leaders of the agency, which provides water to tens of millions of Southern California residents, fear they may be forced to reduce their water supply from the delta, which is sent south through a separate state water system.

Water agencies also claim that the bill would have been enshrined in outdated federal rules governing the pumping of water and the protection of species in the delta. As a result, they said that new scientific breakthroughs that offer recipes for best practices in water and species management would be ignored.

Newsom agreed with these criticisms and pledged to veto the bill only hours after it passed the legislation on September 14.

Shortly after Newsom declared it would veto the bill, President and CEO of Western Producers Tom Nasif praised the decision, saying that thousands of family farmers would benefit.

"Our farmers strive to be good stewards of the environment and our natural resources, and we support a balanced approach to water sustainability that relies on the best science available," he said in a statement.

After taking office, Trump insisted that he deliver more delta water to farms in the Central Valley, regardless of the effects on endangered species.

Westlands Water District, the San Joaquin Valley Irrigation Area, led by some of the state's richest producers, will be one of the largest beneficiaries of the Tr ump proposal to allow more water to be drawn from the delta.

Prior to joining the Trump administration, US Secretary of the Interior David Bernhardt was a partner at a law firm and lobby firm representing Westlands, and he filed a lawsuit against the Home Office four times on behalf of the county.

Newsom is a frequent critic of Trump's environmental policies.

And in August, California and a coalition of 21 other states filed a motion to block the Trump administration's attempt to remove restrictions on coal-fired power plants, boundaries that were central to President Obama's climate change policy.