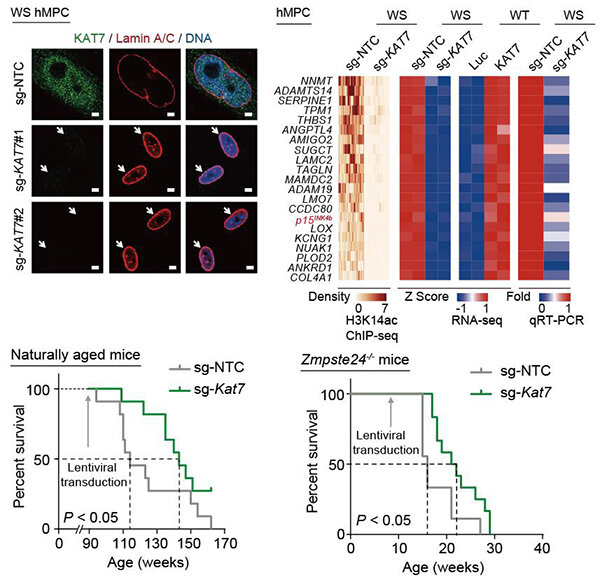 Cellular aging, a state of permanent cessation of growth, is emerging as a hallmark and a major driver of aging. It is regulated by both genetic and epigenetic factors. Despite several previously reported genes related to aging, the identity and role of additional genes involved in the regulation of human cellular aging remains to be elucidated. However, there is no systematic investigation into the interference of these genes in the treatment of aging and aging-related diseases.

How many genes to promote aging are there in the human genome? What are the molecular mechanisms by which these genes regulate aging? Can gene therapy alleviate individual aging? Recently, researchers from the Chinese Academy of Sciences have shed new light on the regulation of aging.

Recently, researchers from the Institute of Zoology of the Chinese Academy of Sciences (CAS), Peking University and the Beijing Institute of Genomics have collaborated to identify new genes that promote human aging using the CRISPR / Cas9 screening system for the entire genome and provide a new therapeutic approach to the treatment of aging and age-related pathologies.

00 genes that stimulate aging. In addition, they tested the effectiveness of inactivating each of the 50 candidate genes to promote cell rejuvenation. using target sgRNAs.

Among them, KAT7, encoding histone acetyltransferase, has been identified as one of the best targets for alleviating cellular aging. It is increased in human mesenchymal progenitor cells during physiological and pathological aging. Depletion of KAT7 weakens cellular aging, while overexpression of KAT7 accelerates cellular aging.

These results suggest that gene therapy based on single-factor inactivation may be sufficient to prolong the life of the mouse. The researchers also found that treatment with a lentiviral vector encoding Cas9 / sg-KAT7 or KAT7 inhibitor WM-3835 facilitated the aging of human hepatocytes and reduced SASP gene expression, suggesting the possibility of these interventions in clinical settings.

Overall, this study successfully expanded the list of genes that promote human aging using the entire CRISPR / Cas9 genome screen and conceptually demonstrated that gene therapy based on inactivation of a single factor is able to slow individual aging. This study not only deepens our understanding of the mechanism of aging, but also provides new potential targets for aging interventions.

The study, entitled “Genome-based CRISPR screen identifies KAT7 as a driver of cellular aging,” was published online in Science Translational Medicine on January 6, 2021.

Provided by the Chinese Academy of Sciences

Quote: Scientists are developing a new strategy for gene therapy to slow aging (2021, January 8), downloaded on January 9, 2021 from https://medicalxpress.com/news/2021-01-scientists-gene-therapy-strategy -aging.html

Video: Pedro Burns competes with a solar eclipse in “Ride into Darkness”