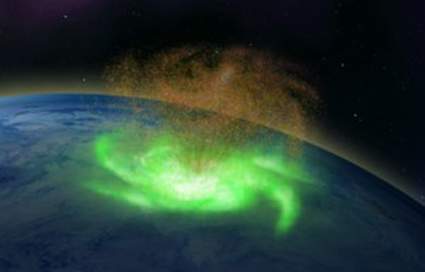 Scientists suspect that space conditions may create storm-like conditions over Earth for some time, but there is now photographic evidence of what researchers call a plasma space hurricane.

The authors of a new report published this week called Nature Communications they say they have the first sightings of a swirling plasma mass over the North Pole resembling a hurricane.

Using satellite imagery in 2014, teams from the University of Reading and Shandong University were able to create a 3D image of a 1

000 km mass that rains on electrons instead of water. Cosmic storms over the Earth are created when the solar wind from the sun enters the Earth’s atmosphere.

“Tropical storms involve huge amounts of energy and these space hurricanes must be created by an unusually large and rapid transfer of solar wind energy and charged particles to the Earth’s upper layers,” said Professor Mike Lockwood, a space scientist at the University of Reading. news release.

Lockwood and his team believe that these cosmic hurricanes can be created outside our solar system.

“Plasma and magnetic fields in the planets’ atmosphere exist throughout the universe, so the findings suggest that space hurricanes must be widespread,” Lockwood said.

What makes this new discovery so special is that hurricanes have also been observed in the lower atmospheres of Mars, Jupiter and Saturn, but the existence of cosmic hurricanes in the upper atmosphere of the planets has not been discovered before.

Hurricanes occur in the Earth’s oceans above warm bodies of water. When warm, humid air rises, it creates a low-pressure area near the surface that sucks in ambient air, causing extremely strong winds and creating clouds that lead to the hurricane conditions we are used to.

But in the upper atmosphere, the solar wind is responsible for creating cosmic hurricanes.

The solar wind is a stream of charged particles that emanate from the corona or solar atmosphere. Particles travel in all directions and interact with everything they encounter, even the Earth. Fortunately, our planet has a shield, the magnetosphere. If it weren’t for this magnetic field, the Earth would have big problems. Instead, most of the solar wind deflects safely and continues its journey into space. If there was no magnetic field, the harmful radiation carried by the solar wind would come to the surface, threatening life.

Some of the particles that do not deviate into space are led to the North and South Poles. These particles then interact with gases in our atmosphere, causing these gases to move to a higher energy state, producing vital light displays or Auroras, also known as the Northern Lights or Southern Lights.

The aurora oval is the imprint in the atmosphere of the boundary between the strongly stretched field lines of the polar cap and the more normal field lines in the lower latitudes. When the solar wind is strong, this limit approaches the equator.

The aurora oval usually adheres to the poles, but cosmic hurricanes appear even closer to the pole.