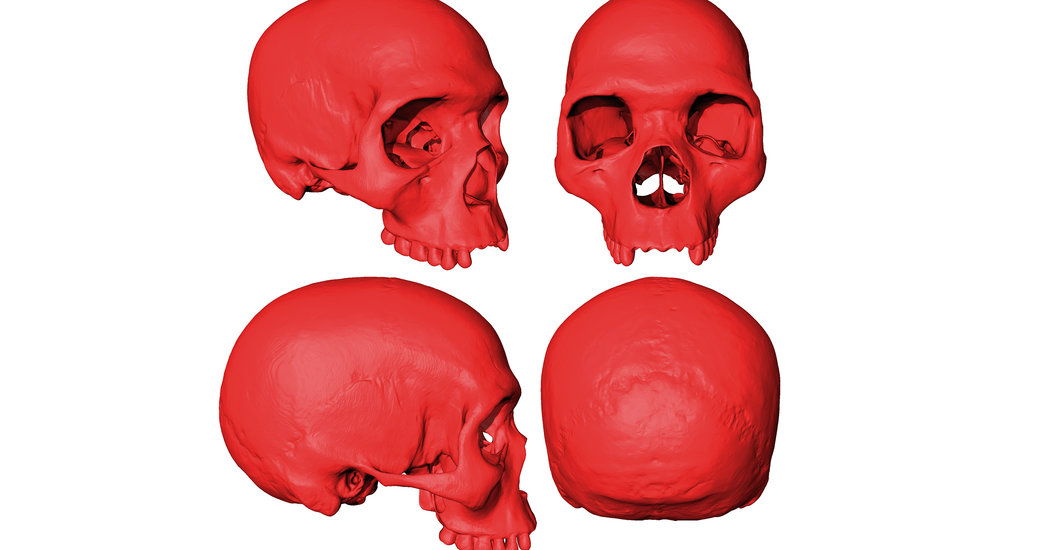 A new fossil may change the way we think about human origin, but its discovery – deep in a cave or buried in a rock – remains a striking struggle for paleoanthropologists who own a hammer.

"It can take years and luck to find the right one," says Aurelien Muniet, a paleoanthropologist at the French National Museum of Natural History. On Tuesday, Dr. Munier and Martha Mirasson Lar, a paleoanthropologist at the University of Cambridge in the United Kingdom, unveiled a virtual skull belonging to the last common ancestor of all modern humans who lived in Africa about 300,000 years ago. Alone

The representation of this ancestral skull, described in the journal Nature Research, is strikingly similar to the fossils of about the same age found in East Africa and South Africa. Scientists suggest that modern humanity originated by pooling populations in these two "

" We begin to view paleontological records differently, "says Dr. Munier." We are more aware of the diversity and complexity. "

The ancestor of all living people can be traced back to Africa. DNA studies show that our common ancestors lived somewhere on the continent 260,000 and 350,000 years ago.

But how these early humans evolved is a lasting mystery. The record of fossils in Africa during this period does not offer easy answers. Over the decades, researchers have found only a few remains with a strange mix of features.

In 1986, for example, paleoanthropologists discovered fossils in Kenya between 270,000 and 300,000 years old. They called it "archaic Homo sapiens". Other experts have argued that it belongs entirely to another species. And others just threw up their hands.

Two years ago, a team of scientists working in Morocco offered a new major clue. They discovered a set of fossil remains around 315,000 years old belonging to Homo sapiens – the oldest remains of our species discovered so far.

But these people were different from modern humans in some important ways. For example, they lacked chins and had long, low brains.

Dr. Munier and Dr. Lara aimed to understand how mysterious fossils from across Africa relate to modern humans. Researchers have developed mathematical techniques for comparing skull structure in search of evolutionary connections.

The first challenge was the fact that people today do not share perfectly identical skulls. There are many variations from person to person. The population has slightly different forms of skull on average, but these averages can be misleading.

"We know that there can be many more differences in a population than between two populations," says Dr. Munier. "We are all very similar, and yet we are all very diverse."

No one's skull can stand up for everyone. So, Dr. Munier and Dr. Lar walked their way back from this modern variety to what they consider to be the skull of a common ancestor.

They took a CT scan of 260 skulls of a wide range of people – from inhabitants of the African tropical forests to the Pacific islands to the coast of Greenland. They also scanned 100,000-year-old skulls found in Israel that are apparently similar to those of living humans.

Researchers also selected a selection of extinct human relatives, such as Neanderthals, to study in the same way. [19659015] Then the scientists placed all these living and extinct individuals on an evolutionary tree. In this way, they were able to track the evolution of the skulls at each of the branches, resulting in a picture of the skull of the common ancestor of the living humans.

"More or less, this is a fairly modern man," Dr. – said Munier about the skull. "But it doesn't really fit any current population – it's something different."

The transmission of this skull to our ancestors shows the same vaulted brainstem we have today. But it also has heavier ridges and a prominent lower face.

Dr. Munier and Dr. Lar compare the skulls of their ancestors with true African fossil skulls of the same period. Researchers have found a number of differences – in fact, so many that they believe that the fossils do not belong to one population but to three.

The Moroccan fossil belongs to one population. Another fossil discovered in Tanzania is the second. The third population includes two fossils from two sites, thousands of kilometers away: South Africa and Kenya. This third population, the researchers concluded, most closely resembles the ancestor of modern humans.

The evolutionary lineage that gave birth to modern humans created a number of populations in Africa about 350,000 years ago, Dr. Munier and Dr. Lar speculate. All of these people had big brains and made increasingly sophisticated tools.

But there were clear differences in their anatomy. In Morocco, for example, early Homo sapiens had many Neanderthal species. "Obviously not the closest candidate to play a role in the evolution of modern humans," says Dr. Munier.

The populations from which the Moroccan and Tanzanian fossils originate may have disappeared without contributing to the gene pool of human life.

But other groups may have come into contact at times and are interconnected. This is what may have happened to the ancient people of East and South Africa. "The idea is that they merge to ultimately form our species," says Dr. Munier.

Catherine Harwati, a paleoanthropologist at the University of Tubingen in Germany who did not participate in the new study, called it "a really great way to test fossil hypotheses." ”

But she warned that any reconstruction of our common ancestor depends on the skulls that scientists are examining. In addition to the fossils from Israel, she would like to see other fossils of modern humans added to the analysis.

Additional data can change the virtual skull – and maybe even theories about our origins.

Dr. Munier sees the new study as a framework for studying human origins, not the last word. "There are many things we can do, even without new fossils," he said.