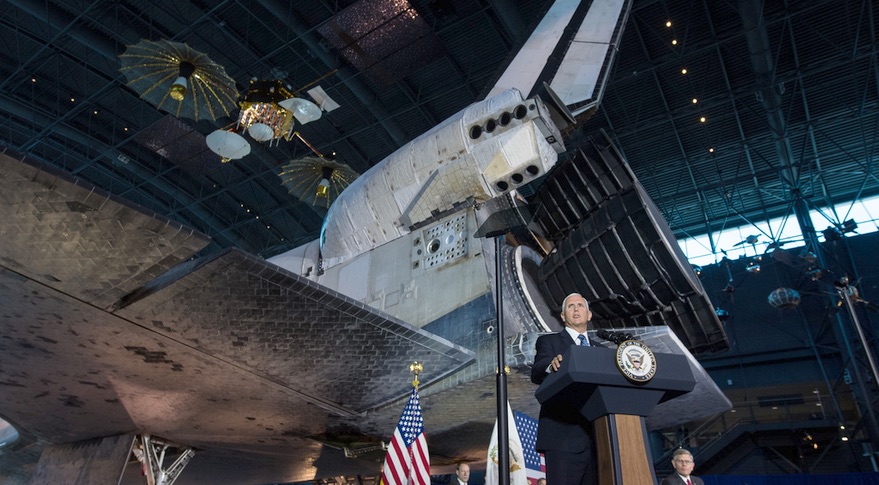 CHANTILI, Washington – Nearly five months after it directed NASA to accelerate its plans to bring people back to the moon, Vice President Mike Pence said on Aug. 20 that the agency's efforts have been "on track" ever since. [19659002] Pence, chairman of the sixth meeting of the National Space Council since its restoration two years ago, made no significant changes to civilian space policy, as did the previous March 26 meeting in Huntsville, Alabama, when he called for NASA people at the south pole of the moon within five years.

Instead, Pence focused on the progress NASA has made on key elements of its exploration efforts, known as the Artemis program, including the Orion spacecraft launch system and NASA plans announced after the previous meeting of advice, work with industry to develop lunar landowners appreciated by humans.

"The mission of Artemis has already begun. We are about to make NASA's moon-to-Mars mission a reality, "Pence said in his opening remarks at the National Air and Space Museum's Udvar-Mist Center here with the Discovery Space Shuttle as the backdrop for the event .

"Our Moon-Mars mission is on the way and America is once again leading the study of human space," he said later in a speech.

During a key council meeting, NASA Administrator Jim Bridenstein, sitting next to Pence, reiterated the agency's progress toward meeting its human space exploration goals in programs such as SLS and the Moon Gateway. "Mr. Vice President, things have changed since March and we are moving rapidly under your leadership and the direction of President Trump," he said.

Trump has in several speeches since then mentioned by us And it will send people to Mars, ignoring the closer plans to return to the moon. "In a program that has just launched, one day very soon, American astronauts will plant our beautiful stars and stripes on the surface of Mars," Trump said in a speech on July 30 in Williamsburg, Virginia NASA has not set a date for a human mission to Mars, although independent studies of such a mission were not feasible for the agency before the mid-1

Pence cited the President's comments during a passage from his speech about the importance of -education remains on the moon and learning to use resources there. "Once we return to the moon, we will develop the technology to live and flourish on a long-term expedition to our south pole," he said. "Using what we learn on the moon will bring us closer to the day, as the president has said that astronauts will plant stars and stripes on the surface of Mars."

Bridestin tied the development of the Moon Gateway to Mars, too. "It's also evolving," he told Gateway. "This is an opportunity for us to take people deeper into space than we have ever walked in human history, and it is actually our ship to get to Mars."

Bridenstein, in his remarks during the meeting, mentioned that he had been to the White House a day earlier to brief the National Security Council on the agency's research plans. While he is there, he said, Victoria Coates, the council's senior director, brought a box of M&M candy in a box with the presidential seal on it.

While Pence advertised the progress NASA has made over the last few months, suggested that the agency need to make changes to work [19659002] "We will continue to transform NASA into a leaner, more responsible and more flexible organization," he said in his opening address. "Isn't that right, Jim?" Bridenstein nodded.

"We will make it easier than ever to recruit and retain the world's most prominent scientists, engineers and managers, and achieve our goals and make a new American history in space," Pence added.

Pence did not elaborate on these proposed changes. At the end of the two-hour meeting, he summarized a list of recommendations that he presented to the council for their approval. They include "specific deadlines for labor reforms, acquisition rules, governance issues and an industrial base," he said. The recommendations also call for NASA to designate an office and submit a plan for the next 60 days for "a sustainable lunar surface survey and development of crew missions to Mars."

US companies in the fast-paced and highly competitive global remote sensing market, "Commerce Secretary Wilber Ross told the meeting. He said his department is working with the State Department and other agencies to review the comments submitted and include them in the final version of the revised regulations for licensing commercial remote sensing systems.

The final rule, according to him, should come out this fall. "We think by the end of October we have to finish this work," he said when asked about Pence's schedule. However, some in the industry are skeptical of this schedule, given the volume of industry commentary and likely interagency debates about how to get involved.

The Ministry of Transportation, through the Federal Aviation Administration, is now turning its attention to the comments submitted. with regard to licensing regulations, many of which were critical of various aspects of it. "Obviously, the proposed rule has generated a lot of interest and a lot of questions," says Stephen Bradbury, general counsel for the department.

Bradbury said the FAA has met with a number of companies and organizations on the proposed rule, including Blue Origin, Boeing, the Deep Space Exploration Coalition, Lockheed Martin, SpaceX, United Launch Alliance, Virgin Galactic and Virgin Orbit. These one-on-one meetings were held instead of a wider public meeting on the proposed rules, which many in the industry requested.

"We will be intensified in the work in the coming months to deal with the problems and look at possible revisions to improve the final rule," he said. "Our goal is to publish a final rule by early fall next year."