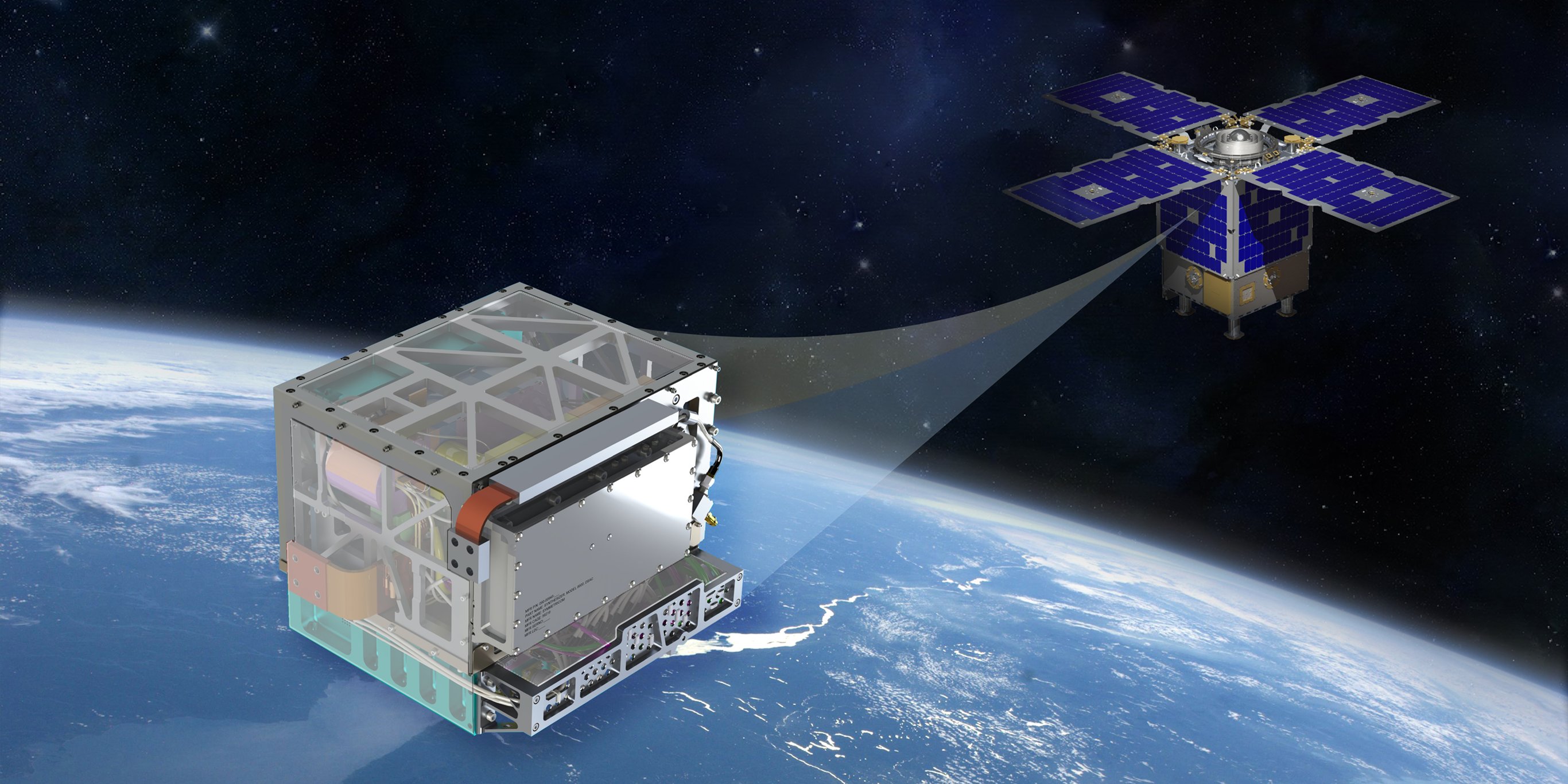 SpaceX plans to lift its Falcon Heavy Rocket – the most powerful operational launch system in the world – for a third time on June 24.

When the 230-foot-tall rocket thunders away from Cape Canaveral, Florida, it will carry 25 small spacecraft inside its nosecone, including a groundbreaking clock designed to be the most accurate ever to work in space.

NASA has created the multi-million-dollar watch, called the Deep Space Atomic Clock (DSAC), to keep track of time in space more accurately than any other device before it – without being too heavy or big, or consuming too much energy .

The DSAC, which is the size of a four-slice toaster, is designed to keep time that is accurate within one-ten-millionth of a second over the span of a year.

But obsessive timekeeping is not the overarching purpose of DSAC. The project's ultimate goal is to help robots and crew ships navigate the solar system autonomously, without instructions from Earth. That's something spacecraft can not do today, but the capability would open the door for more flexible missions and could make some scientific instruments more powerful.

Todd Ely, a space navigator and leader of the DSAC experiment, said he thinks this type of clock will also be crucial for future human space explorers. Without an on-board atomic clock like DSAC, astronauts traveling to Mars might have to wait as much as 20 minutes for timekeeping signals from Earth to reach their spacecraft (since light takes a torturously long time to zip from Earth to deep-space locations) . By then it might be too late.

"If we get out of Mars, the crew will want to know where they are at, and they will need to know it ̵

1; potentially in real-time – in case they have to make last-minute course adjustments , "Ely told Business Insider.

But all clocks have drift – a measure of inaccuracy – due to impurities in materials, changing temperatures, magnetic disturbances, and other factors.

This drift does not amount to much for wristwatches, perhaps 20 microseconds (or 0.002% of a second) per day, so it's not a problem for those of us trying to get to a meeting on time. In space, however, "the stability and precision of the clock becomes extremely important," Ely said.

For example, NASA and other agencies keep track of a spacecraft's location and speed by sending it a radio signal and seeing how long it takes the spacecraft to send it back. Because light travels at 670,616,629 mph and a return trip of 10 minutes would mean that a spacecraft is about 111.8 million miles away from Earth.

But this also means a clock's daily drift of 20 microseconds can introduce an error of nearly 4 miles – which is how far light travels in that fleeting speck of time. And that could mean missing a critical window for a space maneuver or even smashing into a planet's surface instead of landing softly upon it.

Right now, agencies like NASA use ground-based atomic clocks to attack this problem.

[196590017] Instead of using materials like quartz to generate a tuning-fork-like frequency, atomic clocks use vapors or plasmas of a carefully chosen periodically. In the case of DSAC, that element is mercury.

The atoms are ionized to strip away one or more outer electrons, allowing them to be trapped and cooled in a small space. A light is then shined on the ionized atoms, whose remaining electrons absorb some of that light, jump up in the energy level, and then quickly fall back down. When the exccited electrons release the energy they have temporarily absorbed, they re-emit it as a light of a different and highly predictable frequency. It is this signal – the glow of excited electrons – that can be used to keep time with extreme accuracy.

The ionized atoms can bang into the walls of their container, though they can still cause drift. So atomic clocks use a number of tricks to prevent collisions, including cooling and electric fields. DSAC's makers claim their device can prevent wall collisions altogether – which gives it such high stability and accuracy.

The atomic clocks found in GPS satellites use the element rubidium, while more accurate atomic clocks use cesium, which has about 2,300 times less daily drift compared to a wristwatch. But DSAC's mercury ion, Ely said, is a particularly "non-drifting kind of tuning fork."

Mercury ions do not require much power or room, Ely said, adding that they should help DSAC beat the reliability of any atomic clock currently found on GPS satellites or other spacecraft.

"If we're able to reproduce what we've seen on the ground in our testing, once DSAC is in space, it should be the most stable atomic clock in space," he said. "We've actually talked to the Air Force about its potential use in future GPS satellites or other [Department of Defense] -type applications." Technicians integrate NASA's Deep Space Atomic Clock into the Orbital Test Bed Earth-orbit satellite General Atomic; NASA

Eventually, Ely and his collaborators want to shrink DSAC into a smaller and more efficient atomic clock for future deep-space missions.

That could be a game changer, since right now, NASA's spacecraft has to wait for directions from mission control. That's because there's no GPS for deep space: All of the best atomic clocks are located on Earth, giving navigators there (like Ely) the best information to program maneuvers. So instructors on Earth upload the instructions ahead of a maneuver – which means they run the risk of not accounting for unforeseen conditions or problems during the final moments of, say, a Mars landing.

Having a DSAC-like device on a spacecraft may deny the need for the vehicle to wait for Earth's help. Instead, a spacecraft could "listen" for a broadcast of time from an atomic clock on Earth, then compare it to its local time (similar to GPS). This would allow the spacecraft to estimate its own location and speed in that moment.

Such information may allow a spacecraft to automatically compute and execute a course change if there is an alluring target for exploration or a looming danger – things Earth would not learn about for crucial minutes due to the limited speed of light.

"You have a very powerful set of data for computing at the trajectory very accurately, very robustly and in real-time for autonomous navigation," Ely said.

For now, though, the initial goal is to show that DSAC can keep its timing error below 2 nanoseconds per day. Ely said the team is gunning for no more than about 0.3 nanoseconds (0.00000003% of a second) per day; put another way, it would take more than 9.1 million years for the clock to be off by 1 second.

"A good metric for us is not to drift outside of a few centimeters in the course of part of a day, and that's at nanosecond or better level of stability over a day, "Ely said, adding:" We've seen that kind of performance on the ground, and we expect to be able to do the same in space. "

The DSAC may also help future scientific instruments map the guts of icy moons that hide oceans of water, such as Europa or Ganymede, with a precision that is not currently possible. That's because the ability to better understand the subtle changes in speed turns a spacecraft into a gravity sensor, which can reveal the presence of a planet's hidden structures.

Similarly, precise timing can help turn cameras into powerful secondary navigation sources: Since astronomers know where objects in space should be at a given time, the clock can turn images of asteroids, moons, stars, and so on into another mapping tools. This gives robots and astronauts even more confidence in navigating through space and the ability to more safely reach their intended destinations.

"Let's say you have a camera system fail on you. Well, you're not dying – you can start relying on radio data," Ely said. "You have not lost the ability to navigate."

Of course, that is not yet a reality – DSAC first has to work in space, then the concept has to get shrunk down to a palm-sized version that consumes perhaps 40% less power.

"What we've learned in developing our prototype unit is how to significantly reduce the size for the next version," Ely said.

SpaceX plans to launch DSAC between 11:30 pm ET on June 24 and 3:30 am ET on June 25. The deployment of all 25 satellites, one of which DSAC is hitching and riding on, will take several hours. The company plans to show a live webcast of launch via YouTube.