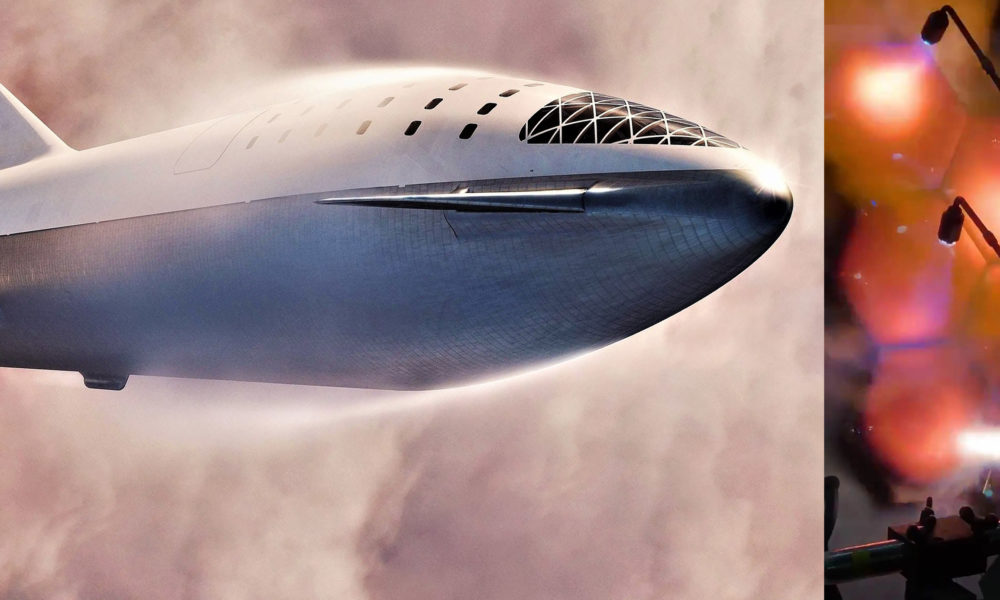 The SpaceX CEO Elon Musk says that the company's South Texas workforce has already begun manufacturing the first orbital-class Starship prototype, while Hawthorne engineers and technicians are in the midst of performing small-scale testing of the unprecedented stainless steel heat shield .

It will be assembled out of the hexagonal tiles of (presumably) stainless steel, the Starship's metallic heat shield will be one of the most crucial aspects of the orbital spacecraft, especially with respect to ensuring that it's extraordinarily easy to reuse. It will survive extreme interplanetary-velocity reentry conditions at Mars, Earth, and beyond, and remain in a functional, flight-ready condition after landing. SpaceX will need to implement the world's first orbital-class metallic heat shield with an immature technology known as transpirational cooling.

By quite literally drilling into the heat shield plates at the hottest parts of Starship's hull, transpirational cooling effectively allows a large portion of the heat of reentry to be wicked away by the flash evaporation of a liquid, typically water . For SpaceX's Starship, it is likely that the liquid of choice would be either liquid water or liquid methane, the former of which offers better cooling per unit mass at the cost of added plumbing complexity and spacecraft mass, while the latter would use the same propellant fueling the ship at the cost of worse cooling per unit of mass. Either way, SpaceX will be heading into a unproven territory, requiring extensive ground and flight testing to ensure that the concept is truly viable and then verify that it can be made as reliable and reusable as it just has to be.

7th by Musk indicate that SpaceX is indeed deep into the process of extensive and often destructive testing, something the company has proven to be exceptionally good at. It's unclear if the above test of Starship's hexagonal heat shield tiles – probably made out of a variant of 300-series stainless steel – involved tiles with active or passive cooling, but Musk suggested that hot spots created with spin-forming torches reached temperatures as high as 1650 Kelvin (2500ºF / 1400ºC) Unlike the ablative heat shields SpaceX is familiar with building and operating through its crew and Cargo Dragon spacecraft, and a stainless steel heat shield would be expected to almost completely resist erosion during extremely high -Verocity reentries of at least 12-14 km / s (~ 31,000 mph, Mach 40+)

Meanwhile, Musk also confirmed that SpaceX has decided to skip constructing a replacement nosecone / fairing for Starhopper, and a functional Starship prototype that will be used to conduct extremely short hop tests like Falcon 9's development-era Grasshopper and F9R test articles. Over the last several weeks, SpaceX technicians have been quickly assembling what was initially assumed to be the replacement fairing Musk had previously suggested would be built. Instead, the duo of stainless steel barrel sections – relying on steel much thinner than the heavy-duty stuff used to build Starhopper – is apparently the beginnings of the first orbital-class Starship prototype, said Musk to aim for flight-readiness as early as June 2019 about two months ago.

While still an extremely ambitious target for a vehicle that has yet to conduct any integrated hops or flight -tests in any form, the fact that SpaceX has begun the process of building the first orbital Starship in late February could actually give the company's engineers and technicians a chance to complete Starhopper testing and Starship assembly over the next 90-100 days.

If stacked atop each other, the two new steel sections in work would likely stretch and solid 20-30 meters (65-100 ft) tall. Meanwhile, the first orbital-grade tank domes and / or conical nose section is also in the process of being welded together out of smaller segments, already fast approaching something ready to be installed inside the steel barrel sections