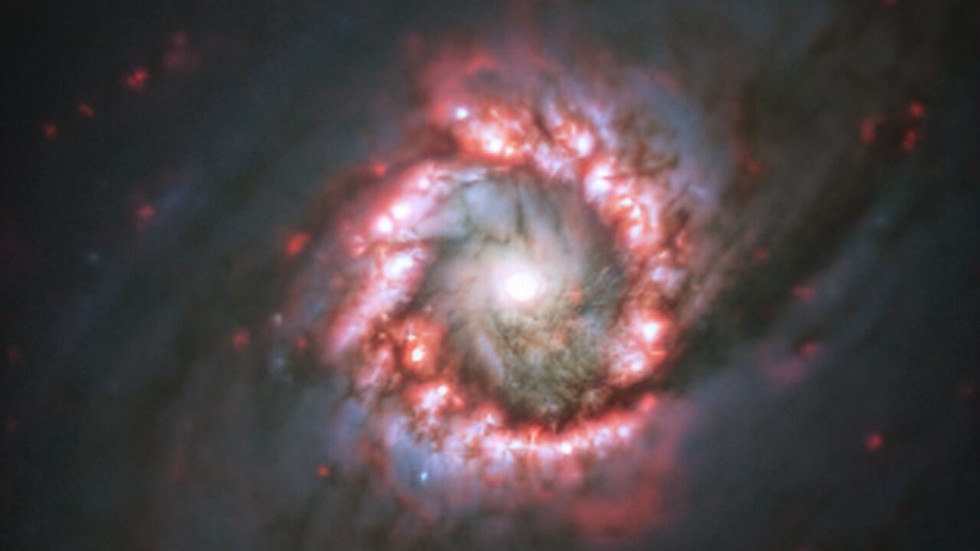 In a distant, distant galaxy, astronomers have discovered an incredibly beautiful phenomenon that sees a scattered star ring around a supermassive black hole, like the petals of a rose.

The European Southern Observatory filmed the stunning stellar light show thanks to the MUSE instrument on its very large telescope (VLT).

The magnificent image captures a distant spiral galaxy known as NGC 1097, located 45 million light-years from Earth, in the constellation Fornax.

A supermassive black hole is located in the center of the charming galaxy and the unusual ring of star-forming regions completely surrounds it.

Studies show that the luminous ring of star-forming regions has a network of gas and dust that spirals down to the black hole. ESO stated that the image shows a Textbook Example of a star-scattered nuclear ring.

The ring gives birth to new stars due to the influx of material to the center of the galaxy. It extends approximately 5,000 light-years in diameter, which means it is smaller than the full size of the galaxy, which extends tens of thousands of light-years beyond.

The darker sails captured in the MUSE image show dust, gas and debris heading towards the supermassive black hole.

“The nearby dust heats up and star formation accelerates in the area around the supermassive black hole, forming a nuclear ring scattered by stars, shown in pink and purple tones in the image.” add it.

MUSE, which means Multi-Unit Spectroscopic Explorer, is attached to one of the four 8.2-meter telescopes that make up the very large telescope. Its unique design allows researchers to map complex mechanisms in many galaxies and analyze star formation and star clusters.

The telescope is located at the ESO Observatory in Paranal in the Atacama Desert in northern Chile.