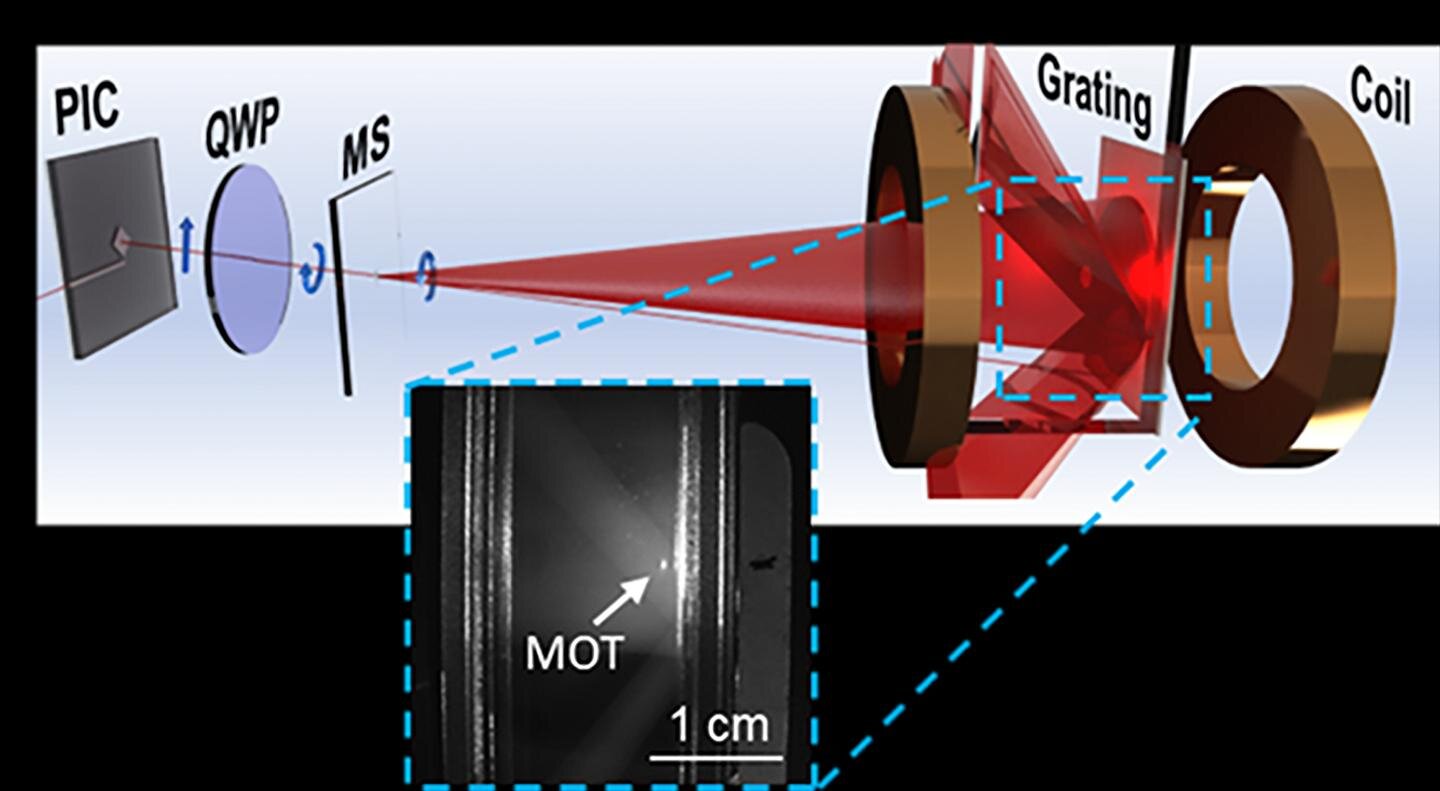 It’s cool to be small. Scientists at the National Institute of Standards and Technology (NIST) have miniaturized the optical components needed to cool atoms to several thousand degrees above absolute zero, the first step in using them on microchips to power a new generation of super-accurate atomic clocks, allowing navigation without GPS and simulate quantum systems.

Cooling atoms is tantamount to slowing them down, making them much easier to study. At room temperature, atoms collide in the air at almost the speed of sound, about 343 meters per second. Fast, randomly moving atoms have only fleeting interactions with other particles, and their motion can make it difficult to measure the transitions between atomic energy levels. When atoms slow to creep – about 0.1 meters per second – researchers can measure the energy transitions of particles and other quantum properties accurately enough to use them as reference standards in countless navigation and other devices.

For more than two decades, scientists have cooled atoms by bombarding them with laser light, a feat that NIST physicist Bill Phillips shared the Nobel Prize in Physics in 1997. Although laser light would normally energize atoms, making them move faster. , if the frequency and other properties of light are chosen carefully, the exact opposite is obtained. After hitting the atoms, the laser photons reduce the momentum of the atoms as they move slowly enough to be captured by a magnetic field.

But to prepare the laser light so that it has the properties to cool the atoms, an optical device as large as the table in the dining room is usually required. This is a problem because it limits the use of these ultra-cold atoms outside the laboratory, where they can become a key element of extremely accurate navigation sensors, magnetometers and quantum simulations.

Now NIST researcher William McGee and colleagues have created a compact optical platform only about 15 centimeters (5.9 inches) long that cools and traps gaseous atoms in a 1-centimeter region. Although other miniature cooling systems have been built, this is the first to rely solely on flat or flat optics that are easy to mass produce.

“This is important because it shows a way to create real devices, not just small versions of lab experiments,” McGee said. The new optical system, although still about 10 times too large to fit on a microchip, is a key step toward using ultra-cold atoms in a variety of compact, chip-based navigation and quantum devices outside the laboratory. Researchers from the Joint Quantum Institute, a collaboration between NIST and the University of Maryland at College Park, along with scientists from the Institute of Electronics and Applied Physics Research at the University of Maryland also contributed to the study.

The apparatus described online in New Physics Journal, consists of three optical elements. First, light is emitted from an optical integrated circuit using a device called an extreme converter. The transducer magnifies the narrow laser beam, initially about 500 nanometers (nm) in diameter (about five thousandths the thickness of a human hair), to 280 times that width. The magnified beam then strikes a carefully designed, ultra-thin film known as a “metasurface”, studded with small poles about 600 nm long and 100 nm wide.

Nanopillars act to further expand the laser beam by another factor of 100. Dramatic expansion is necessary for the beam to interact effectively and cool a large collection of atoms. Furthermore, by performing this feat in a small area of ​​space, the metasurface miniaturizes the cooling process.

The metasurface reshapes light in two other important ways, simultaneously changing the intensity and polarization (direction of vibration) of light waves. The intensity usually follows a curving shape, in which the light is brightest in the center of the beam, with gradual fading on both sides. NIST researchers have designed nano-pillars so that small structures change in intensity, creating a beam that has the same brightness across its entire width. Uniform brightness allows more efficient use of available light. Polarization of light is also critical for laser cooling.

The expanding, reshaped beam then strikes a diffraction grating that divides the single beam into three pairs of identical and oppositely directed beams. Combined with an applied magnetic field, the four rays pushing the atoms in opposite directions serve to capture the cooled atoms.

Each component of the optical system – the transducer, meta-surface and grating – was developed at NIST, but was in operation in separate laboratories at NIST’s two campuses in Gaithersburg, Maryland and Boulder, Colorado. McGehee and his team assembled the various components to build the new system.

“It’s the fun part of this story,” he said. “I knew all the NIST scientists who worked on these different components on their own, and I realized that the elements could be combined to create a miniaturized laser cooling system.”

Although the optical system will have to be 10 times smaller to cool the atoms with a laser on a chip, the experiment “is fundamental proof that it can be done,” McGee added.

“Ultimately, reducing light preparation and the less complex will allow laser-based technologies to exist outside laboratories,” he said.

Provided by the National Institute of Standards and Technology