Suspect in US Islamic State "stuck on Turkish border" 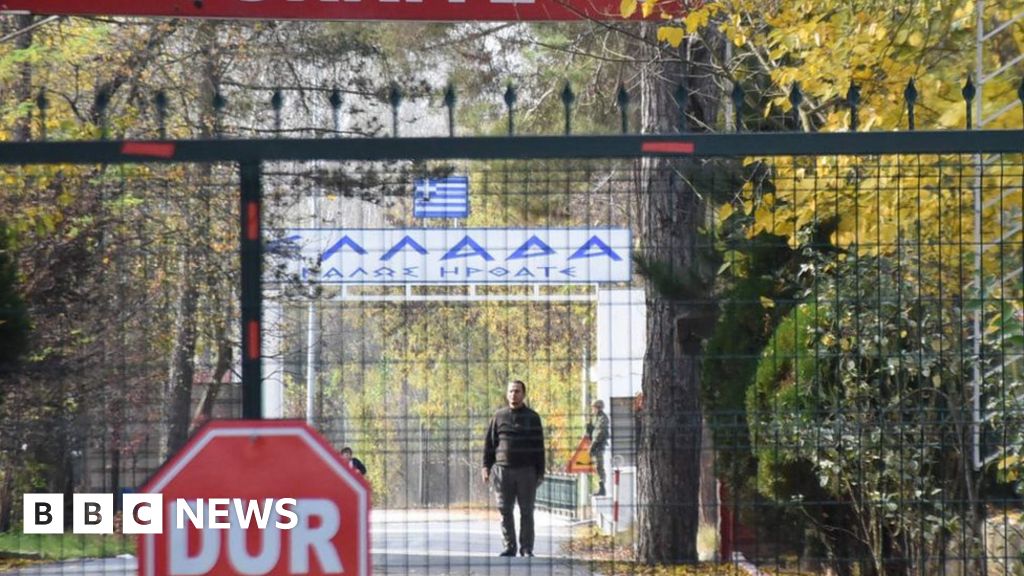 A US citizen suspected of being an Islamic State militant has been stranded on the border between Greece and Turkey after Turkey expelled him.

The alleged ammunition was deported on Monday as Turkey seeks to repatriate captured jihadists held in its prisons.

Greek police stated that they refused him entry when he tried to cross the border near the Greek city of Kastanis.

It is reported that the man spent the night stuck between the two borders.

He was named by the Turkish news agency Demiroren as Mohammed Darvis B and is said to be an American citizen of Jordanian descent.

A Turkish official told AFP that he had refused to be returned to the US and instead requested to be sent to Greece.

On Tuesday, he was still stuck on a lane between the two sides and witnesses said he was trying to shout at reporters from the Turkish side.

The fate of foreign IS fighters has been a key issue since the group's defeat in the territory it controls in Syria and Iraq.

Turkish President Recep Tayyip Erdogan has indicated that 2500 such fighters are in prison in Turkey.

Unfinished business after the defeat of the IP

There may be a few more graphic illustrations than the unfinished business left over from the military campaign of the US-led Coalition to Win the IP.

More than 70 countries came together to defeat and dismantle the jihadist caliphate that terrorized much of Iraq and Syria. But as with other military campaigns in the Middle East, they failed to plan enough for the consequences.

After the last IS battle with Baghuz in Syria in March, thousands of IS fighters and their dependents were interned in camps. Turkey, which has arrested IS members for years, now has about 2,000 of them in its prisons.

Turkey, Iraq and the Kurdish authorities all want Europe and the West to hurry up and take back their citizens, but so far governments have been extremely reluctant to do so, in part because of fears that the prosecution might fail.

Current expulsions in Turkey threaten to force them.

Who else has deported Turkey?

The Turkish Interior Ministry said it had also deported a Danish who was allegedly a member of the IS on Monday. Danish authorities have stated that their citizen was arrested on arrival in Copenhagen.

Germany stated that one of its citizens was also expelled.

Turkey has stated that more than 20 other European suspects, including 11 French nationals, two Irish nationals and several more Germans, are in the process of repatriation in their countries of origin.

Turkey has long accused the Western countries of refusing to take responsibility for citizens who have joined the Islamic State.

Germany, Denmark and the United Kingdom have repeatedly imprisoned nationals for allegedly joining jihadist groups abroad in an attempt to block their return.

It is said that the United Kingdom has withdrawn citizenship from more than 100 people – among them is IS recruitment Shamima Begum, who left London as a teenager.

UN Antonio Guterres has called for international co-operation to resolve foreign jihadist issues, saying that it is not for Syria and Iraq to "solve the problem for everyone".

The UN has previously said that countries should take responsibility for their own citizens unless they are prosecuted locally, in accordance with international standards.

Turkey has not confirmed whether the repatriates were seized in Syria or in Turkish territory.

Some IS members and their relatives were captured in northeastern Syria in October, when Turkey launched a cross-border operation against the Kurdish Syrian Democratic Forces (SDF) there.

At that time, the SDF stated that it was holding more than 12,000 suspected IS members in seven prisons in the area, with at least 4000 of them being native citizens.

Relatives of suspected IS fighters have also been detained in a number of IDP camps – the largest of them being Al Hall, home to nearly 70,000 people.

How Will Repatriation Work?

A French Ministry of Foreign Affairs source told AFP last week that suspected jihadists were frequently returned to France from Turkey under a 2014 agreement.

The German Interior Ministry said this week that it "does not want to oppose the return of German citizens."

The German Foreign Ministry confirmed that there are legal proceedings in Turkey involving at least three men, five women and two children.

On Monday, a court in the Netherlands ruled that the country should take back Dutch children of women who joined the IS but not necessarily their mothers.

Currently, about 23 Dutch women and their 56 children are being held in detention camps in Syria, AFP reported.

It is not clear whether Turkey will be able to repatriate IP suspects who have abolished their nationality.

Covid: Taverns and restaurants in England must be closed at 22:00