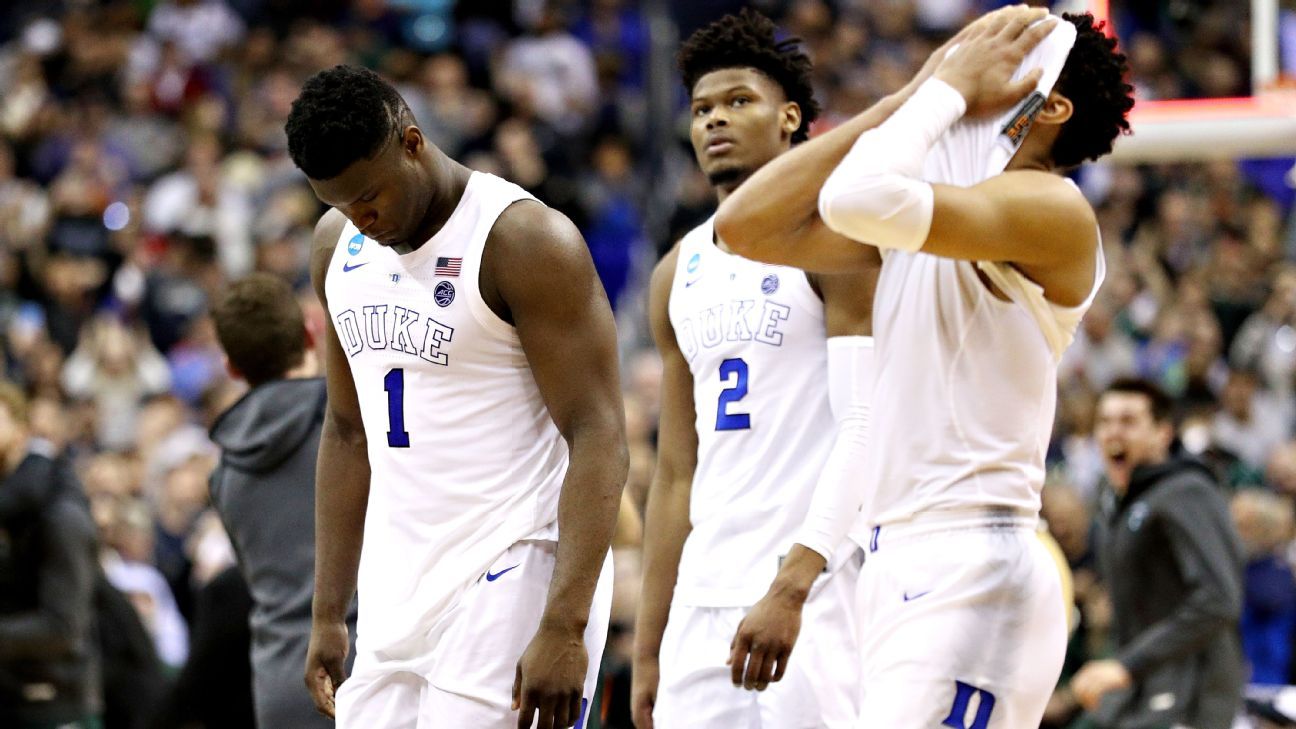 Duke's quest for a national championship came to an end on Sunday, as the Michigan State outlasted the Blue Devils 68-67. The biggest story in college basketball since November, Duke fell short of the Final Four. What happened? And what's next?

Zion's college career is probably over

That's probably the last we'll see of Zion Williamson in college basketball. The heavy favorite to go 1 in the NBA draft, Williamson has not officially declared his intentions, but it would be the stunner of stunners if Williamson returned to Durham for his sophomore season. He came to college as a viral star, and a top-three prospect and one of the candidates to go. 1 in the draft. If he leaves, he leaves as one of the most unique players to come through college basketball in decades ̵

1; and the clear-cut best player in the country. We could not see another player like Williamson for some time.

Zion does not get one of the final three shots

If you had flashbacks to Duke's loss to Gonzaga at the Maui Invitational down the stretch, you were not alone. In that game, RJ Barrett took charge down the stretch, and Williamson barely touched the ball late in the game. Duke lost. On Sunday, Barrett took the shot on Duke's final three possessions, despite Williamson's dominating the rim throughout the game. Zion finished with 24 points and 14 rebounds, using his athleticism and physicality to power through the paint. Barrett hit three 3-pointers but struggled to finish in the paint for most of the game. He missed a leaner in the lane with 50 seconds left, then missed and 3-pointer with 12 seconds left, then got fouled on a drive with about five seconds left. Williamson's last shot came with 1:41 remaining

Is Cassius Winston the best athletic or the quickest player in the country? No. Is he the best shooter? Probably not. But there may not be a better leader or a winner in college basketball than Winston. He has taken a team that lost Joshua Langford to injury earlier this season, and a team that lost Kyle Ahrens to injury recently, and a team that had hampered Nick Ward for most of the past month – and carried them to the Final Four. He finished with 20 points and 10 assists against Duke on Sunday, and every time the Spartans needed a basket to stop and run or extend lead, he was there to score.

Williamson, Barrett and Cam Reddish came into Duke billed as a trio. The three best high school prospects in the country and potentially the top three picks in June's NBA draft. It quickly became clear that it was a two-man show with Williamson and Barrett. Reddish gave Duke a different dimension because of his ability to make shots from the perimeter, but that was not an every-game occurrence. Against the Michigan State, with the Spartans crowding Williamson and Barrett on the rims, the Blue Devils really needed someone to step up and make 3 pointers

Tre Jones hit five 3-pointers against Virginia Tech, but that was the first time he had hit multiple 3-pointers since November. This was a game for Reddish. He might have been hampered by whatever knee injury he kept out of the Hokies, but he did not provide much on the offensive end. He shot 2-for-6 from 3-point range and finished with just eight points in 37 minutes. Throughout the season, Duke was always at its best when Reddish was giving Mike Krzyzewski a bona fide third option.

Another reload looms for Duke

Krzyzewski is used to this by now, but he is probably facing another massive rebuild in Durham. Last year, he lost Marvin Bagley, Grayson Allen, Wendell Carter, Gary Trent and Trevon Duval – his entire starting five. He will not lose that many players this season, but he does not have the top three players in the 2019 class waiting in the wings. Williamson is probably gone, Barrett is probably gone, and Reddish is probably gone. Tre Jones could decide to come back and work on his jumper, and Marques Bolden and Javin DeLaurier should be back down low. Role players Alex O'Connell, Jack White and Joey Baker will all be back

Of course, Duke has another elite recruiting class coming in, with top-five prospect Vernon Carey Jr. the centerpiece. Five-star small forward Wendell Moore and four-star combo guard Rejean Ellis round out the class. However, Coach K and his staff are in pursuit of several players, including the top-10 prospect of Matthew Hurt and Alabama transfer Kira Lewis. The roster is still in flux at this point.