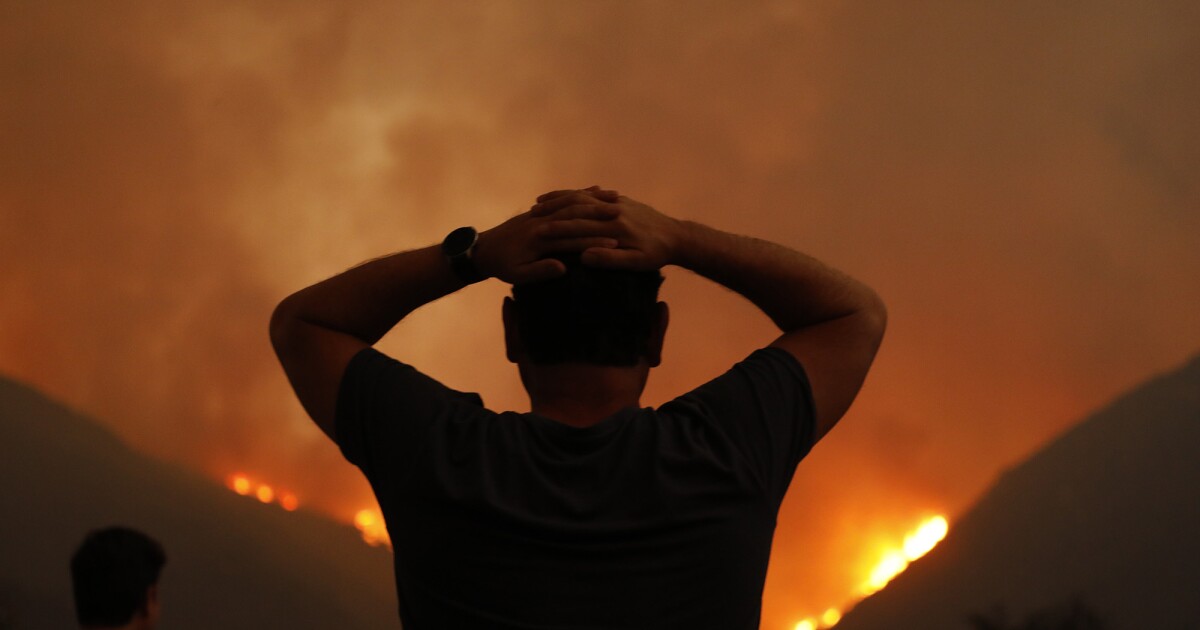 A fast moving fire erupted in a hill on the terrain near Murieta
on Wednesday night, quickly burning nearly 1,000 acres and pushing mandatory evacuation orders for a housing enclave as fire officials urged others nearby to leave voluntarily.

At least 300 firefighters in Riverside County responded to a fire in Tenaya that sent an ominous massive noise noise in the evening. At night, the hills fell in hot and windy conditions in a day marked by thunderstorms in the region. By 9:30, the fire had burned the slopes of unincorporated Riverside County and appeared to be heading northeast toward Murieta.

Mandatory evacuation orders include all homes along the La Cresta Circle of Trails and the Santa Rosa Plateau Visitor Center along Clinton Keith Road. Locals of Copper Canyon and Bear Creek were also invited to evacuate.

The fire was held by a heavy brush and was reported at about 4:00 pm. near Tenaja Road and Clinton Keith Road, according to the California Department of Forest and Fire Protection, or Cal Fire.

Residents nearby were surprised by the speed of the fire.

Rachel Guilderslew, unaware of the severity of the fire, had just exploded, decided to take her way back home from school.

8-year-old Murieta resident began to see smoke and then a small flame. The two cars in front of her kept going, and Gildersleeve looked at the burned ground and realized that the fire must be controlled.

But as she and the others moved along Tenaya Road toward Clinton Keith Road, fire broke out around her. Without a mobile service, she couldn't call 911. Her only option was to keep driving.

Finally the smoke cleared and Guilderslew saw several fire trucks in the distance.

Six air tankers and three helicopters were occupied throughout the evening, releasing water and slowing down on the rising flame, but they were grounded at night
"The Orange County Fire Department has sent two helicopters with night-flying capabilities," said Tawny Cabral, a Cal Fire Riverside public information officer, at about 8 p.m. Wednesday.

22-year-old Ray Rock from Murietta stood in his front yard Wednesday night, watching the fire approach. Rock said the fire was about half a mile from his home while the crow was flying.

"So I'm watching a fire comb Tenaya over the hill toward Murieta," Rock said. "I would say (the flames) are no more than a kilometer and a half from the neighborhoods."

Beth Maranville, 59, of Murietta, stood near the ridge at Oak Estates Wednesday night, watching the fire grow closer to the homes, Maranville had watched the fire when he was near La Cresta and was shocked by how quickly he chewed through the brush.

Around 8:00 pm, law enforcement entered the area and asked Maranville and others to evacuate voluntarily, she said.

"I just saw the lights go out from the nearest house," Maranville said. "They had already wet their house. It doesn't look good, but we have prayed and will trust in God. ”

This is breaking news and will be updated as information becomes available.