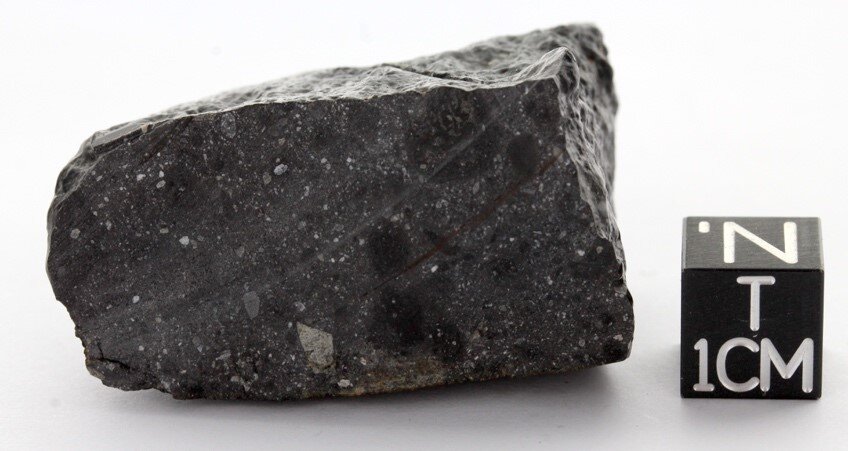 Analysis of an ancient meteorite from Mars suggests that the mineral zircon may be abundant on the surface of the red planet.

By determining the age and composition of the hafnium isotope of zircon, researchers at the University of Copenhagen have shown that a population of these crystals originates from the deep interior of Mars. If the researchers are correct, this means that the young zircons contain information about the deep, inaccessible interior of Mars, providing insight into the internal structure of the planet.

The uranium-containing mineral zircon is an abundant component of the Earth’s continental crust, providing information on the age and origin of the continents and major geological features such as mountain ranges and giant volcanoes. But unlike Earth, the crust of Mars has not evolved and is similar in composition to the crust found beneath Earth’s oceans, where zircon is rare. Therefore, zircon is not expected to be a common mineral on Mars.

“We were quite surprised and excited to find so many zircons in this Martian meteorite. Zircons are incredibly durable crystals that can be dated and that store information that tells us about their origins. Having access to so many zircons is like you open a time window into the geological history of the planet, “said Professor Martin Bizarro of the GLOBE Institute, which is leading the study.

The team studied the ancient Martian meteorite NWA 7533 (Figure 1), called the “Black Beauty”, which was discovered in the Moroccan desert in 2011. After crushing 15 grams of this rock, they extracted about 60 zircons. By age, dated by zircons, they found that most of the crystals date back about 4.5 billion years, the very beginning of life on the planet. But they also made an unexpected discovery: some zircons defined much younger ages, ranging from about 1,500 million years to 300 million years.

“These young ages were a big surprise,” Bizaro said. The Black Beauty meteorite is thought to come from the southern hemisphere of Mars, which has no young volcanic terrain. The only possible source for these young zircons is the volcanic province of Tarsis, located in the northern hemisphere of the planet, which contains large volcanoes that were recently active. ”

The protrusion of Tarsis on Mars is a huge volcanic province, which houses the largest volcanoes in the solar system, which are up to 21 km high. Scientists believe that this volcanic province is an expression of a very deep magmatism that erupts on the surface of the planet. The analogy of the Earth is the Hawaiian volcanic archipelago, which is also believed to reflect deep-seated volcanic activity. But due to plate tectonics, the Pacific plate is constantly moving so that instead of accumulating in one place, a chain of progressively younger volcanic islands has formed. Because Mars does not have plate tectonics, volcanoes accumulate in the same place and grow to gigantic proportions as a result.

If the Bizzarro team is faithful, it means that the young zircons may contain information about the deep, inaccessible interior of Mars. This is the first time scientists have discovered direct access to the deep interior of the red planet, which may allow them to discover the internal structure and composition of Mars.

“Having samples from the deep interior of Mars is key. This means that we can now use these zircons to study the origin of the volatile elements of Mars, including its water, and see how it compares to Earth and other planets in the solar system, “said Mafalda Costa, co-author of the new study.

But to understand the essence of the deep Martian interior, the researchers turned to the analysis of the isotopic composition of the element hafnium in the same zircons.

“Because hafnium is a major element in zircon, it keeps the memory of where zircon formed,” says Martin Bizarro. “We found that the isotopic composition of the hafnium of young zircons is different from any of the known Martian meteorites, indicating that the young zircons came from a primitive reservoir that we did not know existed inside Mars,” he added.

The isotopic composition of the hafnium of young zircons is similar to the most primitive objects in the solar system, ie. chondritic meteorites. These ritual meteorites. These chondritic meteorites are samples of asteroids that have never been modified by their formation. This suggests that the deep interior of Mars has not been substantially modified since the formation of the planet (Figure 2). The existence of such a primitive reservoir is expected for a planet without plate tectonics. Unlike Earth, where the material formed on the surface is constantly recycled inland by plate tectonics, the deep interior of Mars remains unchanged from the birth of the planet and as such retains its original composition.

Finally, the discovery that zircon may be abundant on the surface of Mars may guide future robotic exploration of the planet, especially as part of the return of samples to Earth.

“Our study clearly shows that a return mission aimed at acquiring zirconium samples will have a high scientific value for understanding the geological history of Mars,” concludes Martin Bizarro.

“The internal structure and geodynamics of Mars derived from a 4.2 Gyr zircon record” was published in Notices of the National Academy of Sciences.

Analysis of a Martian meteorite reveals evidence of water 4.4 billion years ago

Provided by the University of Copenhagen

Scientists have accidentally discovered that Australian marsupials glow in the dark

Earth has just approached 2,000 light-years from the supermassive black hole in the Milky Way