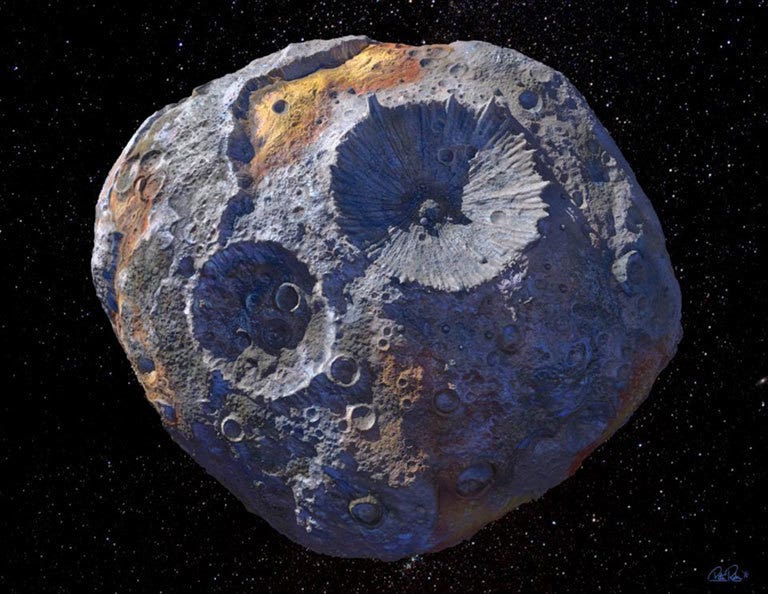 Experts estimate that an asteroid discovered nearly 170 years ago could cost $ 10,000 quadrillion.

The cosmic rock, known as the “16 Psyche”, was discovered on March 17, 1852 by the Italian astronomer Anibale de Gasparis, but a new published study notes that it may be composed almost entirely of iron and nickel. The study’s lead author, Dr. Tracy Becker, estimates it is worth $ 10,000 quadrillion.

“We have seen meteorites that are mostly metal, but Psyche may be unique in that it may be an asteroid that is made entirely of iron and nickel,” Becker said in a statement. “The earth has a metal core, a mantle and a crust. It is possible that while the protoplanet Psyche was forming, it was hit by another object in our solar system and lost its mantle and crust.

According to the World Economic Forum, GDP for the entire planet was 114.4 trillion dollars in 2018.

The 16 Psyche, located about 230 million miles from Earth in the asteroid belt between Mars and Jupiter, is thought to be a protoplanet, or the remnant core of a planet that has begun to form and has failed.

Becker said she was able to observe the massive cosmic rock at two different points of its rotation, noting that it reflects at ultraviolet wavelengths.

“For the first time, we were able to identify on any asteroid what we think is an ultraviolet band of iron oxide absorption,” the researcher explained. “This is an indication that oxidation is occurring on the asteroid, which may be the result of the solar wind hitting the surface.”

16 Psyche has a diameter of 140 miles, making it one of the largest objects on the planet in the asteroid belt and one that can answer many unresolved questions about the formation of the solar system.

“What makes Psyche and other asteroids so interesting is that they are considered the building blocks of the solar system,” she added. “Understanding what the planet really is and potentially seeing its interior is fascinating. Once we get to Psyche, we will really find out if this is the case, even if it doesn’t turn out as we expect. Every time there is a surprise, it is always exciting. “

NASA intends to launch a mission to visit 16 Pysche in August 2022, arriving in early 2026, according to the agency’s website.

The 21-month mission will map and study the properties of the asteroid, with the main goal of “determining whether Psyche is really the core of an object the size of a planet.”