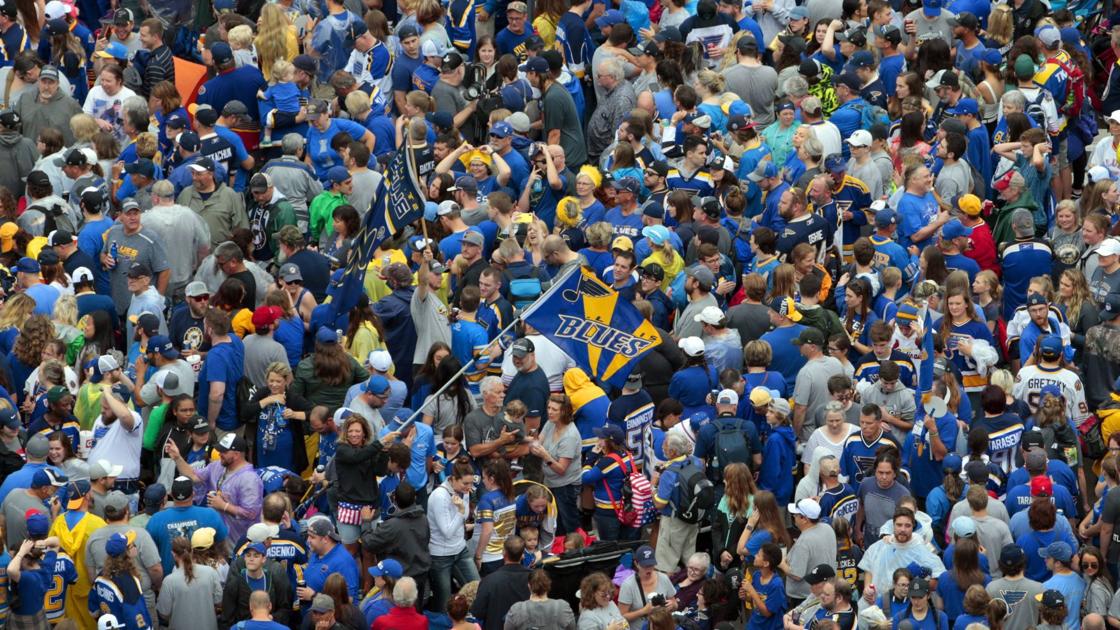 ST. Lewis – The broken rain was not a coincidence for the blue wave – and for the blue wave – which went down Market Street on Saturday, overflowing into the gate of the Arc, where the fans' sea roared for their champion hockey heroes. The Mississippi River would have been blue. "It's amazing to watch and see all this blue," said David Lawrence, a 37-year-old Godfrey guard officer who was among the tens of thousands of people in the festivities. , He said that the vision of Stanley's bowl in the center of the city was "a dream come true."

Others on the route, stretching from the 1

8th Street to Broadway, could do more than just see the Cup. "We really have to touch it," said Dan Albers, a retired UPS driver who returned to St. Louis, Florida, for the festivities. "It was surreal, I'm 57. I did not think it would ever happen."

"This is another step on the belt, where everyone understands us, and we stand up," said Jahie Eskiger, 28, of the university. The city after playing the trombone on stage during the musical performance of the new national anthem retired Charlie Glenn.

36-year-old Randy Sapiensa, from St. Louis, said under the arch that he has estimated that the crowd of "dead" is larger than the Cardinals won the World Series in 2011. "This is the biggest party St. Louis has ever seen," he said.

For Ben Munson, by O'Falan, Mo. sacrifice to provide a 5-year-old son with a close look at the team.

Munson planned to come to the center of the dawn when he heard in the news from 10 am on Friday night that Kinner Plaza was already filling. So he left his sleeping wife to take a seat on the sidewalk in front of the Stiffel Theater.

At first he and his chair. When the night was floating in the morning, he met his new neighbors. One of them was Bob Pinckley. He arrived from Crystal City with a crew of 15 people. His band doubled until mid-morning and snuggled under the thin tent during a heavy rain.

"We wanted to make sure we were on the front row to see the guys who have won. " I was waiting for my entire life for this Cup, "said Pinckley, who was born in 1967, the same year as Blues.

Mark Robinson of Kirkwood arrived at the arch, their children living out of town, expecting to be there

"And we can send them pictures," he said.

Robinson said the atmosphere of the parade was a continuation of the Playoffs watching games – a shared experience. absolutely this sort of collective relationship where you embrace people you do not even know, "he said for the two-month post.

Cody Fulkerson and Amanda Gregnar woke up at 5:30 am to get out of their home in Lin, Mo, near Jefferson City. Fulcherson said he could not imagine this end of the season, especially when the blues sink into the NHL's cellar in early January.

"This is a great story," he said. "Even for young children: Do not surrender."

"Energy is incredible," 47-year-old Gregnard said. "This is something that can bring people from all walks of life together … For St. Louis, I think this is something we need."

The blouses and the flags were visible throughout the route; The crowds were gathered together as their fanaticism inspired them to find ways to stand out – in blue-yellow castles, painted faces and Gloria outfit.

Brandon Breault Fully Engaged with Baby Blue Retirement Suit around 1970, Cowboy Hat He is slightly warm during his walk from his home in Lafayette Square, despite the cooler than the usual temperature

But that was totally worthwhile, he said. [326] Count, 32, wore it in honor of his father, the original owner of the suit, and to mark the last time the blues were in the Stanley Cup final.

"It's been 50 years, it just made sense," Breault said on the harvest and the blue victory.

Public transport and traffic jammed in the city center. At the time the parade began, the route and place of the rally were filled with people, sometimes with 30 deep.

80-year-old Lajani Hafli from Wyldewood, who made a bellin over the wall of the celebrities to shoot some of the players: the goalie and the other man.

In her excitement she was separated for a short while from her family. When the family reunited, the family understood the name of the other player: MVP Ryan O'Reilly

But all that Hafley got about his troubles are pictures of other people taking pictures. Nonetheless, she was glad that she was at the celebration in honor of her brother, who died five years ago.

"He was such a big fan, he would catch you in the head and beat you (kindly) if they did," said Hafli. He grew up in Belleville, playing street hockey and listening to Dan Kelly, who announced the radio games.

"I love cardinals, but blues have an edge," he said from his place at Kiener Plaza. passes and shots as well as teamwork

"There are many things that come into play," he said, and as a fan came with a lot of breakthrough not to the heart over the years

"Seeing them go so far, you understand how difficult it is to win everything," said Kaflin

Rhonda Rizzo, 55, falls in love with blues At the same time, she fell in love with her husband, Jim Rizzo, at age 52. He took her to her first game when they began to meet in the 1980s, and since then she has been a fan. Jim Rizzo, from Webster Grove. "St. Louis always gets a bad rap for things."

"It makes us proud that we are in St. Louis," said his friend Vicky Sanders.

As the blues rolled, many fans shouted "thank you" and "greetings," feelings that were returned by the players who knocked their chest and pointed back to the crowd. , converters and pick-up pickers, spraying beer and crowding the crowd with the familiar three bells that always lead to the roar of "Let's go, Blues!" Todd Medley, 47, from Fest, welcomes all this. The gangs, staff, heroes of his youth: Bernie Federico, Brett Hull, Al Mukinnis.

He held his 5-year-old Gadden, and the 10-year-old Camden moved around the rally and swore to the next generation of heroes: Jordan Binnington, Vladimir Tarasenko, Braden Sheen.

"That's all I thought was going to be," Medley said, his eyes dripping with tears.

The Kinneur Fountain The Runner by Zorach Gorffinkel The Lovers of the St. Louis Blues fall in the center of Market Street, expecting their champions from Stanley Cup on Saturday, June 15, 2019. Robert Cohen, Robert Cohen

Baumans on the parade route