The Cadence Review by Hyrule – IGN 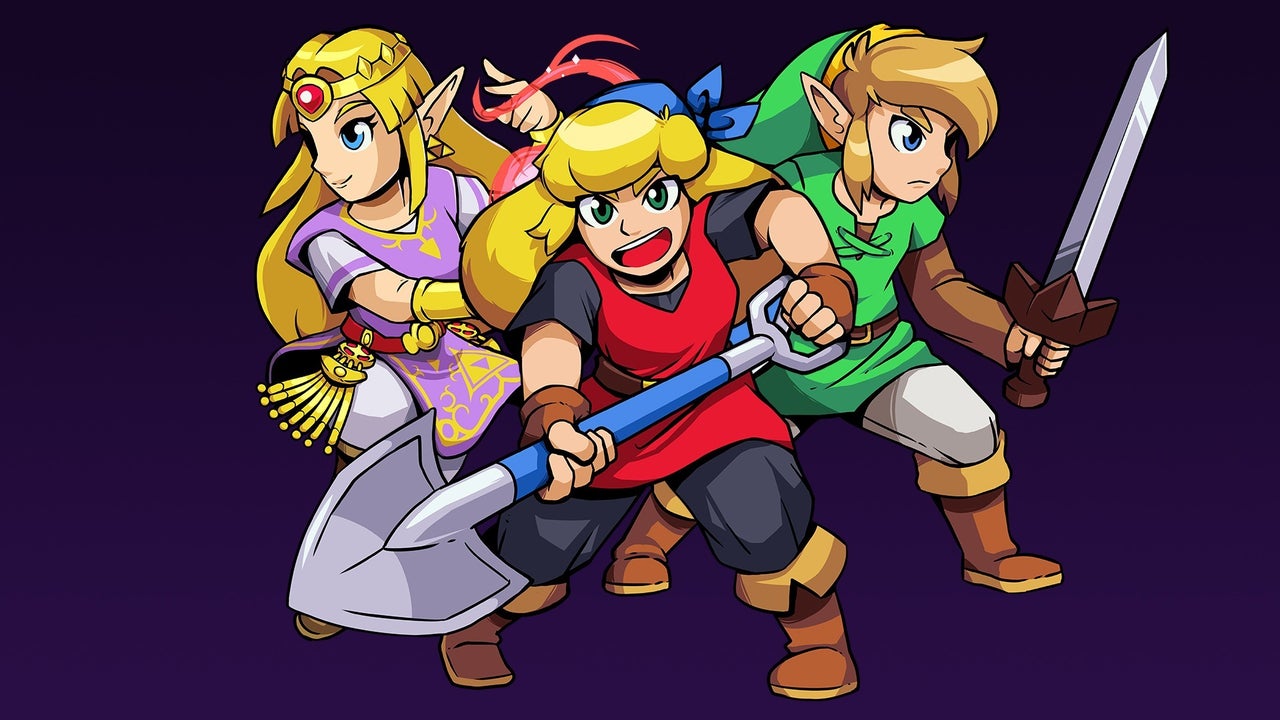 Dance like no one bears a sword on you.

It's easy to take a look at Hyrule's Cadence: Crypt of Necrodancer with the legend of Zelda and see a simple reskin of indie-baby with the look of one of the biggest names of games. But there is so much more than that. Cadence of Hyrule cleverly combines the rhythmic and horn elements of the Curse of the Necrodancer with the canonized world and the structure of classic Zelda games as a link to the past, bringing new fresh ideas to the two series.

Cadence of Hyrule advances and expands the rhythmic gameplay ideas of the original crypt of Necrodancer, applying them to a world of more than dungeons. On the other hand, he also feels like playing Zelda. This is not just because people and places are based on the past of the hyulles, but because they inspire the same sense of curiosity and whim. The result is the best scenario: the rhythm of the gameplay and the procedural generation of Necrodancer and the evergreen fun of The Legend of Zelda.

Each enemy moves and fights a unique pattern you have to remember, so you can "dance" to catch them without hitting, turning every enemy and combination of enemies into a fresh, fast-paced puzzle. The concept is as magical as in the Necropan's Crypt. Though constantly considering and solving new problems, the fight never feels like a conundrum: you act and react as you would in any action game, but you put these reactions to music. The whole process feels much more purposeful and therefore rewarding than the average hacker and slash experience.

The strike makes him feel more rewarding than the average hacker and slash experience.

Like so many legends of Zelda, Hyrule's Cadence has a fairly simple story, but has a unifying theme: Cadence, the hero of Crypt of Necrodancer, magically transported to Hyrule just in time to help Link and Zelda thwart Octavo, mostly a tasteless musical villain who takes over Hirole. Many of his central puzzles include recreation of classical songs by Ocarina of Time, and the four temple bosses are all Zelda enemies transformed to represent musical instruments that are also the treasures you need to gather to stop Octavo. It's a little on the nose, but it's never so aggressive that it loses its charm.

As a link or Zelda, you explore a relatively small Hyrule map and collect the tools just like you would in any Zelda game. This version of the world is primarily based on a link to the past, but elements, enemies and influences from many Zelda, 2D and 3D games abound. (Do not worry, there is only a small Tingle.)

Although Cadence on the map of Hyrule looks and feels like a world of Zelda, there is Necrodancer element: not entirely in stone. At the beginning of each new game the world's tiles are exchanged to create a new layout. However, this is not a wholesale randomization. Based on one complete tracking and two other partial areas, the individual areas ̵

1; shown as world map tiles, which typically represent a Hyrule value for a single screen – are not changed except for adding or removing walls when necessary, and to remain grouped in the environment. In general, I have not noticed that the world has been formed and reformed in this way, which is the best you can say about procedurally generated maps when you think about it.

Accidental crypts most often do not have smart designs in Zelda's best dungeons, but they still feel intense.

The dungeons, on the other hand, are completely procedurally generated away from the entrance to the center. They adhere to the tradition of Zelda because you need open locked doors and chests to find a map, compass and "big key" on the way to the boss's lair, but you feel much more like Necrodancer because their structure relies on tools such as shovels that are used to dig up some walls and torches to increase visibility in dark dungeons. There are even familiar tricks like hiding cavities filled with additional enemies in the walls to stumble. As a result, these crypts most often have no smart design in Zelda's best dungeons, but they still feel intense because they present Cadence to the most intense challenges in Hyrule's battle / puzzle.

Like in Necrodancer, when in battle you have to press buttons to move and act in time with the beat of the song. The music, which consists of piano and drum-rock remixes of Zelda's most iconic songs, is really fun to listen to, especially as a fan: I never knew a link to the past. in front, but it does. In addition to good sound, the soundtrack really mechanically emphasizes the rhythm. Besides, there is a visual representation of this rhythm at the bottom of the screen, which remains very useful for beginners and even for veterans with necronos.

This wrestling / puzzle solving process becomes a little more complicated in Hyrule's Cadence than it ever did in Necrodancer. In the real Zelda fashion, you can find a variety of key elements during your task, including Zelda braces like a boomerang, a bomb, a bow, and … Deku Leaf. Instead of a single sword upgrade path, you can find the full range of Necrodancer weapons, each of which changes the range of your attacks, including a copy that strikes two tiles directly in front of you, and a kiss that lets you move forward , when

It's enough to create the rough, rough-skinned tension that builds when you're on the verge of death.

Although you keep these things constantly, once you find them, some Recurring qualities of When you die, you lose all of your rupees and r including temporary boots, rings, shovels and torches.This effect adds death to death in Cadence of Hyrule Although the temporary elements are designed to be disposable – they also break with time so that the loss of that equipment never feels like a huge loss – it's enough to create the delicious tension in the style of the rough style that builds when you're on the brink of death and the hope of stumbling into the miraculous chain of healing hearts.

Having access to all those facilities, to all these possibilities, makes the struggle feel much more forgiving in Cadence than Hurrol than Necordans or even some of the older Zeldas. While I was dying during my game, I rarely found a situation that required too much finesse to overcome. The best players will be able to optimize their dance style for efficiency and speed, but novices should not have trouble going through a battle even if they miss a few steps.

When you defeat all your enemies in the area where you are no longer required to play music, and the ability to move as you wish, it makes making puzzles and turning back around the world much easier. Rampage is fun, but it slows down too much when enemies are not your primary concern.

This brings me to a relatively large irritation of Cadence: the difference between combat mode and study mode is hard binary – you either are in battle because there are "enemies" in the "room" in which you are or not there were times when I wanted to be more fluid. For example, there are several areas in the world – namely the dungeon areas that do not seem to change from game to play – that are larger than a single screen. In these areas you can be completely safe without seeing enemies, but still be forced to move in combat mode because there may be several monsters across the lake several screens. (Technically, you can turn off the motion based on the rhythm entirely, but it is not intended to turn on and off at will – and use it at all times, will make you switch to a different classification without a beat)

Cadence of Hyrule is a relatively short game – I only finished my first start in eight hours – but this randomization of the map means it is clearly intended to be repeated. There is a daily challenge mode, the ability to create custom games, a speedrunners rating, and a cooperative opportunity that does not seem as fun to me as the original Necrodancer crypt because it's harder to keep up with music when playing with someone else. However, these options take advantage of the procedural elements and give you more reason to repeat Hyrule's Cadence than most Zelda games.

The Cadence of Hyrule: The Crypt of the Necrodancer is a popular indie game for creating a fun little jump along the path of Nintendo's favorite franchise adventure. His rhythm-based combat is playful and fun, but also intelligent and tactical, making every step feel like the next step in solving a giant puzzle. Despite the use of procedural generation, its semi-randomized map evokes Hyrule's charms and inspires the same miracle. I think the best thing I can say about Hyrule's Cadence is that he absolutely deserves to be in the Zelda canon along with the best of his 2D games.