The CDC redefines “close contact” to include multiple short meetings 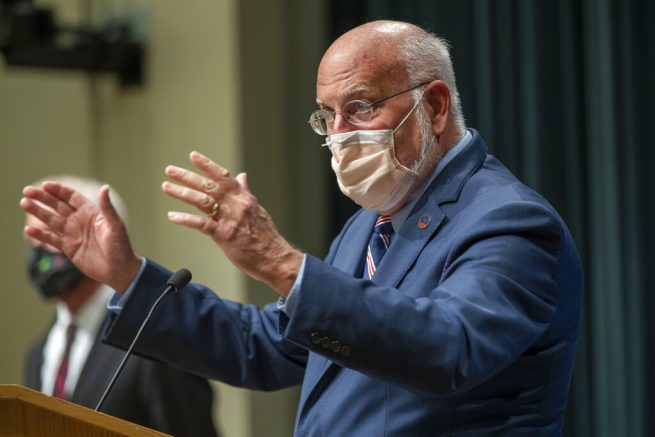 Dr. Robert R. Redfield, Director of the Centers for Disease Control and Prevention, spoke at a briefing on COVID-1

9 at the headquarters of the Centers for Disease Control and Prevention in Atlanta, Wednesday, October 21, 2020 (Alyssa Pointer / Atlanta Journal – Constitution through AP)

The Centers for Disease Control redefines what is considered “close contact” with a patient with COVID-19. The CDC released the updated guidelines on Wednesday, noting that people should be quarantined if they have multiple close encounters with an infected person for 15 minutes in a day.

The update came after a Vermont prison officer caught COVID-19 from inmates after several brief meetings with them that amounted to 17 minutes.

“There is some recent evidence that individuals who have had a series of shorter contacts but added up to more than 15 minutes over time have been found to be infected,” he explained. “And clarifying that the new science, the new data in our contact recommendations is what you’re alluding to.”

Officials stressed the importance of social distancing and wearing masks whenever possible.

The latest CDC report #COVIDView shows that the death rate attributed to # COVID19 has decreased since early September. However, some other indicators, such as the percentage of people who tested positive for the disease, have increased or remained stable: https://t.co/H9HqeA9y3S pic.twitter.com/5Qb8BLyfrt

Meanwhile, HHS Secretary Alex Hazard said the United States was approaching a vaccine by the end of the year.

RELATED: CDC under fire for flip flopping when aiming a mask

CDC to reduce the number of quarantine days

After 50 years together, the Jackson couple died of COVID-19 at the same minute